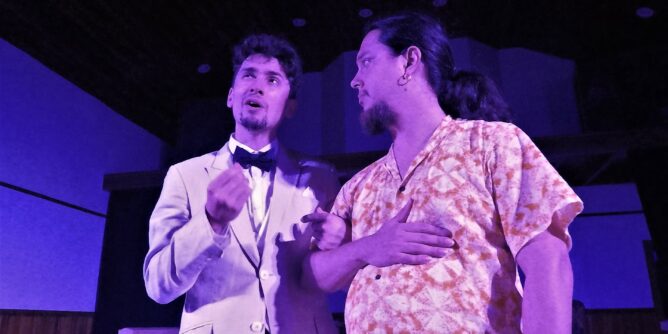 Actors’ Warehouse presents a play from Pulitzer Prize-winning playwright Nilo Cruz that shows just how complicated relationships can get.

Everyone loves a love triangle performed on stage. Who can forget such runaway Broadway hits as My Fair Lady or The Phantom of the Opera, where two people compete for one person’s affection.

In Cuban playwright Nilo Cruz’s romantic drama Beauty of the Father, opening Friday night at Actors’ Warehouse, the geometry gets a bit more, um, obtuse. There are two love triangles that intersect, forming what might best be described as a love rhombus — or is it a trapezoid? (Both are in the slang dictionary, we swear!)

And then, of course, for good measure there’s the restless ghost of real-life Spanish poet and folk hero Federico García Lorca hovering over all the polyamory.

“I think it’s a sexy play and it’s a poetic play,” said Carlos Francisco Asse, who is directing Beauty of the Father for Actors’ Warehouse. “It’s a play that very much puts us in touch with our feelings, who we are and how we relate to other people.”

The romantic setting is the Spanish coastal town of Salobreña, where a young woman named Marina arrives from the U.S. to visit her estranged father, Emiliano. a painter who left the girl and her mother 10 years earlier. The mother has recently died, and the heavy-hearted Marina has questions she needs answered.

Emiliano’s household includes his girlfriend, Paquita, and Karim, a young Moroccan man who also has a fondness for the bisexual Emiliano. To keep Karim from having to return to Morocco, Paquita has married him, but she loves only Emiliano. To further complicate matters, Marina immediately falls for Karim, and the feelings appear to be mutual.

“It’s very much like a telenovela,” said Diego Roberto Bermudez, who plays Emiliano. “It’s very powerful but very short-lived, like a fire. It lights up quickly, but it also goes out quite quickly.”

Throughout the play, Emiliano has conversations with Lorca’s ghost, played with distinction and playfulness by Manuel Marichal. Lorca, who was murdered in 1936, offers wisdom and sometimes levity to the stressed-out Emiliano.

“I’m kind of his subconscious,” Marichal said. “The character is important because it gives us a window into sort of the reality of an artist and the mental space that an artist is in.

“A lot of what my character does is have the conversation that one just has with oneself, but I happen to be a part of his brain that is also an artist who’s conflicted and torn at times.”

Cruz, the playwright, is best known for his Pulitzer Prize-winning play, Anna in the Tropics, about Cuban migrants working in a cigar factory in Tampa’s Ybor City during the Great Depression. He has written 14 other plays and collaborated on several orchestral and operatic productions.

Beauty of the Father had its world premiere in 2004 in Coral Gables and opened on Broadway two years later. Cruz then wrote a Spanish-language version of his play, which premiered in Miami in 2015. That’s when Asse first saw the production, and he was impressed by the script.

“He’s the first Latin American playwright to win the Pulitzer Prize,” Asse said. “He writes in a very poetic language. He’s got a lot of very beautiful images throughout [Beauty of the Father] that will resonate with people in love.”

Kara Gordon, a UF freshman majoring in theater, plays the young Marina in Beauty of the Father. In January, she performed in The Amish Project at the Star Center Theatre.

“Marina’s mother passed away before the story starts and she hasn’t seen her father since she was eight,” Gordon said. “She’s lonely and decides to seek him out after all these years in hopes of building their relationship again. She’s very bright, energetic and optimistic, but she does have a lot of conflicted feelings about her father.”

Olga Petrovic, who plays Paquita, said Emiliano struggles to deal with reality. Her character tries to keep him grounded.

“He’s imprisoned within himself, with his artistic soul,” Petrovic said. “He’s having a hard time adjusting to the real world. His wife left him because he probably wasn’t the perfect husband. We can guess why she left him.”

Petrovic previously performed in Jesus Hopped the ‘A’ Train (opposite Bermudez) at Actors’ Warehouse and Breaking Legs at Gainesville Community Playhouse (also directed by Asse).

Marichal, a Gainesville native and Princeton graduate, most recently performed in Time of My Life at GCP. Anthony Ransom, 21, a Miami native and Santa Fe College student, is making his stage debut as Karim in Beauty of the Father.

Meanwhile, the play is Asse’s final production in Gainesville. He has been hired as artistic director of the Bay Street Players in Eustis, northwest of Orlando.

Asse, 75, has lived in Gainesville for 50 years. He’s been designing sets and directing plays for the past 40 years, which adds up to hundreds of productions on practically every stage in town, including UF and Santa Fe College.

“Gainesville is my hometown and has been very good to me,” Asse said. “Of course I will miss Gainesville, but I have family here and will visit often.” 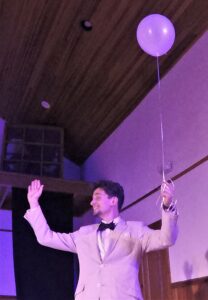 Performances: Thursday, Friday and Saturday at 8 p.m., Sunday at 3 p.m. through May 26.
Tickets: $20 general admission; $15 students and seniors.