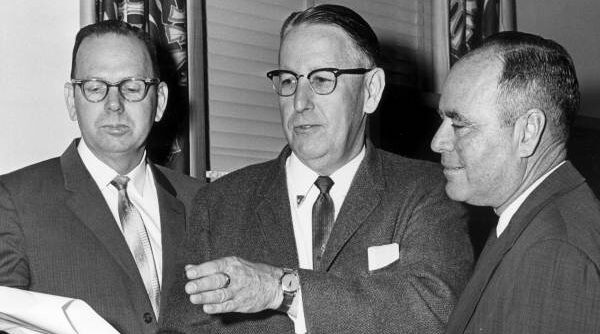 The new exhibit, “McCarthy Moment: The Johns Committee in Florida,” examines a time 60 years ago when gays were not welcome on campus.

It’s 2020 and the University of Florida prides itself on its strong relationship with LGBTQ+ students and faculty members. It’s fair to say a culture of tolerance and acceptance exists on campus and in the Gainesville community.

However, that wasn’t always the case.

For several years, beginning in 1958, a state-appointed panel known as The Johns Committee attempted to weed out homosexuals attending and teaching at UF. The university fired at least 14 professors following intense, deeply personal interrogations by the committee. An untold number of students withdrew from classes, fearing they would be outed for their sexual orientation.

The Matheson History Museum, 513 E. University Ave., looks back at that forgettable period in UF history in its newest exhibit, “McCarthy Moment: The Johns Committee in Florida.” The exhibit opens Tuesday in the museum’s Mary Ann Cofrin Exhibit Hall.

Kaitlyn Hof-Mahoney, the exhibit’s curator, did extensive research on The Johns Committee. She visited the State Library and Archives in Tallahassee and photographed about 1,500 documents on which she based much of her research. Many of the documents are redacted transcripts of the committee’s interrogations.

“One of the main things I discovered was how awful it was,” Hof-Mahoney said. “It was just heartbreaking. They were so cruel to the people they were interrogating. They really used intimidation and fear to try and get people to snitch on everybody else.”

At the center of the committee was Charley Eugene Johns, a state senator from Starke. Johns, a Democrat, served as Florida’s governor from 1953-55 following the death of Gov. Dan McCarty. He returned to the Senate after losing his election bid for governor.

Johns, a former railroad conductor and insurance agent, was a member of the so-called “Pork Chop Gang.” The bloc of 20 conservative North Florida legislators favored, among other things, racial segregation.

From the Pork Chop Gang was born the Florida Legislative Investigation Committee, more commonly known as The Johns Committee. The Florida Legislature formally established the committee in 1956, at the height of the Cold War and U.S. Sen. Joseph McCarthy’s hunt for communists.

“His work created the climate that allowed [The Johns Committee] to happen,” Hof-Mahoney said.

“There were just so many different targets the committee went for over a period of about 10 years,” she said. “They wanted to keep the NAACP from desegregating the schools, [but] the NAACP had really good lawyers and made the committee look really foolish.

“At that point is when they picked sort of an easier target because gay people didn’t have an overarching organization to help protect them. They were easier to intimidate.”

And because the University of Florida was within their districts, the committee — without opposition from then-UF president J. Wayne Reitz — started their interrogations on its campus. Many took place in a small room at the old University Police Department (UPD) building on Museum Road. Others took place off campus, including the Hotel Thomas downtown.

“It’s definitely a dark chapter of UF’s history, particularly because President Reitz was very cooperative with the committee,” Hof-Mahoney said. “It could’ve been because he was worried about budget cuts, because the legislature controlled the university’s funding. But it’s also possible that he agreed with what they were doing — that’s not really something I can say definitively.”

According to Hof-Mahoney, each interrogation included a main investigator, a member of the UPD and usually at least one other committee member. Sometimes Johns himself was among those asking probing questions about the subject’s sexual behavior. The subjects were reminded that engaging in homosexual acts was illegal.

The most striking element of the “McCarthy Moment” exhibit is the re-creation of a typical interrogation room complete with a old-fashioned tape recorder on a simple wooden table. The walls of the room are inscribed with questions, some sexual in nature, that were asked of the subjects.

The interrogation room is accessible past a curtain, but only after visitors are warned — twice — about the explicit content contained within the room.

“That was one of the things that I’ve been really struggling with with this exhibit is that I don’t really have any objects for it,” Hof-Mahoney said. “So I was thinking ‘What can I do to kind of counteract that?’ That’s when I had the idea of re-creating the interrogation room with the recording equipment.”

The curator admitted she’s “a little bit nervous” about what lies beyond the curtain, but that the story of The Johns Committee is incomplete unless people can see the language that forever altered so many lives.

“We certainly could have told the story without doing that, but it wouldn’t have been as impactful,” Hof-Mahoney said. “I wanted it to really help people understand what it must’ve been like for the people who’d been dragged into these interrogation rooms and asked all these horrible, pointed questions.”

Visitors are urged to read content warnings at the front of the gallery and the interrogation room itself before deciding to view the room.

In conjunction with the exhibit, the Matheson History Museum is presenting a talk by Sterling Watson, author of “The Committee,” on Thursday at 7 p.m. Watson’s book uses UF and The Johns Committee as the novel’s backdrop.

According to the book description, “‘The Committee’ pits friends against friends and threatens careers and lives in a struggle for the soul of a town, a university, and an ideal.”

There are currently two bills in the Florida legislature pushing for the state to officially apologize for the controversial actions of The Johns Committee.

Although The Johns Committee has been the focus of numerous newspaper articles and at least two documentaries, Hof-Mahoney said “I think it’s new to a lot of people in that they didn’t really know that this thing happened.”

“McCarthy Moment: The Johns Committee in Florida” continues into June and will return in August following a temporary summer exhibit at the Matheson History Museum.