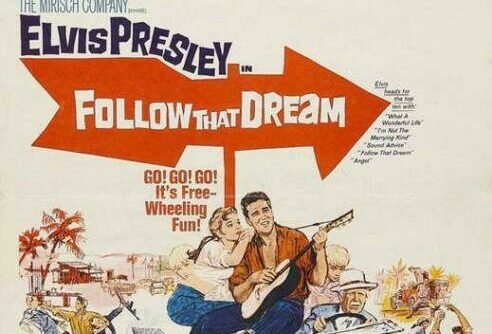 Tom Petty had no musical aspirations as a youngster until the day he met Elvis Presley. The rest is history.

Tom Petty was 10 years old when he met Elvis Presley on a movie set in Ocala. The brief encounter with the rock and roll sensation on that hot July day in 1961 ended up being a transformative moment for Petty and his love for music.

“Once he met Elvis, he keyed on him from that point on,” said Keith Harben, Petty’s childhood friend and neighbor in their northeast Gainesville neighborhood.

The story goes that Petty’s uncle, Earl Jernigan, took young Tom and his cousins to the movie set of Follow That Dream, starring Elvis and Anne Helm as his love interest. The scene that Petty attended was being filmed at the old Commercial Bank (now SunTrust) on East Silver Springs Boulevard in downtown Ocala.

In his book “Elvis Ignited: The Rise of an Icon in Florida,” author Bob Kealing quotes Petty’s reaction to seeing Elvis.

“He seemed to step out as radiant as an angel,” Petty said. “He seemed to glow and walk above the ground. It was like nothing I had ever seen in my life. …”

On Thursday, Kealing read from his book to an attentive audience at Heartwood Soundstage, where the Tom Petty Weekend was just getting started.

“Now you tell me [Tom Petty] wasn’t moved by meeting Elvis and then seeing him film the scene where Elvis and Anne Helm go into the bank in dungarees and [drive the] jalopy vehicle.”

The story of Petty meeting Elvis is legendary. But what many don’t know is what happened when Petty returned to Gainesville later that afternoon.

“His mother told me that Tom was going to see the movie set of Elvis with his uncle and that he would be home at 4, so I was down there by 4,” Harben said. “When he pulled up with his cousins, he got out the car and came eagerly over to me and shared his experience with me about seeing Elvis.”

Until that day, Petty was more familiar with Elvis’s movies than his music. But that was about to change, thanks to Harben.

“He was so excited about it, and I said, ‘Well, you know, Tom, I have some old records that my older sister had left me — a little rack of vinyl RCA 45 rpms of all Elvis.’ There had to be 20 of them on that little rack,” Harben said.

A trade was agreed upon and Petty spent hours and hours listening to those records on a small record player in his bedroom at his home at 1715 NE 6th Terrace.

Harben and Petty also would go to the Gainesville Shopping Center and check out Elvis’s albums at ther record store and glance through movie magazines.

“Tom just got totally immersed in everything Elvis,” Harben said. “Finally he got a better stereo and started acquiring LP albums and was able to stack them on his turntable. He sat there and listened to them over and over until he acquired an acoustical guitar at some point and started somewhat teaching himself how to play. He had a little white book.”

There was no turning back for Petty and his newfound fascination with Elvis — and music.

“It was a like a switch turned on for him,” Harben said. “It turned the light on in his head. It was just a magical moment for Tom.”

Harben looks back at those times with fondness.

“I wasn’t there in Ocala, but I was there in the moment that day with Tom sharing his excitement,” he said. “And I was also in the moment when he changed from being a total Elvis fan to a Beatles fan.”

It was now 1964 and the Beatles were coming to the U.S. for the first time to appear on the Ed Sullivan Show.

“Tom came down to my house and said ‘Keith, I was hearing on the radio they’re gonna play a new record at the Teen Time [now the Thelma Bolton Center] and it involves a group from England, and we’ve got to go down and listen to it.'”

Soon after, the boys stood there as the Beatles’ “I Want to Hold Your Hand” was played for the excited crowd.

“And that flipped the switch again and Tom became fascinated with the Beatles,” Harben said.

Kealing quotes Petty in his forthcoming book about the Beatles and their 1964 tour in Florida.

“You know, I saw them on the Ed Sullivan Show and all of the sudden I realized ‘I didn’t have to be Elvis.'”

Kealing said he would like to see Ocala erect a statue of Elvis and Petty to memorialize their 1961 encounter.

“I’m amazed that they haven’t already because this was the meeting of icons at that point in time.”