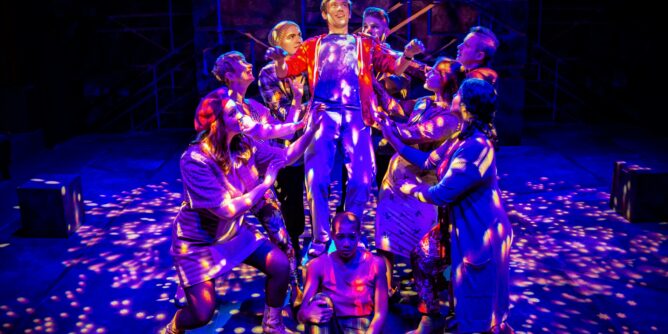 The Hippodrome and UF School of Theatre + Dance present “The Curious Incident of the Dog in the Night-Time” to open the 2019-20 mainstage season.

At 15, Christopher John Francis Boone is a self-proclaimed expert on the Milky Way, black holes and all matters of outer space. He also knows all the countries of the world and their capital cities, not to mention every prime number up to 7,057.

It’s not difficult to understand that Christopher functions on a different level than most kids his age. He even boasts: “I see everything most other people don’t notice …”

However, when blamed for the death of a neighbor’s dog, Christopher has no answers except for insisting to a police officer that “I did not kill the dog!”

That dramatic opening sequence sets into motion Christopher’s quest for answers to one mystery after another in The Curious Incident of the Dog in the Night-Time, the first production of the Hippodrome Theatre’s 47th season.

Opening Night is Friday at 8, but there are pay-what-you-can preview performances Wednesday and Thursday at 7 p.m. The show will have seven performances a week through Sept. 22.

“This play is about a 15-year-old boy who encounters the world neurologically, in terms of perception, in a very different way than other people do,” said Dr. Ralf Remshardt, professor of theatre at UF, who is directing The Curious Incident of the Dog in the Night-Time. “He’s just a beautifully written, great character.”

Based on an acclaimed 2003 novel by Mark Haddon, the Tony Award-winning play written by Simon Stephens is a collaboration between the Hippodrome and the UF School of Theatre + Dance. The two institutions have previously partnered on such productions as Avenue Q, Peter and the Starcatcher and, last year, The Wolves, which Remshardt co-directed.

Hippodrome newcomer Kyle Brumley, 29, plays the role of Christopher with boundless enthusiasm and the youthful innocence one might expect from a teenager on the autism spectrum.

“Christopher is probably one of the most intelligent characters that I’ve ever played and also one of the most inhibited socially,” Brumley said. “The sort of Venn diagram of myself and Christopher have some very interesting intersections — and I won’t go into them. I will say that it’s just been an incredible experience playing him and tapping into those parts of myself.”

In The Curious Incident of the Dog in the Night-Time, Christopher becomes fixated on solving the mystery of the dead dog despite the peculiar objections of his father. The boy’s interrogations take on the tone of Sherlock Holmes, which is only appropriate considering the play is set mostly in the city of Swindon in southwest England.

Things get interesting when Christopher discovers unopened letters sent to him by his mother, whom he had assumed to be dead. And thus begins a harrowing (at least, to Christopher) odyssey to the suburbs of London in search of more answers.

“I have no direct experience with somebody like Christopher, but he resonates deeply with me as a character,” Remshardt said. “His experiences are a kind of heightened version of what most of us feel when we enter into situations we don’t understand or confound us.”

The Curious Incident of the Dog in the Night-Time — and Christopher’s inner world — is further enhanced by an ingenious, contemporary set that utilizes LED lighting to outline specific spaces on the stage.

“When we’re in Swindon, the police station, school and other locales have their own outlines,” Remshardt said. “Christoper’s ‘habitat’ overlaps between Swindon and London.”

More than 400 feet of LED lighting runs through the stage in tracks built into the floor and back wall, according to Hippodrome artistic director Stephanie Lynge. She said Hipp set designer Mihai Cuipe, also a UF professor, began working on the designs with Remshardt back in June.

“We started building the set over a month ago — while we were running Million Dollar Quartet — and has taken our regular shop plus extra hands from UF [to complete],” Lynge said. “The challenge of creating how the world feels to Christopher leans heavily on sound and lights, so our designers are having to get very creative.”

Remshardt added: “The stage is, in some ways, a beautiful big brain — an art form, a kind of modeled consciousness … that lets you live inside his experiences.”

Lynge said she enjoys the annual co-production with the UF School of Theatre + Dance, including working with new and upcoming actors.

“I love the collaboration with UF,” she said. “By combining forces, we are able to bring a very complicated production to our stage, even in times of fiscally tight budgets. Everyone at the Hipp loves the ‘Co-Pro’ because of the energy and joy it always brings.”

Lynge, meanwhile, lent her expertise in choreography to the play’s creative movement. Look for the scene in which a toy space shuttle appears to fly above the stage and other scenes that create the illusion of a bustling railway station.

The Curious Incident of the Dog in the Night-Time is filled with visual gems to match its engaging script centered around Christopher and his unique perspective of the world around him.

“Christopher teaches me a little something every day,” Brumley said. “Every time I go through the play, I learn something new.”