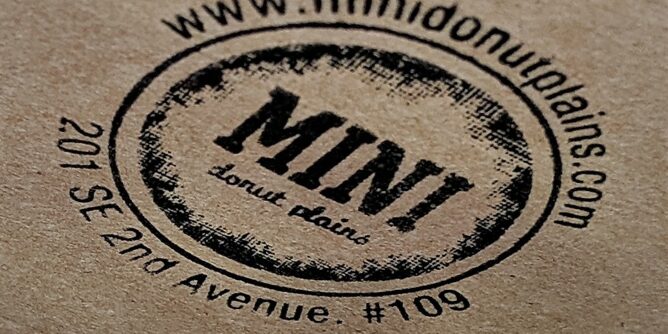 When happily married millennials Erin Ives and Nathan Rigney first shared their idea of opening a shop that sold miniature doughnuts and craft beer — and gave customers the option to play old video games — they were met with blank stares.

“We talked to her parents and my parents,” Rigney said, “and they just didn’t get it.”

Chalk it up to a generational thing.

Ives and Rigney stuck to their guns, however, and opened Mini Donut Plains earlier this month at 201 SE 2nd Ave., Suite 109, in downtown Gainesville’s Union Street Station. The shop is located directly behind Starbucks and across Southeast 2nd Place from the Sun Center and Hippodrome Theatre.

And how is Mini Donut Plains doing after three weeks of business?

“We’re a little bit busier than expected,” Rigney said, “so we’ll be hiring a third person.”

That’s great news to Ives, who arrives most days at 5 a.m. to make the doughnuts — about 42 dozen each day — before the shop opens at 7:30. Rigney relieves Ives late in the afternoon and closes the store at 10 p.m.

Then there’s the Maple Bacon, a vanilla cake with maple glaze and candied bacon, and the fairy-inspired Unicorn Farts, a vanilla cake with rainbow-colored galaxy glaze. Other doughnuts are topped with graham crackers, Fruity Pebbles, as well as peanut butter and marshmallow.

“Each doughnut is a cool little crafted flavor on its own,” Ives said.

Customers can down their doughnuts the traditional way, with hot- or cold-brewed Opus coffee or milk. They can also choose from a draft beer menu that has eight options, including Titan’s Haze IPA from First Magnitude Brewing Co., as well as a wine menu (by glass or bottle), craft sodas or Coke products.

Meanwhile, Mini Donut Plains has eight large screens, each with a pre-loaded console for retro Atari, Nintendo and PlayStation games that customers can play while enjoying their doughnuts and beverages. And speaking of video games, the term “Donut Plains” is also the second world of Dinosaur Land in the game Super Mario World.

“It’s a super-nerdy reference that most people will never catch,” Rigney said with a grin.

Mini Donut Plains is Gainesville’s first store devoted to customized miniature doughnuts, a craze that started almost a decade ago in California but has gained momentum in larger Florida cities in recent  years.

When they lived in Tampa a couple of years ago, Ives and Rigney frequented a shop that made and sold miniature doughnuts.

“We knew doughnuts were sort of trending all over the country, and it was big in Tampa,” Ives said.

The couple got married on St. Patrick’s Day 2018 and nixed a traditional wedding cake. Instead, they served guests 350 miniature doughnuts, many topped with Lucky Charms.

Ives, 30, and Rigney, 32, knew they didn’t want to start a business in Tampa. Both had attended college in Gainesville and enjoyed the smaller-town atmosphere as well as the area’s many natural wonders.

“We weren’t big-city people,” Ives said. “We both liked Gainesville the first time and decided this was more of our thing.”

Opening a specialized doughnut shop was just one of the couple’s “hare-brained” ideas. They had talked about a shop that made and sold mini-pies and even gave passing thought to opening an ax-throwing bar (yes, it’s a thing!) until they looked into liability issues.

“We were even talking about a video arcade but without food,” Rigney said.

When they saw the vacant storefront in Union Street Station, previously occupied by End Up Bar and Elixir Lounge Smoothie & Juice Bar, the couple easily visualized a business that combined their enjoyment of doughnuts, craft beer and video games.

Ives and Rigney have known each other since middle school in Englewood, near Sarasota. Neither majored in business in college. Ives earned an undergraduate degree in anthropology from UF and a graduate degree in library sciences. Rigney attended Santa Fe College but earned marketing and MIS degrees from USF in Tampa.

Ives’ only previous experience in the food industry was as a waitress during high school and after college.

“I knew how hard a full-scale restaurant would be,” she said.

Mini Donut Plains has a machine that automates the doughnut-making process. Ives then takes the vanilla- or chocolate-based cakes from the conveyor belt and gives each one their distinctive look and flavor.

Ives and Rigney plan to add new doughnut flavors to their menu, rotating one flavor out each week

Rigney, who also works at Greenway Health in Alachua, said he enjoys the looks on customers’ faces when they first enter Mini Donut Plains.

“Random people will come in and just be super stoked,” he said.