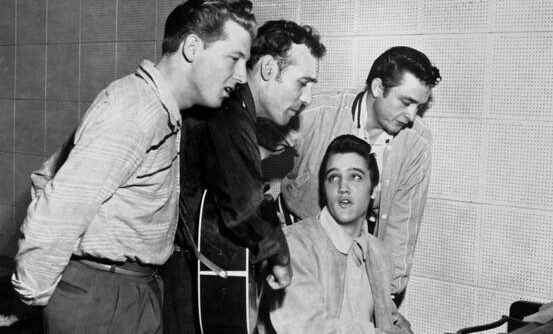 Growing up in Ohio, James Penca wasn’t all that familiar with the music of Johnny Cash, but there was one tune by “The Man in Black” he found quite amusing.

“I remember discovering ‘A Boy Named Sue’ at a very young age and thinking it was unbelievably funny,” Penca said.

Flash forward a couple of decades and Penca is now the new face — and voice — of Johnny Cash in the Hippodrome Theatre’s record-setting summer musical, Million Dollar Quartet.

Penca, 28, took over the role beginning with Tuesday night’s performance. He replaced Colin Barkell, who left the production to resume his budding music career in Nashville.

Hugh Hysell, the show’s director, said the change of performers in the middle of the run was not unexpected.

“We knew there was a possibility,” he said. “Colin has an album out and he had a number of events lined up that we didn’t know were going to solidify. We learned after opening [in late May] that there were a couple of things he had to do in July for the album.”

Hysell added that Barkell is now “in the running for something huge” but didn’t want to jinx it by being too specific.

Penca, who had just finished a two-month run of Million Dollar Quartet on Long Island, was ready to step in when called. He said his Hipp debut went “really well.”

“I was hyper-nervous because you don’t often find yourself in this position where you’re thrown into something so quickly,” he said. “The first show went swimmingly and then, of course, the second show I was a little bit more relaxed and that’s when I started to forget little things. Nothing huge, by any means, but little things that as an actor you go, ‘Aww, I wish I could have hit that a little bit better.'”

Penca performed in Million Dollar Quartet for the first time in 2018 in Weston, Vermont, and then reprised the role of Johnny Cash earlier this year at The Argyle Theatre in Babylon, New York.

“Had I never done Million Dollar Quartet before, I would’ve been a mess,” he said.

Barkell was an audience favorite with his tall frame, charming smile and bass-baritone voice. Penca is of average height, but his singing voice is just as deep when he sings “Folsom Prison Blues,” “I Walk the Line” and “Sixteen Tons” during Million Dollar Quartet.

“I got to see the show with Colin in it quite a few times,” Penca said. “If I had never done the role before, it would’ve been hard to watch someone else do it.”

Penca said he has borrowed some things from Barkell’s performance, but “because I have done this show so many times, I already have my own Johnny.”

He added: “I would say I’m very, very different. I might bring a little bit more angstiness, I guess. It’s hard to describe. …”

Million Dollar Quartet retells the story of an impromptu jam session that actually took place in 1956 at Sun Studio in Memphis involving rock and roll icons Cash, Elvis Presley, Carl Perkins and Jerry Lee Lewis. All had started their recording careers with Sun Records and producer Sam Phillips, who is the play’s central character and narrator.

The musical opened at the Hippodrome Theatre on May 31 and has been drawing record crowds for six weeks, outpacing 2015’s record-setting summer musical, Honky Tonk Angels.

“I think this show is about the joy that these iconic musicians felt when they made music, and that joy is infectious,” she said. “The audience can’t help smiling and feeling happy celebrating the music these amazing musicians created and the joyful spirit of their creativity.”

Hysell, who portrays Phillips in Million Dollar Quartet, has been pleased with the enthusiastic Gainesville audiences and that the production has been extended a second and final time, until Aug. 4.

“We often play to a totally full house — not a single ticket is available. — and it’s great!” he said. “Especially for this long of a run to be able to sustain this kind of sales. It shows that the piece is strong and the people are loving it.”

“I think this band of actors is sensational and delivering a show that’s worthy of being in New York,” said Hysell, who has also played the role of Phillips in the national touring show for Million Dollar Quartet. “We could transfer this show to off-Broadway and play it.”

Hysell said that if he hears laughter after delivering only his second line of the play, he knows the audience is on his side the rest of the show.

“I play Sam a little bit funnier than some others do,” he said. “I think it’s necessary to find the humor within the piece as much as you can because then the audience kind of is on Sam’s side. They’re gonna go with Sam wherever Sam takes them.”

As director, Hysell doesn’t want his actor-musicians to simply impersonate the characters they play.

“This isn’t a tribute show,” he said. “We’re creating this moment that really took place and none of us were there. There was a recording of it, but we’re not trying to duplicate who these people were. We’re trying to create the relationships that were taking place, the friendships, the celebration, the broken promises.”

In Million Dollar Quartet, the audience learns that Phillips took J.R. Cash under his wings at Sun Records and changed his name to Johnny Cash to sell more records. He also encouraged Cash to go from singing his original country-gospel songs to writing tunes that appealed to a broader audience.

“I was very honest with him,” Phillips told Rolling Stone magazine in a 1986 interview. I told [Cash], “Man, I love this, but God, I can’t sell [gospel], and if I can’t sell it, you and me can’t be in business.’ And I instructed him to use some of that talent in the secular world.”

Penca grew up a Beatles fan and didn’t have a particular interest in Johnny Cash until he landed his first role in Million Dollar Quartet more than a year ago.

“When I had to start learning the music, I found that I knew all the songs already just because who doesn’t know ‘Folsom Prison Blues’ or hasn’t heard ‘I Walk the Line’ at least twice in their lives,” he said. “And ‘Sixteen Tons’ — that’s just a song everyone is born knowing already, but no one knows where it came from.”

Penca said that, oddly enough, Million Dollar Quartet has helped to deepen his appreciation for the Beatles, which he didn’t think was possible.

“The Beatles covered a lot of songs that are in this show,” he said. “They did a lot of Carl Perkins songs, like ‘Matchbox’ and ‘Honey Don’t.’ They would’ve been Johnny Cash fans when they were making their music, so it kind of all fits together.”

Hysell agreed, saying The Fab Four found their inspiration from early rock and roll of the Million Dollar Quartet.

“The people who came out of Sun Studio were their idols,” he said. “The root of all of their early music comes from Sun Studio. So, in a way, we’re … the Beatles!”

Penca organizes Beatles-related events in New York City. He often plays his guitar in Central Park’s Strawberry Fields section, where there is an “Imagine” mosaic that pays tribute to John Lennon. Penca even started an annual Beatles Festival 10 years ago at his alma mater, Baldwin Wallace University in Berea, Ohio.

“I have Beatles projects always going,” he said. “It’s my area of expertise.”

But for the next four weeks, Penca has no plans except to play his heart out as Johnny Cash in Million Dollar Quartet at the Hippodrome Theatre.