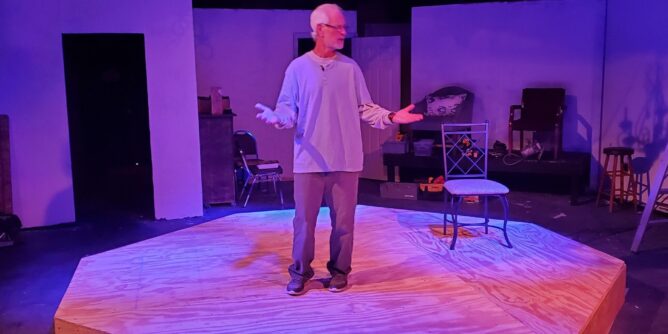 The veteran Gainesville actor takes audiences on a personal journey in “Seven Sides of Shakespeare” at the Acrosstown Repertory Theatre.

Most coaches give their athletes pep talks before games. Veteran actor Shamrock McShane has a similar ritual with fellow performers before each show.

“I have a saying that I began — and I’m proud of being the originator of it — that whenever we’re backstage and about to go on, I say ‘Hurt the people!'” McShane said. “That’s really our mission when we step out on stage — to hurt them. There’s got to be some pain involved.”

Fortunately, McShane is referring to “psychical pain” rather than physical pain. He then explains the allegory of “Plato’s Cave,” in which people in chains are fooled into believing that shadows they see on a cave wall are reality and cannot be convinced otherwise.

“You have to make people open up their eyes,” McShane said, “or they will never, ever know the truth.”

For the next two weekends, McShane hopes to achieve that goal by making himself vulnerable. Without a set and without props, he’ll perform an original one-man show, Seven Sides of Shakespeare, at the Acrosstown Repertory Theatre, 619 S. Main St. (in the Baird Center).

Opening night is Friday at 8 p.m. There are also performances Saturday at 8 p.m. and Sunday at 2 p.m. followed by three more shows March 6-8.

In the play that he wrote, McShane shares intimate details about his 50-year love affair with one William Shakespeare. As the title implies, McShane’s play is a journey through seven roles from seven Shakespearean plays in which the actor has performed.

“I wanted to put together something I could do by myself, and it just so happens that having spent all these years doing Shakespeare that it should amount to something,” McShane said. “He’s good. He’s really good!”

Here are the seven Shakespeare characters McShane has played, in order, and to whom he pays homage:

> Mercutio, Romeo’s dearest and wittiest friend in Romeo and Juliet.

> Oberon, King of the Fairies in the woods of A Midsummer Night’s Dream.

> Malvolio, the steward to Lady Olivia in Twelfth Night who puts the sick in sycophancy.

> Macbeth, antihero of the most dangerous play in the world.

> Jaques, the court cynic of As You Like It.

But Seven Sides of Shakespeare is not merely a recital of lines from plays. Many actors could pull that off (though probably not very well), but it wouldn’t necessarily make for engaging theatre.

McShane, however, injects the play with insightfulness and anecdotes about his life journey that began in rural Illinois and later took him to Chicago, Key West and eventually to Gainesville. Put in context, the Shakespeare material glistens.

In the opening scene, for example, McShane reminisces about his very first Shakespearean role at the Gill Community Arts Theatre in Chicago’s Old Town neighborhood. He was 22 and fresh out of Northern Illinois University.

Director Patrick O’Gara hand-picked McShane for the role of Mercutio in Romeo and Juliet. McShane’s roommate also was cast.

“That’s when I realized I was in love with Shakespeare,” McShane tells the audience.

McShane had already taken a keen interest in the Bard by watching a television broadcast of King Lear, a Shakespeare in the Park production on PBS starring James Earl Jones and Raul Julia.

“They were so fascinating — they just captivated me,” McShane said. “I’m watching these people act [and] I have no idea what they’re saying, but I’m still following the story. I’m thinking ‘How can this be happening?!'”

Oddly enough, two decades passed before McShane landed another Shakespeare role. He was in his early 40s and had made his way to Alachua County after “wasting” seven years in Key West. He taught and coached girls basketball at Hawthorne High School and dabbled in community theater on the side.

He latched on with the Acrosstown Repertory Theatre and soon had his second Shakespeare role as Oberon in A Midsummer Night’s Dream followed by Malvolio in Twelfth Night. And then came Macbeth, which, true to tradition, was a drama mired in drama.

“Macbeth is where the dream turns into a nightmare,” McShane explains in his play, adding “I was on the biggest ego trip of all time.”

McShane not only cast himself in the title role, but his leading lady was an Equity actor who threatened to quit the show. Unforeseen circumstances forced the play outdoors to the downtown community plaza and to Thornebrook Village. Also, McShane’s first marriage was on the rocks, but that might’ve been unrelated to the Scottish curse.

This is the Shamrock Show, there’s no question about it.
— Tom Miller, director of Seven Sides of Shakespeare

In Seven Sides of Shakespeare, McShane takes the audience into the confessional and asks for forgiveness.

“This is the Shamrock Show, there’s no question about it,” said Tom Miller, who’s directing Seven Sides of Shakespeare. “It’s a tour de force from a unique, singular actor who’s had a unique, singular life. Shamrock McShane is an actor of unparalleled talent and generosity and trust. To work with him is such a privilege. He’s spellbinding.”

“And I thought, ‘Well, I like that idea, but I could do something entirely different with the little anecdotes in between.’ So, that’s what I did,” McShane said. “Somebody doing scenes from Shakespeare? Well, that goes back to, you know, Shakespeare.”

McShane, 67, is retired from public education. He spent 20 years as a Language Arts teacher at Westwood Middle School in Gainesville. He’s stayed busy in recent years with acting, perhaps most notably as the womanizing retiree Joe (aka Mr. Midnight) in Bobbitt’s Sunset Village and as abolitionist John Brown in In Splendid Error. He’s also written a book, “Hall of Fools,” about his 30 years of teaching in public schools, and about two dozen plays, including one titled Holy Shit.

McShane realizes that not everyone has the same affection for Shakespeare as he does, but all he requests is that people open their minds to the Bard when they come to see Seven Sides of Shakespeare.

“The experience of acting him is that you wonder ‘What is this magic? How does this magic work? because you look at that mass of words that the actor has to say and when you first confront them, it’s ‘Is this English? Some of these words I know, but I don’t even see how they fit together.'”

“As soon as you start to hear it, and your lips and your tongue end up going through the exercise of saying it, you say, well, ‘This is just how I breathe. What’s the deal here?’ to the point to when you get onstage, the words seem to say themselves somehow. It’s pretty amazing.”

And, if McShane says those words the way he wants you want to hear them in Seven Sides of Shakespeare, it might hurt just a little.

Performances: Fridays and Saturdays at 8 p.m., Sundays at 2 p.m. through March 8.

If you attend the production, please let us know what you think of it by Leaving a Reply below.