The Gainesville playwright, fresh off another trip to New York, is bringing his play about a swinging retirement community across town to Gainesville Community Playhouse.

Just when you thought it was safe to visit sweet, innocent grandma in her “active” retirement community again, Michael Presley Bobbitt is reintroducing Gainesville audiences to the seamy underworld of Sunset Village.

The play about a naive widow discovering the sexually-charged shenanigans in a Florida adult community opens at the Gainesville Community Playhouse on Friday night and continues for three weeks.

If you recall, Bobbitt wrote the play last year and premiered it with an all-Gainesville cast during the 2018 Broadway Bound Theatre Festival in New York City. Anna Marie Kirkpatrick played the recently widowed Edna and Shamrock McShane starred as ladies’ man Joe (aka Mr. Midnight).

Bobbitt then brought the show back to Gainesville, where it set attendance records last fall during a three-week run at the Acrosstown Repertory Theater.

Thanks to the play’s success, the Gainesville Community Playhouse chose to open its 2019-20 season with Sunset Village. And this time around, Bobbitt gets to direct his own play.

Anyone who attended the show at the Acrosstown Repertory Theatre during its successful run there will notice some changes this time around, most notably five new cast members and a full set that includes — spoiler alert — a golf cart.

Earlier this week, we sat down with Bobbitt before a rehearsal of Sunset Village at the GCP to get the full scoop on the production:

What can audiences expect in this “revival” of Sunset Village?

MPB: Because Sunset Village was originally a festival show in New York City, we had to do a bare-bones, teared-down version of it — sort of a black-box version. What’s different about this is we have a big budget and we’re in a bigger, world-class facility. We’ve spared no expense to make it an immersive set. We have an onstage golf cart whereas with the last show [at the Acrosstown] you had to imagine the world you were in.

MPB: Anna Marie Kirkpatrick and Shamrock McShane are reprising their roles, so Edna and Mr. Midnight are the same from the New York run. Great Grandma Carolyne, played by Gay Hale, is also reprising her role, but the other five cast members are all new. It’s nice to have a foundation of folks who know the play inside and out, but it’s also nice to have some fresh blood to sort of breathe new life into the play.

And now you are director of Sunset Village?

MPB: That’s right. Tom Miller directed the first two versions of the show, and he was stellar. What he did was wonderful and terrific, and I was honored to have him. But I get to be the director this time, so every tiny little thing that I ever imagined or envisioned for the play when I wrote it, I get to put it out on the stage. This has been thrilling for me. So if it’s terrible, it’s entirely my fault!

MPB: I thought it would be impossible to replace Jan Cohen (as Louise), Kristen Mercer (Mikayla) and Cindy Weldon Lasley (Norma) because they embodied their roles and we spent half a year together crafting their characters together, traveling to New York and then opening in Florida. I was so sentimental and attached to them I didn’t even know where to begin to replace them. I thought for sure this show would have to suffer, but we’ve just hit the jackpot. Lisa Varvel is playing Mikayla Foxx. She’ll rip your guts out and hand them to you. She’s so heartbreakingly terrific in this role. And we were able to get Mandy Fugate, who’s one of my favorite actors, to play Louise. I described it to someone that if Jan Cohen’s Louise slowly sliced you up throughout the play, then Mandy Fugate’s Louise stabs you with a dagger 100 times in the face! She’s so acerbic and quick and smart and funny. And we have a newcomer to the Gainesville theater world named Julia Lunardo who plays Norma with such grace and poise and elegance that you almost can’t believe her character is actually in a wild, swinging open marriage. The juxtaposition of her gracefulness and the alternative lifestyle of her character is thrilling to watch.

And who else is new to the cast?

MPB: Well, I thought it would be impossible to replace Ian Hales as Tommy, the activity director. He was the comedic glue that held the whole show together. But then we stumbled upon Josh Evangelista, who’s a theater major at the University of Florida. He’s picked up exactly where Ian left off and found new moments of funny that I didn’t even know were in the script, plus he’s a joy to be around. My wife, Laura Jackson, had played Andrea the Realtor, and that was a crushing loss to me not having my wife around because she’s such a steadying influence and an incredible actor. But we were able to get Olga Petrovic. She’s just hysterical as a Russian-sounding Realtor, and her way of articulating words in the script is so much funnier than what I wrote. She makes the part better with her accent and her affectations.

So, how did Sunset Village end up at the Gainesville Community Playhouse?

MPB: They have a submission process here where you can submit plays. I was fortunate enough that Susan Christophy, who is on the executive committee here, happened to see the show at the Acrosstown and loved it. That was sort of my entrance into knowing the folks here and getting to pick the plan for the play and what I thought I could do for the theater and what I thought I had to offer the organization. It’s been nice because a lot of times theaters in town consider one another rivals. To my knowledge, it’s never happened that one theater has put on a show the very next year after a rival theater has put on. Here’s a very interesting thing that’s happened: A crew of GCP folks led by Dan Christophy and Susan Christophy are putting on a big musical at the Acrosstown right now called Jekyll & Hyde while I’m an Acrosstown guy and I’m putting on my big show here. Their crew has been here helping me work on the set and I’ve been over there helping them work on their set with people who would not maybe ordinarily interact. It’s been a nice blending of the artistic community and I feel really excited to be a part of that.

Is the GCP audience ready for Sunset Village and all its sexual references?

MPB: What’s great about bringing Sunset Village to the GCP is that it’s an entirely different patron base than what I’ve been used to over at the Acrosstown. There are a lot of older, professional-type folks that come here, and I’m excited to titillate them a little bit — maybe even shock them a little bit — in Sunset Village. …. I love the Acrosstown and I’m on the board and helped renovate that whole place. It got me my start as a playwright. It’s a 68-seat, black-box theater, and I love how intimate it is. But the GCP is a 210-seat, world-class facility that you never see in a town the size of Gainesville. This is a cultural treasure. And I think a lot of folks like me over at the Acrosstown sort of had a snooty view of the GCP. “Oh, that’s where they just do all the Broadway musicals and they don’t take any chances.” Well, they took a chance on a dumb redneck from a trailer in an orange grove from Polk County to put on his play here. And in getting to know these people — and I’m on the executive committee here now — this plac is full of serious artists and they’re trying their best to keep a gigantic artistic organization open with very little public funding, and they’re kicking ass at it. And I’m  tickled to death to be a part of it.

Have you received anymore input about Sunset Village during the past year?

MPB: Yes. When we came back from New York last year, I took some of the feedback I got from the industry professionals and worked on revising the play before we put it on in Gainesville. And then it was a historic production. It was the first play in the 39-year history of the Acrosstown to sell out every single seat. We brought in bonus chairs and sold out all of those seats. We added bonus days and we sold out those days, and something like a thousand people were on our waiting list who couldn’t get tickets. That show was a singular type of success, but I went to work trying to make it better. I went to work with all the notes I took during that production, trying to sharpen the narrative as much as I could. I’m excited to say that the artistic director of the ART Station Theater outside Atlanta, an amazing Equity house theater in Stone Mountain, is coming the second weekend to preview the show to potentially put on in their season. It’s pretty exciting.

What about The Villages, the real-life community that inspired Sunset Village?

MPB: We had a whole busload come up for the last production and they loved it! They said I captured a subsection of their culture and captured it perfectly. Someone said, “You know, we’re more than what you make us out to be,” and I’m okay with that. I’m telling a story about a particular version of The Villages, and maybe not even The Villages. It’s really a heightened, spoofed version of The Villages. We’ve got a big advertising campaign going on in The Villages in their daily newspaper and on their online community bulletin board to advertise to get them to come up for the show. We’re expecting a big response. 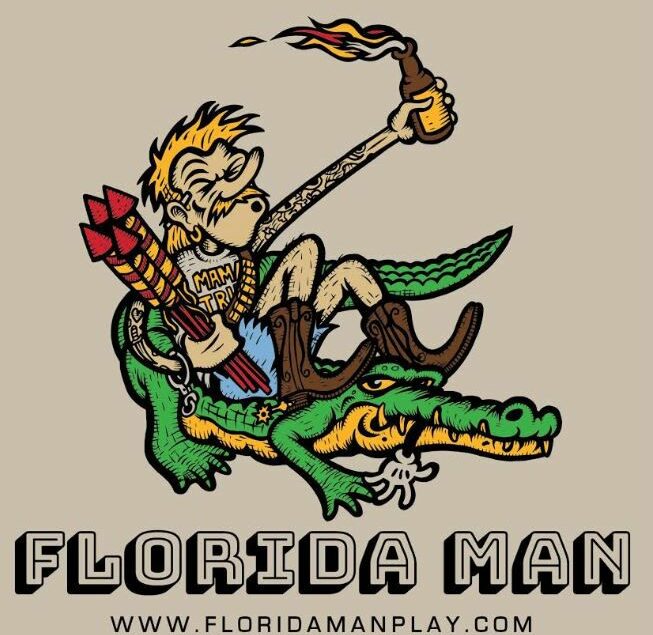 And now you’re getting ready to give Gainesville Florida Man, which you also produced off-Broadway?

Yes. Auditions are September 15 and 16. It opens October 25 at the Acrosstown and we’ve already sold a massive number of tickets. We expect the entire run to be sold out well ahead of opening night. So definitely go to acrosstown.org if you want to buy tickets because it’s going to sell out and it’s going to be a cultural phenomenon again. One reviewer in New York said it was “a surprisingly poignant love story told in the most unlikeliest places.” I couldn’t believe the reaction that we had and the crowds that we had. And I couldn’t believe the number of folks from Gainesville who flew up to support the play.

For further info about Sunset Village, including tickets and showtimes, visit the Gainesville Community Playhouse website.

1 thought on “Q&A with Michael Presley Bobbitt: The Phenomenon of ‘Sunset Village’”