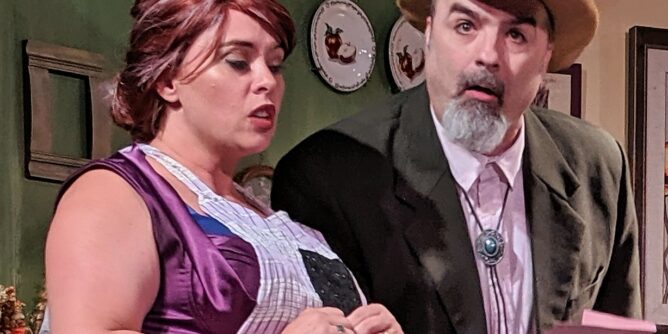 The Acrosstown Repertory Theatre demolishes the fourth wall with a whodunit that makes everyone in the room a prime suspect for murder.

In July, the Acrosstown Repertory Theatre goes macabre when it presents Macbeth as its annual Summer Shakes production.

Before that bloodbath begins, however, the downtown theater is deadly serious about making you laugh, chuckle, chortle, giggle, guffaw, moan, groan, hoot and possibly howl with the outrageous comedy You Have the Right to Remain Dead.

The play, written by Pat Cook, is an audience-participation murder mystery that refuses to take itself seriously. Well, except to make you slap your knees from all the buffoonery, tomfoolery, hijinks, nonsense, mischief and shenanigans taking place onstage.

(Why, it’s enough zaniness to make a reviewer reach for the thesaurus.)

You Have the Right to Remain Dead opens Friday night at the Acrosstown, 619 S. Main St. (in the Historic Baird Center). There are also performances Saturday at 8 p.m. and Sunday at 2 p.m. followed by three performances a week through June 23. There’s also a $5 (cash-only) preview performance Thursday at 8 p.m.

“It’s set in the Deep South and features a lot of the familiar comedic tropes,” said Aleksandr Wilde, making his ART directorial debut with You Have the Right to Remain Dead. “It reminds me a little of Clue. … All the clues [to solving the murder] are in there.”

The play within a play begins with snooty narrator Harnell Chesterton (Zachary Simon) warning the audience: “All is not as it seems … Don’t assume … don’t take anything for granted.”

Before you know it, chaos ensues when the cast of Southern characters — no doubt recruited from The Dukes of Hazzard, Smokey and the Bandit and perhaps Hee-Haw — tries to figure out why a certain character in their small community theater play is now dead as a doornail.

When Officer Bainbridge (Justin Clement) arrives on the scene to sort things out, everyone becomes a suspect, including the actors performing the play, frazzled director Blanche LaToure (Jordan Corley), nerdy theater tech Trudy Marsh (Nicole Mooradian) and everyone in the audience.

That’s right. If you attend You Have the Right to Remain Dead at the Acrosstown, Officer Bainbridge will happily read you your Miranda rights. In return, the audience gets to question the cast with the goal of solving the homicide.

Wilde pitched You Have the Right to Remain Dead to the ART’s play-selection committee last year after performing in the play 15 years ago as a member of the Hippodrome Theatre’s Summer Spectacular camp for kids.

“It’s always been in the back of my mind as a show I’d like to direct someday,” he said. “It’s a show that’s perfectly suited for this intimate space.”

Wilde added that there is no hidden agenda in staging You Have the Right to Remain Dead.

“I told the board the show has no deeper meaning or political statement,” he said. “There’s a lot to be said for community building through comedy.”

With its 2018-19 season soon drawing to a close, the Acrosstown Repertory Theatre recently announced its lineup of shows for 2019-20. Of particular note is the world premiere of Florida Man by Michael Presley Bobbitt (Sunset Village) in October and moving the Gainesville Homegrown Playwrights’ Showcase from late fall to the spring.

You Have the Right to Remain Dead
Acrosstown Repertory Theatre
619 S. Main St.
(in the Historic Baird Center)
Gainesville, FL 32601