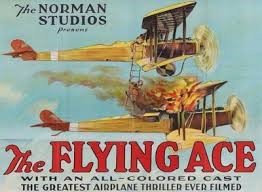 The new exhibit tells the story of Norman Studios, which began in Jacksonville a century ago and specialized in making films featuring all-black casts.

In this age when technological advances are occurring at breakneck speed, the Cade Museum of Creativity & Invention is dialing things back to a more simple and quieter time — the silent-film era of a century ago.

In its newest exhibit, “The Flying Ace,” the Cade takes visitors back to the early 1900s, when Jacksonville was known as “The Winter Film Capital of the World.” And, more specifically, when Norman Studios was producing “race films” that used all-black actors cast in non-stereotypical roles during the Jim Crow era.

“There was a market for African Americans who wanted to see films that depicted them in positive ways,” said Barbara Wingo, the Norman Studios Silent Film Museum vice president who worked with the Cade Museum to establish “The Flying Ace” exhibit.

The exhibit features the 75-minute silent film, The Flying Ace, that runs on a continuous loop. It is the only complete film from Norman Studios still in existence.

Visitors can also read about the history of Norman Studios and its owner, Richard E. Norman Jr., and view artifacts from the silent-film era, including a Magic Lantern, a Baby Pathescope 9.55 mm projector and camera, as well as intertitle cards and items from the old Eagle Film Manufacturing Co. in Jacksonville.

Norman, a white man, was an inventor, entrepreneur and artist who saw a need to make race films, especially after 1915’s Birth of a Nation showed viciously racist portrayals of blacks. That Norman made his films in the segregated Deep South only made things more interesting.

“It’s a story that just has to be shared and told,” said Phoebe Cade Miles, co-founder of the museum and daughter of Dr. Robert Cade, who invented Gatorade more than 50 years ago.

Miles added that the exhibit, which continues through August in the museum’s upper level, is a perfect complement to the museum’s current six-week Aviation theme in the Rotunda as well as the Optics, Film & Photography theme that begins July 10.

“Our mission is to transform communities by inspiring and equipping the next generation of inventors, entrepreneurs and visionaries,” Miles said. “Every generation builds on inventions of previous generations, and it’s important to introduce people to inventions and teach them about the inventive mindset.”

Wingo said the goal of “The Flying Ace” exhibit is twofold. One is to tell the story of Jacksonville’s early role in the silent-film industry that involved some 30 production companies and included the Eagle Film Manufacturing Co., or “Eagle City,” in the historic Arlington neighborhood. The other goal is to share the story of Richard Norman’s film-making career with emphasis on his 1926 film, The Flying Ace.

The movie was filmed at the Norman Studios complex and other locales, including Mayport. Despite the aviation subject of the film, no stunt pilots were required because of Norman’s ingenuity led to the simulation of the air-combat stunts long before CGI came along.

The lead character in Norman’s mystery/adventure film is a World War I flying ace (Lawrence Criner) returning to his role as a railroad detective. The film concludes with the hero solving the mystery of a missing railroad payroll and rescuing the heroine (Kathryn Bush) from the villain’s (Steve Reynolds) burning plane.

Norman produced, directed, shot and edited The Flying Ace and all other Norman Studios films, including The Bull-Dogger (1921) and The Crimson Skull (1922)

Norman’s five-building complex, now a National Historic Landmark, survives in Jacksonville’s Old Arlington neighborhood, but it is not yet open as a museum. The mission of the Norman Studios Silent Film Museum board is to preserve, present and promote the history of silent motion pictures and race films through the reunification and restoration of the Norman Studios complex as a museum, education, film and community center.

To draw attention to the Norman Studios project, the Cade Museum will host a special screening of The Flying Ace on June 28 from 6-8 p.m. that will feature live music accompanying the film.