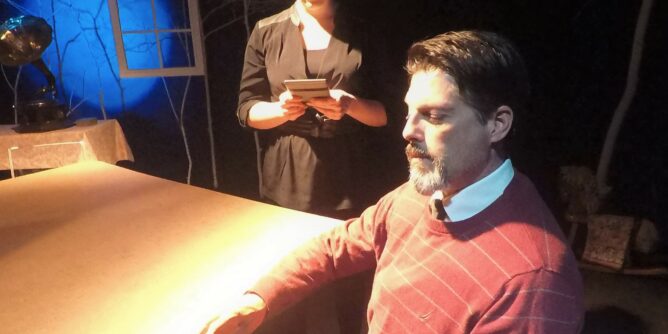 The Acrosstown Repertory Theatre presents Jennifer Haley’s disturbing but engrossing play about a virtual-reality world where every line is blurred.

For anyone not already familiar with the dystopian stage drama The Nether, opening this week at the Acrosstown Repertory Theatre, director Jennifer Hutton would like to clue you in.

That is to say the play, written by Jennifer Haley, combines the technology-driven world of the Netflix sci-fi series with the sordidness of the long-running NBC drama that addresses sex crimes of every nature.

And if that sounds a bit creepy, well, The Nether isn’t exactly a feel-good story. Bring along a sweater, because the dark subject matter will likely give you chills.

“The Nether explores what it means to become someone else and act out your deepest desires, sometimes with real-world consequences,” Hutton said.

You can peer into The Nether for the next three weekends at the Acrosstown, 619 S. Main St. (in the Historic Baird Center). There are performances on Friday (Opening Night) and Saturday at 8 p.m. and Sunday at 2 p.m. through May 12. There’s a $5 (cash-only) preview performance on Thursday night.

In the near future, the Nether is a similar but much more evolved version of the Internet, where individuals can log in to go to work, to school, see friends — and live fantasy lives.

The play begins with an interrogation between no-nonsense Detective Morris (Andrea Young) and a middle-aged businessman named Sims (Jorge DeJesus). Morris has uncovered some disturbing details about The Hideaway, a virtual and oddly Victorian world that Sims (aka Papa) has created so that adults can experience their wildest, most lurid fantasies involving children.

Morris also interviews an unnerved man named Doyle (Jesse Vale), a client of The Hideaway and a real-world science teacher with much at stake. The play’s setting frequently switches to The Hideaway, where we meet Papa, a new Hideaway guest by the peculiar name of Woodnut (Zachary Simon) and young Iris (Erin Little), an avatar who is the object of attention and affection of Hideaway clients.

In one scene, Iris helps a sheepish Woodnut feel more at ease in The Hideaway by inviting him to play a childhood game of jacks, a disturbing reminder of her age and innocence.

Although compelling theater, The Nether and its exploration of pedophilia is not for the squeamish.

“It’s definitely not a comedy,” DeJesus said about The Nether. “There will be some guilty laughter by what is said, but it’s going to make you think about things.”

DeJesus, who most recently performed in Boy and The Effect at Actors’ Warehouse, described The Hideaway as “a little pocket resort” in the vast Nether.

“My character created this place with the intention of doing anything you want to do without any consequences,” he said. “The Nether Police want to shut him down. His argument is ‘If it’s not real, why should it be illegal?’

“I’m not condoning that type of behavior, by any means, but I do like the argument that makes you think on the other side.”

Young’s Detective Morris threatens to shut down The Hideaway while raising questions about her motives.

“She’s not perfect,” Young said. “She has emotions and a history that she’s trying to set aside from pursuing justice. She has this narrow focus of what’s right or wrong, and part of that is because of her past.”

Young said Haley’s script is ingenious in that each member of the ensemble has a backstory.

“You can really pick any character and say ‘That’s a good person’ or ‘That’s a bad person,'” Young said. “It’s not obvious there’s a hero. It’s a lot like life.”

Young, who recently starred as Mary Shelley in the ART’s Bloody Poetry, said The Nether raises issues similar to the present-day net neutrality debate over whether there should be an open Internet.

“To talk about stuff like that is important,” she said. “This play brings up a lot of discussions but not necessarily answers.”

Hutton first read Haley’s script more than a year ago. The themes of technology, thought-policing, and an attraction to simpler times resonated with her. She submitted The Nether to the Acrosstown’s play-selection committee and received a mostly positive response.

“It is dark, but it’s also really different — a little bit sci-fi, a little bit of a thriller, a little bit controversial,” she said. “It’s not like anything I usually see on Gainesville stages and, really, the Acrosstown is the best fit for a show like this. It’s an intimate space, and it’s an organization that’s willing to take a little bit of a risk.”

Hutton said it was important to her to not stage The Nether with bias.

“Our cast really worked hard to ensure that we kept blurring the lines between right and wrong, acceptable and unacceptable,” she said. “I know getting into the heads of these characters was not an easy task, and they’ve all risen to the challenge with grace and aplomb.”

Vale returns to the Acrosstown stage after performing as the Narrator and Mysterious Man in Into the Woods. Simon made his Acrosstown debut earlier this year as Tilton in In Splendid Error.

Of special note in The Nether is Erin Little’s portrayal of Iris. Little, 14, a student at Howard Bishop Middle School, plays the young girl with just the right amount of sweet innocence but also adherence to The Hideaway’s strict rules of conduct.

Also noteworthy is the set design by Hutton and Kaitie Graves, with help from Michael Presley Bobbitt; lighting by Carolyne Salt; sound by Salt and Hutton; and costume design and construction by Young, Hutton and Shelli Osborne.

Those who attend the show will also be impressed by the interrogation table that, with just a few hinges, flips open into a bed.

“While telling my mother [Pam Hutton] about the challenges the play presented, she suggested building a Murphy bed-like set piece that would do double duty and speed up transitions,” the director said. “I sketched up the design and made a mock-up, and my husband and I built the final piece, which is working like a dream!”

Hutton said The Nether is not a far-fetched notion. In fact, some elements of the story already exist in today’s world.

“Most people are already looking for ways to escape their real lives, and many use games, VR, social media and web forums to become another person, to experience something different, to live a life not reflective of who they actually are, but rather who they want to be,” she said.

“Once technology catches up with human desire, I don’t think the world of The Nether will be too far out of reach.” 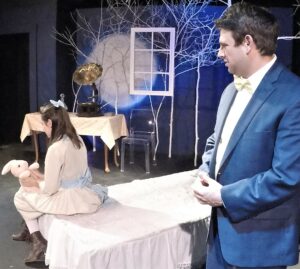