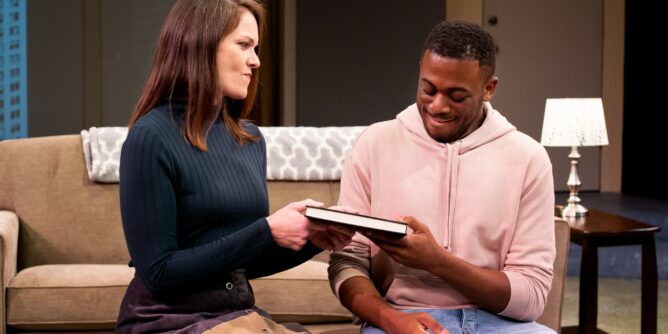 The play follows two writers who can’t keep their hands off each other but whose desires also include being accepted into the literary world.

In the opening scene of Sex with Strangers, 40-something Olivia is visibly annoyed when her solitude at a remote writer’s retreat is disrupted by the arrival of 25-year-old Ethan — in the middle of a blizzard, no less.

“There’s no signal here,” she informs him as he fidgets with his suddenly not-so-smartphone.

It would appear Olivia is referring to the weak WiFi at the lodge where the two are snowed in alone. But she might as well be talking about the communication gap between herself and the suave gentleman almost a generation her junior.

It doesn’t take long, however, before there’s wine being devoured and more than Ethan’s phone battery charging. Soon, they get frisky, begin to shed clothing, and …

Oh, don’t worry. The Hippodrome Theatre hasn’t sold its soul to the devil to rake in a few extra bucks in these financially lean times. Although Laura Eason’s play that opens Friday night has a provocative title and is intended strictly for adult audiences, Sex with Strangers is an engaging piece of theater with an actual plot — and even a message or two.

“I think the title captures everyone’s attention, but the play itself, at the end of the day, is not about sex,” said director Stephanie Lynge, the Hipp’s new artistic director. “It’s about connections. It’s about striving and grasping for what you want. And there is passion, but it’s not just passion physically, it’s passion about writing, about each other’s talents.”

You see, Olivia and Ethan are both writers, but from opposite ends of the literary spectrum.

Olivia is a novelist who’s now teaching the craft to college kids because her first book years ago got panned and dealt a blow to her ego. She has finished a new manuscript but is reluctant to publish it for fear of more failure.

Ethan, on the other hand, has already been on the New York Times bestseller list for a book he wrote titled “Sex with Strangers,” based directly off his autobiographical (and graphic) sex blog. The sketchy “internet memoir,” as Ethan calls it, followed his sexploits of sleeping with a different woman every week for a year. There’s even a movie deal.

“Girls hung out with you to be written about in a blog?” an incredulous Olivia asks.

But here’s the catch. Ethan respects Olivia’s work and desires her wisdom and knowledge to help him become a legitimate writer. Olivia needs Ethan’s command of technology to jump-start her writing career. (Yes, there’s an app for that!)

Before Sex with Strangers is all over, the dialogue-driven narrative will have audience members choosing whose side they’re on.

“It’s a beautifully complex script,” Lynge said. “It’s hyperrealism. It’s like you’re sitting in someone’s living room and it’s two people going through things that, at least at some level, we’ve all gone through.”

Marquis D. Gibson returns to the Hippodrome mainstage to play Ethan. His previous role at the theater was in last year’s The Christians as the evangelical Associate Pastor Joshua.

In his role in Sex with Strangers, Gibson said Ethan is worried about being pigeonholed as a sex blogger, which he realizes is writing at its lowest form.

“He’s very ambitious in what he wants, and he’s struggling to make sure that he isn’t seen as just one thing,” Gibson said. “I love being able to go into the other parts of Ethan that might not be on the surface because on the surface he could just seem, you know, like an asshole.”

Nichole Hamilton, a member of the Hippodrome Acting Company who most recently had the title role in Becky’s New Car, is playing Olivia for the second time. She also starred in Sex with Strangers two summers ago at the Wellfleet Harbor Actors Theater in Massachusetts.

Hamilton said she easily relates to Olivia, who is rightfully skeptical of Ethan at first only to let her guard down — well, until an eye-popping scene at the end of the first act and his dubious behavior in the second act that emboldens her.

“I think I’m a little more, for the most part, guarded until I get to know someone and feel that trust is there,” Hamilton said. “I think a lot of women can relate to not trusting, but I’m like ‘I’m going to give this person the benefit of a doubt and then see where that gets me. ‘”

In Sex with Strangers, an inquisitive Ethan gets Olivia to open up to him by seeking answers to probing questions.

“There’s this kind of symbiosis that happens and because of that, on top of the physical intimacy, we delve into a kind of a deeper, very complicated relationship very quickly,” Gibson said.

Old-school Olivia scoffs at the idea of publishing her work as an e-book. Heck, her manuscript still resides in the ancient realm of Microsoft Word 97.

“I think I’m more adaptive than Olivia is to technology, but I am more old fashioned [than most people],” Hamilton said. “People ask me about Kindles. ‘Have you downloaded the whatever?’ and I’ll be like ‘I’d rather have this book in my hand.'”

Eason’s script, written nearly a decade ago — long before the #MeToo movement and the Brett Kavanaugh hearings — touches on misogyny, fame and other relevant topics. The playwright is sensitive enough to allow both voices to be heard.

“I love her writing because it’s so honest and funny and really layered,” Lynge said. “It’s about the heart at the end of the day.  It’s got a lot of everything. It’s about being an artist, and what does that mean? It’s about that honesty and it’s about technology and all sorts of things like that.”

Another impressive feature of the Hipp’s production of Sex with Strangers is an elaborate set change at intermission. The cozy writer’s retreat in rural Michigan, complete with the effect of falling snow outside the window, becomes Olivia’s high-rise apartment in Chicago with a cityscape view.

“The set is complicated, but we have amazing artists here who know how to get creative,” Lynge said.

It’s notable that Sex with Strangers was a late substitute in the Hippodrome’s 2018-19 season. The theater had originally scheduled Ayad Akhtar’s award-winning Disgraced in the late spring slot.

“We decided to substitute Disgraced with Sex with Strangers for financial reasons,” Lynge said. “We are are still recovering from the state cutting our funding so drastically and Disgraced is a beautiful [but] expensive script. The casting would be expensive, the set would be very expensive, and we were just not in a position right now to do it right.”

Lynge said the Hippodrome will produce Disgraced “when we can do it right,” but Sex with Strangers was a smart replacement.

“Sex with Strangers was a beautifully nuanced script with a powerful, very emotionally packed story that we could do right right now, with a small cast,” she said.