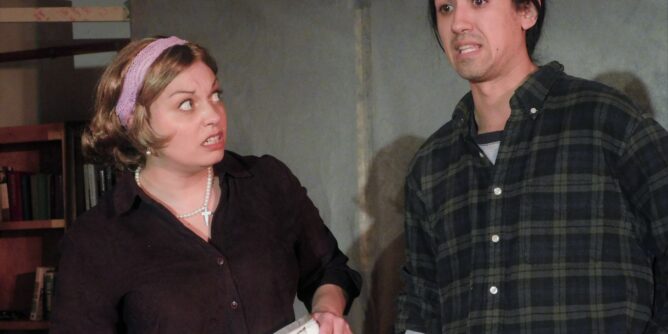 The dark comedy from Gainesville playwright Jane Edwards about a woman exposed to more than the elements makes its stage debut at Actors’ Warehouse.

Jane Arrowsmith Edwards experienced a bizarre story. Now she’s about to share the strange tale — or at least an exaggerated version of it — in her original play Under A Liar’s Moon.

A number of years ago, Edwards offered to work on an oyster boat docked in the North Carolina coastal community of Swan Quarter. It was the type of place where folks pumped their own water and chopped their own wood to keep their antebellum homes warm.

On one frigid winter night, Edwards got stranded in a blizzard and sought refuge in the home of a local family. Some neighbors joined them to conserve resources.

“Everybody bought any firewood they had and we were running short on food,” she said. “The old house had gaps in the walls where the wind blew through. We woke up with snow on our blankets!”

But the most startling occurrence was when the husband of the host family decided the blizzard was an ideal time to reveal he was having an affair and planned to leave his family once the storm ended. Edwards, a writing major in college, took copious notes.

Several decades later, the notes she took during that blizzard became the basis for Under A Liar’s Moon.

“I actually used some of the verbatim lines from being snowed in together,” Edwards said.

The play opens this week at Actors’ Warehouse, 619 NE 1st St., as the first installment of the theater’s New Works Series by local playwrights.

“It’s exciting to see what other people do with these words,” Edwards said during a recent rehearsal for the play. “This is my first full production.”

The story follows Rhetta (Lola Bond), a character based on a younger Edwards, who becomes marooned in a home inhabited by the adulterous but charming Willy (Austin Light), his pregnant wife Lily (Rachel Cockrell) who finds comfort in a large cardboard box and their precocious 10-year-old daughter Mimi (Channing O’Halloran) who wears more makeup than Tammy Faye Bakker ever imagined.

And then there’s Gramps (Malcolm Sanford), who suffered a brain injury in World War II and claims to be an alien. But because he calls things like they are, the old man might just be the closest thing to normal in the entire bunch.

“Rhetta has been in a car wreck because of the storm and is still disoriented when she gets to the house,” said Kathy Byrne, director of Under A Liar’s Moon. “Everything there is so absurd that she wonders whether she’s going crazy.”

Of course, Rhetta has to confront her own issues as the story unfolds. Her life is at a turning point.

“She’s shaken from the accident, but she’s a kind of a salt-of-the-earth kind of person,” Bond said. “She is not disillusioned by the world.”

Although the play has dramatic elements, Under A Liar’s Moon clearly falls under the category of dark comedy, according to Byrne.

“Willy is constantly entertaining,” she said. “The absurdity of the situation contains humor because Rhetta is trapped in this bizarre world where an old man climbs out windows in storms and thinks he’s an alien. It is a world where the controlling force in the home [Willy] has created an environment where he talks about his affair openly and expects everyone to keep laughing, acting out stories, and singing.”

Byrne, who once taught Theatre Appreciation at UF, added: “It’s not a drama because it ends on a hopeful note where characters can change for the better. We have hope for rebirth rather than destruction.”

An early, one-act version of Under A Liar’s Moon was performed as a stage reading during the 2017 Gainesville Local Homegrown Playwrights’ Showcase at the Acrosstown Repertory Theatre. Now it’s a two-act play with more character development — and one more character.

“I expanded it — I wanted to include more humor,” Edwards said. “It was already dark — so dark that it took my breath away — and I wanted to make it into a dark comedy. I added the grandfather for comic relief.”

She more or less hand-picked Byrne to direct Under A Liar’s Moon. Edwards saw Byrne direct Arsenic and Old Lace last year at the High Springs Playhouse and was impressed.

“She’s fabulous!” Edwards said of Byrne. “She’s so patient. She’s done it for so long, she knows how to draw the best performances from the actors.”

Byrne said she has enjoyed working with Edwards on tweaking the script for Under A Liar’s Moon.

“I like things that are unusual and a little magical,” Byrne said. “There are all these references to the moon. And the weather is like another character in the play.”

But it’s Rhetta, Willy, Lilly, Mimi and Grandpa who have the speaking roles in Under A Liar’s Moon.

“Audience members will relate to somebody in this play, whether they know someone who drinks too much and is narcissistic, or a pregnant mother who’s been abandoned or a little girl who’s scared because she doesn’t understand the adult world and doesn’t want her dad to leave,” Byrne said.

And, of course who can’t relate to a grandfather who insists he’s an alien? 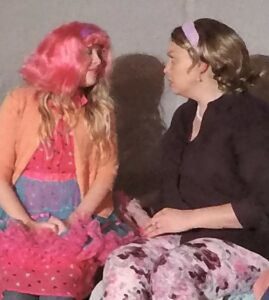