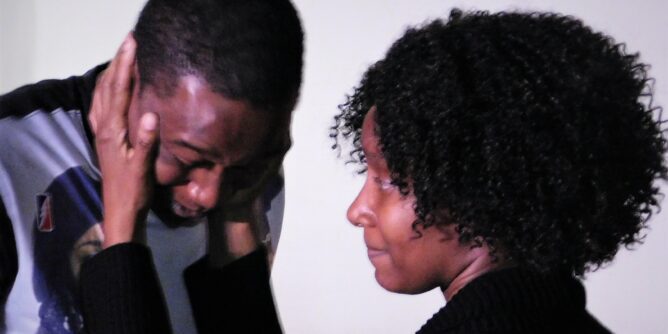 The downtown theater presents another powerful play that addresses issues of class and race in the American education system.

Before seeing the play Pipeline by Dominique Morisseau, opening this week at the Actors’ Warehouse, it’s important to have an understanding of a disturbing phenomenon many young black men experience every day in the U.S.

It’s known as the “school-to-prison pipeline,” the disproportionate tendency of minors and young adults from disadvantaged backgrounds to become incarcerated due to zero-tolerance school and municipal policies.

“It’s not just a theory — it’s a very real thing,” said Amanda Edwards, who plays Nya, an inner-city high school teacher and the exhausted mother of an at-risk teenage boy in Pipeline.

Nya’s son, Omari, attends a mostly white boarding school where he has the best opportunity to further himself. However, an altercation with a teacher during a discussion of Richard Wright’s provocative novel “Native Son” jeopardizes everything Omari and his mother have worked toward. The confused and dispirited Omari thus becomes yet another prime candidate for the pipeline.

The opening performance for Pipeline is Thursday at 8 p.m. There will be four shows a week through March 31. Thanks to a grant from the Florida Humanities Council, there is free admission to all Thursday and Friday night performances.

Pipeline is the second half of the AW’s groundbreaking program, “The American Black Experience: Then and Now.” The “then” was February’s The Colored Door at the Train Depot, a play that told the story of Anna Mac Clarke, the first black woman to lead an all-white unit of the Women’s Army Auxiliary Corps during World War II.

The “now” is Pipeline because of its relevant topic.

“It’s a play of immediacy because of subject matter and a general failure of public education to be truly public and/or  educational,” said Bradley T. Hicks, who is directing Pipeline for Actors’ Warehouse.

“The pipeline is something that does not just affect Northern, urban or minority-majority communities. It affects so many, and it does not always discriminate the way we expect it to. The prisons — especially when allowed to be for-profit prisons — will take anybody who slips through the cracks.”

K. Leo Anderson, who plays Omari, said his character will be relatable to many younger people who see Pipeline because he’s trying to find his place in the world as a young black man.

Anderson, 25, identifies with Omari and his predicament of dealing with “black rage.”

“There have been situations where I’ve been the only black kid in the room and where you have to say things,” he said.

“I knew as soon as I saw it that I wanted to direct it at the AW,” Hicks said. “[Steven] was on board almost immediately.”

The mission of Actors’ Warehouse is to entertain, inspire and foster critical thinking through the performing arts while bringing diversity programming, social justice and public health to the forefront.

Pipeline accomplishes that mission on all levels, he said.

“The school-to-prison pipeline is something that is very topical in our society right now,” he said. “The term has been around awhile, but I think it’s gained a lot of traction in recent years. Our local NAACP has led discussions on this topic in the past.”

Although Pipeline is about Omari’s plight, the central figure is Nya, who both as a mother and an educator struggles with both sides of the issue.

“She’s hanging on by a thread,” said Edwards, who also played the central character in The Colored Door at the Train Depot. “Nya is desperate yet strong. As a teacher in an urban school, she has encountered many Omaris. She’s seen what happens when they get into the pipeline.”

“The cast gets all the credit for the creations of their characters,” Hicks said. “Their dedication to the story was remarkable in making this play pop off the stage.”

Hicks invites the community to not only watch Pipeline but to become engaged. All Sunday matinee performances will include a post-show Learning Exchange.

“I’d like to encourage everyone who sees the play to continue the conversation,” he said. “This play raises so many questions about how we can all treat each other better, on so many levels of society — and personally.  Don’t expect easy answers, but come ready to have your curiosity piqued.” 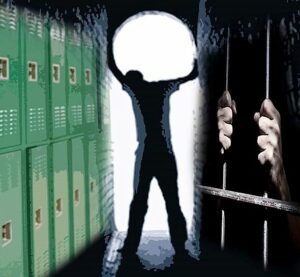 Performances: Thursdays, Fridays and Saturdays at 8 p.m., Sundays at 3 p.m. through March 31.
Tickets: $20 general admission; $15 students and seniors. Admission to all Friday and Saturday performances is free thanks in part to a grant from the Florida Humanities Council.

Please let us know what you think about Pipeline by posting a comment in the Leave a Reply section below.