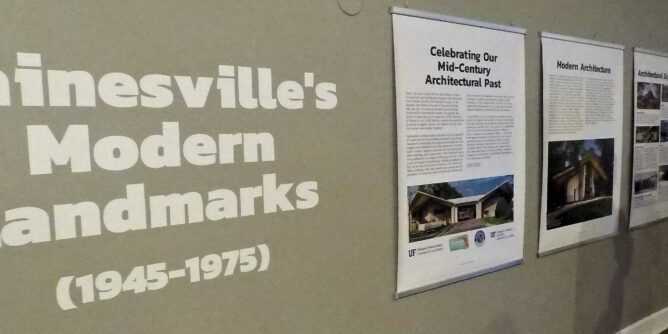 A new exhibit at the Matheson History Museum looks at a 30-year period of architecture that helped shape Gainesville into the city it has become.

Anyone familiar with Gainesville already knows about the city’s most notable historic structures, including the Thomas Center, the Hippodrome Theatre (formerly the U.S. Post Office) and the many iconic red-brick buildings on the UF campus — all at least 100 years old.

However, Gainesville also has numerous “modern” structures — homes, churches and educational buildings — that were constructed in the decades after World War II that are worthy of historic status because of their distinctive architecture.

Those buildings are highlighted in a new exhibit at the Matheson History Museum titled “Gainesville’s Modern Landmarks: Celebrating Our Mid-Century Architectural Past [1945-1975].”

“‘Modern’ is a broad term that encompasses many different styles and architectural expressions,” said Morris “Marty” Hylton III, director of UF’s Historic Preservation Programs and president of Gainesville Modern. “In general, it’s a lot of experimentation with materials.”

The exhibit highlights the results of a city-wide inventory of properties and neighborhoods from the postwar period completed as a partnership between the City of Gainesville, UF’s Historic Preservation Program, Gainesville Modern and the Matheson History Museum. Coordinated by Gainesville Modern, the survey was completed over the past two years by students and volunteers — a group affectionately known as the “G-Mod Squad.”

The Matheson History Museum hosted an opening reception for the exhibit on Thursday night. A standing-room-only crowd heard Hylton talk about the importance of preserving Gainesville’s Mid-Century Modern architectural gems. He lamented the recent demolition of St. Michael’s Episcopal Church in northwest Gainesville for which he had written the landmark nomination.

“It was against the owners’ wishes and they made end-runs around our [city] ordinances,” Hylton said.

Gainesville Modern is a non-profit organization that advocates for the preservation of Gainesville’s Mid-Century Modern architecture and promotes the city’s future architecture through education, advocacy and awareness.

The event at the Matheson Museum kicked off the 6th annual Gainesville Modern Weekend that will also include a Drinks & Dwellings VIP Cocktail Party on Friday from 6-9 p.m. at a private residence in northwest Gainesville’s Floral Park neighborhood. (Tickets are $75 and available through gainesvillemodern.org.)

Earlier this week, Ron and Barbara Marshall drove the 2,300 miles from Palm Springs to Gainesville to speak at Thursday night’s opening reception at the Matheson Museum. They talked about their book titled “Concrete Screen Block: The Power of Pattern.” The 120-page book, published in 2018, tells the history of a popular element of Mid-Century Modern architecture.

“It’s one of the most interesting but least appreciated of the Mid-Century building materials,” Ron Marshall said. “We cataloged 263 patterns of concrete screen block and we still come across new patterns after 10 years of research.”

The Marshalls, both retired government workers, admitted that concrete screen block is not necessarily the sexiest topic for a book, but they became interested in the material when they began wintering in Palm Springs from their native Baltimore and became active in historic preservation.

“You can’t be but so serious about concrete screen block,” Barbara Marshall said. “We try to keep our talks light and entertaining. Otherwise we’d put people to sleep!”

Ron Marshall said that California and Florida probably saw the greatest concentration of concrete screen block during the Mid-Century period. Gainesville was part of that trend.

“Yesterday we saw 18 patterns in just our first day in Gainesville,” he said. “We’re sure that just scratches the surface.”

Barbara Marshall added that the blocks are like little pieces of art and that many of the blocks can be put together to achieve different patterns.

“They also filter the sun and create interesting shadows,” she said. “The blocks give interest to some buildings that might otherwise be uninteresting. You see the patterns now in fashion jewelry and by elite designers such as Jonathan Adler and Trina Turk.”

Hylton offered a bit of news to those attending Thursday night’s reception at the Matheson Museum. He announced that, for the first time, Gainesville’s University Lutheran Church is moving forward with a landmark designation. It would become the first historic preservation landmark in Gainesville built after 1945.

The distinctive church, located at 1826 W. University Ave. (across from UF’s Ben Hill Griffin Stadium), was constructed in 1961 and designed by architect A. Wynn Howell.

The initial phase of the survey sponsored by Gainesville Modern helped identify some 20 buildings that showcase the Mid-Century Modern period and should be considered for future protection.

“This exhibition presents for the first time publicly the neighborhoods and buildings that should be landmarks,” Hylton said. 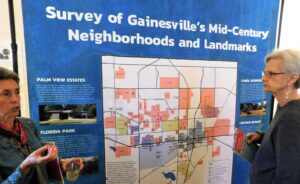