The Depression-era drama from acclaimed playwright Maria Fornés debuts Friday night at the Actors’ Warehouse. It’s not pretty, but you won’t be able to look away.

Cuban-born playwright María Irene Fornés has a knack for writing about flawed female characters and their personal and social struggles. Of the more than 40 plays Fornés has written since 1961, Mud stands out as a stark and uncompromising drama — and one of her finest works about the human condition.

Bond plays Mae, a hard-working young woman who labors over an ironing board to eke out a living. She lives in 1930s Appalachia poverty but is determined to become more than what has been handed in life. The only problem is that she must deal with two men who conspire to keep her down.

“Mae’s a scrapper — she’s had the short end of the stick her entire life,” Bond said. “She yearns for the good life, or what she perceives is the good life.”

“Henry is someone she can learn from,” Bond said. “She falls in love with him because of the possibilities of what he can teach her.”

However, Mae’s admiration toward Henry turns to impatience and resentment after an accident renders him helpless.

“I’m a character who offers hope, but that quickly fades,” Lishawa said. “This is a powerful piece. To me, it’s almost a portrait of bleak feminism.”

Meanwhile, Sorge plays Lloyd, an illiterate pig farmer with serious health issues and bouts of jealousy. He and Mae share a shanty — but they don’t necessarily shack up.

“Lloyd is a challenged individual in many ways,” Sorge said. “He’s poor and he’s sick, and he’s socially awkward. I think he’s probably the most aggressive of the three.”

When Lloyd becomes ill, Mae searches for a diagnosis. She brings their simple neighbor Henry home with her to help her read the difficult medical language. The ensuing love/hate triangle that brews between the three creates a toxic environment.

Sorge, who moved to Gainesville from New York City more a year ago to work for a local TV station, is making his acting debut. His previous stage experience was stand-up comedy while attending SUNY-Purchase.

Meanwhile, Bond and Lishawa are familiar faces to local theater audiences, but both are making their Actors’ Warehouse debuts. Bond recently directed No Exit at the Acrosstown Repertory Theatre while Lishawa has starred in many productions at the Acrosstown and more recently at the Hippodrome Theatre (Forever Plaid and Becky’s New Car).

“It’s been fun working with Lola and Adam,” Sorge said. “They’re showing me the ropes!”

Asse describes Mud as a play in which Mae shows a willingness to rise above her dire circumstances only to be brought down by her two male partners.

“It’s also about what extreme poverty does to people,” the director said.

Asse pitched the play to the Actors’ Warehouse last year, more than 30 years after meeting Fornés during a theater conference at Smith College in Massachusetts. He attended the conference with Mary Hausch, former producing director at the Hippodrome Theatre. She had hoped to produce Mud at the Hippodrome, but it never happened.

“It takes a special audience to appreciate this play because of the theme and language,” Asse said “All of her [Fornés’] plays are dark. She wants people to have a cathartic experience when they see the performance.”

Bond said that all three characters have their pluses and minuses.

“I think that all three of the characters are the hero and the antihero, and there are times when you feel sympathetic for all of them.”

And that is why the work of Fornés is so valued in modern theater. 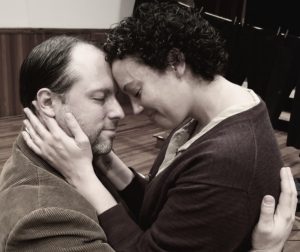 Performances: Thursdays, Fridays and Saturdays at 8 p.m., Sundays at 3 p.m. through March 31. (No performance on Easter Sunday.)
Tickets: $20 general admission; $15 students and seniors.

Please let us know what you think about Mud by posting a comment in the Leave a Reply section below.