A couple of years ago, Sloane Henry was teaching “The Art of War” to her World History class at Eastside High School. She wanted students to relate better to the famous work by military strategist Sun Tzu so she constructed a short story about teenagers and their relationships.

In turn, that teaching moment inspired Henry to write a play about modern adult relationships involving two young couples. She titled it All’s Fair and presented it last December as a stage reading during the Gainesville Homegrown Playwrights’ Showcase at the Acrosstown Repertory Theater.

The reading was so well received that the Acrosstown asked Henry to develop the play into a full-fledged stage production. She spent much of her winter break editing and rewriting the script.

“It’s been a big whirlwind,” Henry said. “I would keep tweaking it until the night it opens if they let me.”

Beginning this week, All’s Fair gets its turn in the spotlight at the Acrosstown. The play opens on Thursday night at 8 and continues through March 25.

In All’s Fair, young couple Skylar (Emma Grimm) and Axel (Ryan Wicks) confess that they are each in love with opposite-sex members of their closest friends — another young couple named Terra (Asia Zaffere) and Will (Aleksandr Wilde).

Bored with their own relationship, Skylar and Axel hatch an “Art of War”-style plan to break up the other couple to further their own romantic interests.

Jennifer Hutton, who directed the stage reading of All’s Fair during the Local Playwrights’ Showcase, said the play is about the games people often play in modern relationships.

“With the advent of technology, the millennial generation fundamentally approaches life differently than previous generations,” she said. “Pat Benatar told us love is a battlefield, but with the advent of apps and websites promising to present you with both infinite options and your one perfect match, there’s a level of strategy involved in finding love.

“This show illustrates how far we are willing to go to get what we want — even if what we think we want isn’t what we ultimately need.”

Henry shared the original script with Hutton about a year ago and the two have collaborated on All’s Fair ever since then.

“We spent some time workshopping it over the summer,” Hutton said. “When the ART local playwrights’ festival came, Sloane submitted it. We got a chance to workshop it further with some really talented people. The feedback from the actors and audience was invaluable.”

Henry said that Hutton has taken her script and run with it, figuring out the challenges of taking a brand-new play from page to stage.

“I never thought this play would get staged, so I never took into account some of the technical factors involved,” Henry said. “Jenn has novel and creative ideas for solving all the issues I didn’t foresee. She’s doing an amazing job. I trust her wholeheartedly.”

Henry, 27, is currently attending law school at UF, where she also earned her undergraduate and master’s degrees in education. She taught two years of public school in New Orleans and one year at EHS before entering law school.

“I really enjoy writing dialogue,” she said. “Listening to peoples’ conversations is something I find extremely interesting.”

Henry said that All’s Fair is loosely based on “The Art of War.” The narrator, known as the Commander (Wilfredo Gonzalez), uses quotes from “The Art of War” that are also interwoven into the script.

“The way Jenn has taken the script is really a critique of the way we view romance today,” Henry said. “Today, people are looking for perfection in a partner, always the next best thing, not realizing what you have right in front of you.”

Hutton said the driving force behind the play — like so many works of art — is the elusive search for love.

“All’s Fair comes with a few twists, though,” she said. “As in life, these characters have a distinct lack of perspective. They don’t take time to step back and consider their actions, and they discover that they can’t control everything that happens to them.”

“We’ve been very lucky to secure such a talented group — it took us a few weeks to find the right people,” she said. “This is really an ensemble show, so it was impossible to cast one role without also casting the others. It kind of happened all at once.”

Although the premise might sound like a setup for a television sit-com, Hutton said All’s Fair is definitely more of a drama. Audiences, she said, will appreciate Henry’s modern spin on romance.

“Rodgers and Hammerstein, Jean-Paul Sartre, Shakespeare, Chekhov and others were all masters of their craft, but it’s hard to completely identify with characters in plays written for a different era,” Hutton said. “All’s Fair, though inspired by an ancient text about warfare, is completely current, with four young, flawed characters looking for companionship but unable to see their own faults.”

And that, she said, is what makes All’s Fair so compelling.

“It’s interesting to see characters onstage who I can identify with so strongly because they think and talk like me and my friends.” 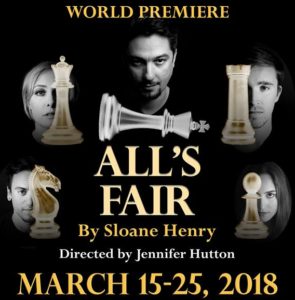