Gainesville’s “most non-denominational church” is taking a preemptive strike by conducting a Monday night exorcism of hate-monger Richard Spencer at Maude’s Side Car.

Richard Spencer, the noted white nationalist, is scheduled to speak on the UF campus on Thursday to spread his message of hate to as many local yokels as can slither into the UF Phillips Center for the Performing Arts.

But if the good folks at the Taberbacle of Hedonism get their way (again), the demons will be driven away from Gainesville with a good old-fashioned exorcism.

The goal, according to a press release from the Tabernacle, is “to remove the demon alien from [Spencer’s] body and to turn his stupidity and evil into love and redemption through the power of the goddess Jamba, the Great Dumpster Mother.”

The Tabernacle of Hedonism, Gainesville’s “most non-denominational Church,” will be conducting the exorcism on Monday night at 10:30 during its weekly “services” at Maude’s Side Car bar in the Sun Center East (next to the Hippodrome).

The Reverend Angeldust (Official Head of the Church) and Tom Miller (Reverend Deacon and Host) have requested that Fodder O’Brien (Resident Tabernacle Exorcist) be summoned to perform rites to cleanse the Alien Motherhood out of Richard Spencer’s heart, “for he has obviously been possessed by darkness and evil Nazi stupid-goop.”

Miller, a performance artist and Gainesville preservationist, said the exorcism is necessary for the sanctity of our fair city.

“We at the Tabernacle believe [Spencer] has been taken over by the Alien Motherhood (a sinister force operating in inter-dimensional space/time). We plan to hold an exorcism which has been blessed by the High Council of Space Mammals,” he said.

It should be noted that several years ago, Fodder O’Brien performed an exorcism of the alien-possessed pastor Terry Jones of Koran-burning fame. That exorcism was so powerful and successful that Jones closed up shop at the racist Dove Outreach Church and fled Gainesville to the Tampa Bay area. When last spotted, Jones was selling French fries at a mall food court in Bradenton.

Miller is confident that O’Brien’s ceremony will have the same effect on Spencer and his misguided followers.

“Often, his exorcist powers are so powerful that it’s very likely the speech will not even happen,” Miller said. “Either way, we hope to save Richard Spencer’s soul by casting him (figuratively speaking) into the Holy Dumpster to be cleansed of his ignorance and stupidity. There are not many who can remain so simple-minded and hateful when they’re gargling with a mouth full of Holy Jamba garbage juice.” 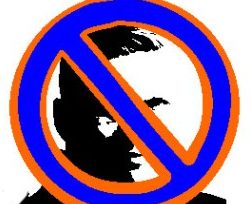 Tabernacle of Hedonism elders recommend this exorcism as an alternative to attending the Spencer Nazi Hate Rally on Thursday afternoon.

Spencer was not invited and no one at UF is sponsoring the event. The National Policy Institute is paying more than $10,000 to rent the Phillips Center and for security. The event will cost UF at least $500,000 for additional security.

If the Monday night exorcism is successful, however, the hate speech will likely be cancelled, “for Jamba the Great Dumpster Goddess is all powerful,” Miller said.

According to organizers, all sinners and non-sinners are welcome to attend the services regardless of religion, race, creed, color, sexual/gender orientation and socioeconomic status. The event is free, but the drinks — except perhaps for the holy water — certainly are not.