The intimate playhouse on North Main Street opens its 2016-17 season with a Sunday matinee of Beautiful Thing, a coming-of-age story set in 1990s’ London.

Traditionally, theaters open shows on Friday nights to get the most attention. The Actors’ Warehouse, however, likes to do things in an unconventional manner.

Beautiful Thing is the story of two teenage boys, one an introvert and the other an athlete, who live in the same East London housing project during the 1990s as the AIDS crisis is sweeping the globe. Over time, the boys become aware of their sexual attraction to each other.

“I believe this play is so important,” director Kathy Byrne said, “because, even though it is far easier to come out as a homosexual or gender-different individual in our current generation, there is still a lot of fear and misunderstanding on this topic.”

Beautiful Thing continues through Oct. 30 with performances on Thursdays, Fridays and Saturdays at 8 p.m. and Sundays at 3 p.m. Tickets are $15, $10 for students, seniors and groups of six or more.

The Actors’ Warehouse had planned to stage Mart Crowley’s The Boys in the Band as its opening play for the 2016-17 season. However, artistic director Steven H. Butler said he ran into some snags along the way.

“The play has nine male characters and we had some casting issues filling all those roles,” Butler said. “We tried. We even extended the audition period by a week and a half, but then we had to make an executive decision about five weeks ago.”

He said Beautiful Thing was a strong choice as a replacement.

“I saw the movie before I even knew there was a play,” he said. “When I read the script, I fell in love with it.”

Beautiful Thing follows classmates Jamie (Jonah Stokes) and Ste (Kevin Anderson) as they both deal with difficult personal lives. Jamie has a mother who goes through a series of boyfriends while Ste lives with his abusive father and older brother.

“Ste takes refuge at Jamie’s apartment,” Butler said. “Although they’re polar opposites, they form a friendship and come to realize they have an attraction toward each other.”

Butler said the budding romance between Jamie and Ste is about innocence and desire.

“One, knowing you’re different and, two, wanting to make a connection with like individuals,” he said. “That’s a very real situation with a lot of peoples’ lives when they realize they are different from their heterosexual counterparts.”

The play is a comedy but with serious moments. To stay true to the original story, the actors speak in Cockney accents and use British slang such as “bubble and squeak” (potatoes and cabbage), “lorry” (truck) and Butler’s favorite phrase, “Sort me out.”

“It means ‘Have sex with me,'” he said. “We were all laughing and joking about that!”

Byrne taught dialects and accents when she was on the faculty of Florida International University and New World School of the Arts. She also served as a diction and dialect coach on many productions when she lived in Dallas.

“This is the sixth full-length production where I have directed Jonah Stokes,” Byrne said. “He has a great ear and has been valuable in getting the Cockney accent down. The speech patterns are embedded in the script and important to communicating the culture of the characters.”

Byrne added that Beautiful Thing covers a lot of territory.

“This is a play about two young men discovering who they are and falling in love, but it is also about family brokenness — an alcoholic and abusive family, a single mother struggling to raise her child, a lost teen trying to find her way by acting out, and a middle-class young adult artist trying to fit into a working class community while he figures out who he is,” she said.

According to Butler, The Actors’ Warehouse is striving to stage more plays that deal with social justice and other important topics. In November, the theater will present Telling Gainesville: A Soldier’s Narrative of War in which five local veterans from different wars share their stories through writer Max Maynard.

Later this season, The Actors’ Warehouse will present Ethel Waters: His Eye is on the Sparrow, the drama Stick Fly, the musical Passing Strange and the Elizabeth Fuller comedy Me and Jezebel about Bette Davis coming for dinner and staying.

“Even though we’re a community theater, we want to have a venue where multicultural casting is in the forefront,” Butler said. “We’re also looking to open up the venue for other artists to come in and give their spin on social justice issues.”

To that end, The Actors’ Warehouse has created the AW Gallery featuring the works of local visual artists. The current exhibit includes the paintings of Alfred Phillips.

Meanwhile, Byrne said she is proud of the cast and crew for Beautiful Thing.

“I recruited Jonah Stokes and Paulina Oswald because I worked with them for five years while I taught theater at P.K. Yonge. They are both P.K. ‘lifers’ as well as my assistant director, Karina Kolb,” Byrne said.

Kolb holds a bachelors degree from UF and a masters degree from Harvard. Kevin Anderson and Jeremy Cutter are both graduates of Gainesville High School. Stokes, Cutter, Anderson and Kirkpatrick have all studied at Santa Fe College.

“The interesting part about this cast melding is, that once all of the parts were cast, we realized many of them had crossed paths previously in some way,” Byrne said. “So, even though they didn’t know each other that well, they had a lot in common and there was a lot of trust from the beginning that continued to grow.” 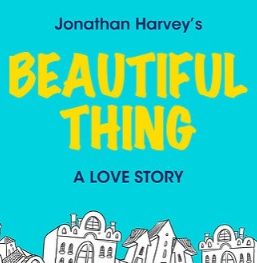