Are you sure about building that wall? In the past two weeks, a pair of family-owned eateries have expanded downtown Gainesville’s dining options well beyond our borders.

Unbeknownst to each other, two determined couples spent the long, hot summer putting love, sweat and tears into a pair of dining establishments that are now helping to give downtown Gainesville more of an international flair.

Alpin, a French bistro owned by Romain and Sita Marlier Challandes, opened earlier this month at 15 SW 2nd St., in a space formerly occupied by the Motor Room lounge.

Tamal, a storefront tamale shop owned by Nicholas and Rachel Iannelli, is now open for business four days a week at 439 Main St., in the complex that also includes the Civic Media Center and Wild Iris Books.

“This is Mom and Pop comfort food — nothing fancy,” Rachel Iannelli said about her 15-seat eatery that opens at noon Thursday through Sunday and closes each day whenever the last tamale is sold.

During the first two weeks of operation, Tamal has sold out of that day’s supplies of handmade tamales by 5 p.m.

“We’ve been doing about 100 tamales a day, but we’re amping it up for Fest this weekend and extending our hours and service,” she said. “I would like to be open into the evening, but we’ll need to double or triple our output to meet demand.”

Alpin also can expect a spike in business from Fest, the massive three-day punk-rock festival that takes over downtown Gainesville this weekend. Alpin is conveniently located within a block or two of seven venues used for Fest.

Those who stop in at Alpin can choose from a wide selection of imported and domestic beers and wines as well as French-style Le Croquet-Monsieur (grilled ham and cheese) and Le Ramequin Suisse (quiche) in a cozy atmosphere that might conjure up images of the 6th Arrondissement of Paris.

“A lot of people who walk in will say something like ‘I feel like we’ve traveled across the waters!'” Sita Challandes said.

Her husband, Romain, took almost seven months to build the restaurant from the floor up. He built the L-shaped eating counter, most of the tables and even the walls. He also constructed the planters in the outdoor patio area.

“It’s incredibly personal — it’s our space and it’s our home,” Sita said. “It’s like when you’re having a baby where it would take nine months to realize your life will change forever.”

The Iannellis took about the same amount of time to finally open Tamal in the space that formerly housed the Display Gallery art and performance venue in the South Main Street (SOMA) Arts District. Nicholas, a carpenter and craftsman by trade, built almost everything himself.

Previously, the family sold tamales out of a food cart at local festivals but decided it was time for Gainesville to have its first dine-in/take-out restaurant specializing in tamales. The traditional Mesoamerican dish is made from a starchy dough (masa) delicately steamed in a corn husk.

Tamal offers customers a choice of beef, chicken and vegeterian tamales as well as side dishes such as pinto beans, collard greens, pickled peppers, chicken soup and a side salad. The Iannellis also offer signature nonalcoholic beverages — horchata, tamarindo and jamaica — all made from scratch.

“We make all of our own pickles, including carrot-serrano,” Rachel added. “Everything is made from scratch down to our chili powder.”

So far, she said, the community response has been excellent.

“I think it’s because we have an honest, simple menu but with complex flavors,” she said.

While the Iannellis are spicing up one end of downtown, the Challandes are giving patrons a taste of Europe a short stroll from West University Avenue. Romain and Sita, both 38, are from Geneva, Switzerland, although Sita was born in Florida. They are raising three children, including 3-year-old twins and a teenage daughter.

When fully operational, the Alpin menu will feature Croquet-Madame (ham, cheese and poached egg), a wider selection of quiches (Lorraine, Foret and Bergere), charcuterie platters, crepes, salads, homemade desserts and other small dishes made with a French flair. The small plates, all made from scratch from family recipes, are designed to be enjoyed with wine, beer and champagne. 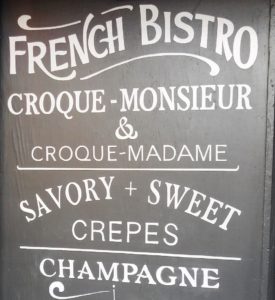 “You don’t want to be in a hurry when you come in here,” Romain Challandes said, adding that nothing the restaurant cooks is frozen or microwaved.

Alpin’s color scheme is black, white and beige. Photographs taken by Sita in Switzerland grace the walls, along with paintings and posters that add to the eatery’s Old World charm. The restaurant takes its name from the European mountain range. Toward the back of Alpin is a canvas painting of a mountain created by Romain from cleaning his brushes during the construction process.

“The reason we’re doing this is we have three children, we love to socialize, we love good food, good drinks, music and the arts,” Sita Challandes said. “Perfect!”

Less than a mile away, longtime Gainesville residents Rachel and Nicholas Iannelli are equally proud of their new tamale shop. Their 17-year-old son, Cecil, is in the Culinary Arts program at Eastside High School and plays an important role in the success of Tamal.

“This has been really gratifying,” Rachel said. “People have been sort of been coming out of the woodwork and telling us, ‘We’ve been out west and have been waiting for this sorta thing.'”