The self-taught folk artist will have his latest work on display during the Santa Fe Spring Arts Festival this weekend in downtown Gainesville. One painting has a little-known historical connection to author Marjorie Kinnan Rawlings.

Ernest Lee is a soft-spoken man who tells stories not with words but with brushstrokes on canvas. In that sense, he is the quintessential folk artist.

Anyone who has visited Ward’s Supermarket in Gainesville recently knows a little something about the store’s history thanks to Lee. His 8-foot-by-4-foot mural to the right of the entrance depicts founder Bill Ward and the original produce stand that started it all.

This weekend, Lee and more than 200 other artists will exhibit their work for all of Gainesville to see and admire during the Santa Fe Spring Arts Festival. Although Lee has participated in the show for several years, this will be his first time in the juried section.

“I’ll be competing against the top artists coming into town,” Lee said with a hint of pride.

Although each of Lee’s paintings tells a story—whether a dog guarding a ramshackle house or a fire sweeping through ill-fated Rosewood—his latest work has a story that is rich in Alachua County folklore.

The painting of the old Island Grove filling station pays tribute to the late author Marjorie Kinnan Rawlings and the story behind how she learned about winning the 1939 Pulitzer Prize in fiction for her novel “The Yearling.”

Commissioned by retired educator Diane Adams, Lee’s oil-on-canvas painting shows the front of the gas station as it would have looked in the early 1950s, complete with signage for soft drinks and two pickup trucks from the era. In the foreground, an older woman in a floral-print dress and an apron is surrounded by three children.

“I’d seen some paintings Ernest had done for a friend of mine [Carlene Harmon], and I had a story about my grandma I wanted him to tell,” Adams said.

In fact, the woman in the painting is Adams’ grandmother, Arnie Abstein. She ran the gas station in Island Grove, south of Hawthorne, for a number of years. Island Grove was the closest community to Cross Creek, where Rawlings lived the secluded life of a writer.

Everything was quiet until that day in 1939 when the phone rang in Arnie Abstein’s little store.

“Someone called the gas station to say Marjorie Kinnan Rawlings had won some kind of prize,” Lee said.

The only problem was that the writer lived five miles away and didn’t have a phone.

“They wanted Grandma Arnie to get word to Marjorie Kinnan Rawlings,” Adams said. “Well, Grandma took that call and sent her husband into the woods.”

Later that day, Rawlings learned the news that would change her life forever and put tiny Cross Creek on the world literary map.

The Island Grove gas station where Rawlings learned the news has long been replaced. Lee had to rely on old black-and-white photographs to bring the place back to life.

Earlier this week, Lee invited gainesvilledowntown.com into his northwest Gainesville studio for a look at the unfinished painting.

I made Grandma Arnie … larger than life because she was.
— Ernest Lee

“I’ve been taking my time to make sure that everything’s the same as it would’ve been in 1950,” he said, pointing out the old gas pumps, a newspaper rack and the vehicles.

“I made Grandma Arnie the focal point and built everything around her. I made her larger than life because she was.”

Arnie Abstein is holding a pie and is the center of attention of her three grandchildren. The girl happens to be a young Diane Gardiner Adams. The boys are her older brother Gary and younger brother Mike.

“I remember that little store very well,” said Adams, who taught 38 years at Glen Springs Elementary School. “She always had the small bottles of Coca-Cola in the fridge that she let us have.”

For that reason, and the fact that her mother collected Coke memorabilia, Adams requested that Lee include a reference to the soft drink in the painting of the store. She also wanted some mention of Ford because her father had worked for the Ford Motor Co.

Also, Adams asked Lee to include a sign stating “No Public Phone” be painted on the front of the store to honor the Marjorie Kinnan Rawlings story. Lee went one step further by including the initials MKR in a special spot in the painting.

Rawlings left her mark on the gas station. The story goes that once, when she had had too much to drink, she hit one of the gas pumps with her car.

Adams said that Rawlings attended her parents’ wedding at the First Baptist Church of Island Grove. The writer’s wedding gift was an embroidered dish towel.

According to Adams, Arnie Abstein grew up in Island Grove and lived there as an adult until her house burned down. Then she moved to Shiloh.

“We had Sunday dinner at her house every week,” said Adams, who would sneak into her grandmother’s pantry to eat sugar crystals that had formed in the honey jar.

Grandma Arnie also ran a boardinghouse when celery pickers came to town and cooked “magnificent” meals for the workers. In her 60s, Abstein got a job as a nutritionist at Lowell State Prison. She worked there 12 years, planning the menus and teaching inmates how to cook.

“We used to tell people we were going to see Grandma in prison,” Adams said with a laugh. “Everybody loved Grandma Arnie.”

And Grandma Arnie had a lot of love to give. After Rawlings died in 1953, she placed a rose on her grave once a year at the Antioch Cemetery near Island Grove. When Grandma Arnie died more than 40 years later, at age 96, she was buried in the same cemetery.

“My momma used to say the road to the cemetery is so bumpy, you better hold onto your false teeth!” Adams said.

It’s no surprise that Adams sought Lee out to do the painting to honor her beloved grandmother. He accepted the task and immediately did his homework.

“He got to know my grandmother better than we did,” Adams said. “Ernest was part of the family by the time he got the painting going.”

That wholesomeness carries over to his paintings, most of which reflect a simpler time. For many, Lee’s images of old buildings, natural Florida landscapes, trains and glorious sunsets evoke pleasant memories.

“People look at my work and they say it looks like storytelling,” Lee said. “I try to give them a little peace and happiness in my artwork.”

Lee’s folk art is appreciated throughout the South and even on the other side of the globe.

A leading pathologist in western Japan owns two original paintings by Lee. One of the paintings shows an Alachua County waterway scene because the doctor specifically requested an image that represented northern Florida’s natural beauty.

“People collect my stuff and say that it’s valuable,” Lee said. “I don’t get a big head about things. I’m just a regular guy who tries to produce good work.”

Lee, 53, has been honored for his work not only at art shows in places such as Cedar Key and Longwood, near Orlando, but also by organizations who recognize his contributions to preserving Florida’s cultural heritage.

In 2013, during a ceremony at the Matheson Museum, the Stetson Kennedy Foundation presented Lee with its coveted Fellow Man & Mother Earth Award for thoughtfully depicting the African-American experience during the mid-20th century.

Kennedy, a folklorist, author and human rights activist from Jacksonville, is best known for infiltrating the Ku Klux Klan in the 1940s and exposing the group’s secrets. The white robe he wore is in the possession of the Smithsonian.

“Mr. Lee’s paintings keep alive the spirit of African American life that people otherwise wouldn’t know about,” said Parks, who proudly displays a painting by Lee in the entryway of her St. Augustine home.

A painting by one of the famed Florida Highwaymen that once hung in that foyer “went down the hall,” she added.

Before his death in 2011 at age 94, Kennedy suggested to Lee that he paint an image from the 1923 racially motivated attack on blacks in the small community of Rosewood. Eight people, including six African Americans, died in the violence.

Lee’s stark painting, “Massacre at Rosewood,” depicts a cabin ablaze. In the foreground, three members of a black family watch the flames alongside a rifle-toting white man. In the smoke stand two eerie figures in white robes and pointed hoods.

“I didn’t paint it to upset anyone, I painted it because it’s historic,” Lee said. “When it comes to certain things, I look for what is right and what is the truth in a situation.”

Lee began painting in earnest only a decade ago after 20 years of making a modest living as a lighting electrician.

Lee was born near Raleigh, N.C., but soon moved to Virginia with his family. At age 3, he was struck by a car and moved back to North Carolina to live permanently with his grandmother. The impact with the chrome bumper tore off the hair on the front of Lee’s scalp. As a result, he suffered seizures and severe migraine headaches throughout his youth.

The grandmother, Alice High Daniels, also raised four children of her own but spent precious time with young Ernest.

Lee’s earliest drawings were of comic-book superheroes, but he took an art class in high school that changed his perspective. At 15, his earliest painting of a person, titled “Daddy’s Little Girl,” got the attention of his high school art teacher, Mr. Cherry.

The painting, which Lee still owns, shows a young black girl sitting on a porch chair clutching a tattered, blonde-haired doll. Mr. Cherry encouraged Ernest to pursue an art career rather than enter the military. 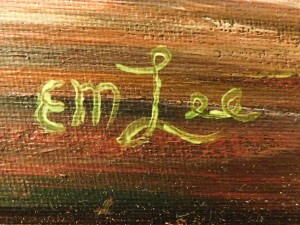 In 1980, Lee enrolled as an art major at St. Augustine’s College (now University) in Raleigh, N.C. He studied under Dr. Howard Burchette, head of the art department, who became his mentor.

“I learned about art itself for two years but not about painting techniques,” Lee said.

After his sophomore year, the grant program expired. Lee left school and found work with an electrical firm specializing in lighting. He became a crew leader and later started his own company, taking on large projects all along the Atlantic coast and throughout the Midwest.

“The lighting job took over my life,” Lee said. “I pretty much put art on the backburner during my 20s and 30s.”

Then, around 2000, Lee moved to Florida and began focusing on his artwork after being introduced to S.M. Wells, an original Highwayman. Lee “got into a groove” and sold some of his paintings to boutique galleries.

However, his big break occurred in 2005 during Gainesville’s Fifth Avenue Arts Festival.

Scott Free of the Gainesville-based funk/rock/soul band Munkees Strikin Matchiz saw Lee’s work for the first time and a friendship developed. Free later commissioned Lee to create futuristic art for his band’s new “BananAtomic Mass” CD cover. Appearing on the album were, among others, Bo Diddley and George Clinton.

“The artwork was an exploding Earth with aliens,” Lee said. “It was pretty abstract.”

It was exactly the galactic image Free had desired.

“We found the artist [Lee] who is the expression of our music,” he said. “It couldn’t have happened with anyone else. It’s an honor to work with a dude like Ernest.”

Since then, Lee has devoted all of his time to painting and attending art shows on weekends with his wife, Gloria. The couple got married in early 2015.

“I feel privileged that I’m going to have one of his original paintings,” she said. “He has a gift for listening, storytelling and his artwork on top of all that.”

For more info about the artists, visit the Ernest Lee website.

To comment on this article or about Ernest Lee, please Leave a Reply below.