“Liquid Gold: The Rise and Fall of Florida Citrus” provides a retrospective of the industry that dates back to Ponce de Leon. Some of that history isn’t so sweet.

Everyone has heard about the gold rush that led to the rapid growth of California in the years before the Civil War. What many people might not know is that after the Civil War, Florida’s sudden growth was spurred in no small way by what one historian calls the “orange rush.” 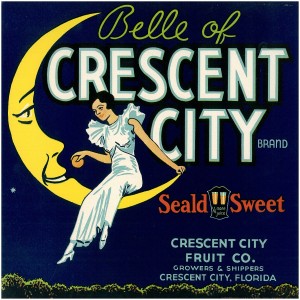 That’s orange as in citrus.

“All these land companies started opening up so that people could start their own citrus groves,” said Rebecca Fitzsimmons, curator and archivist of the Matheson History Museum. “Citrus played into the land boom that played into Florida’s growth and development.”

The history of the agricultural crop is the focus of the Matheson Museum’s newest original exhibit, “Liquid Gold: The Rise and Fall of Florida Citrus,” that opened Monday and continues through Aug. 26. The museum is located at 513 E. University Ave. and is open weekdays from 9:30 a.m.-4:30 p.m. Admission is free.

“Citrus is one of the main themes of Florida history and culture,” said Peggy Macdonald, director of the Matheson Museum. “The industry was fueled by the growth of railroads after the Civil War.”

Macdonald said that in the late 1800s, citrus was routinely shipped via steam-powered boats across Alachua Lake at Paynes Prairie. One historic photograph in the exhibit shows an orange boat on the Ocklawaha River east of Ocala.

According to historian Gary Mormino, groves in Melrose, Gainesville and Hawthorne yielded more than 817,000 boxes of oranges during the 1889-90 season. That was the most in the state at the time.

The first citrus tree on Florida soil was planted by explorer Ponce de Leon 500 years ago in the area of St. Augustine. Although oranges were not native to the New World, the crop survived and, a few hundred years later, became the pillar of Florida agriculture and a symbol of the state’s tourism industry.

Children in colder climates delighted on Christmas morning to find oranges in their stockings, a gift of sunshine from jolly old St. Nick.

“This one fruit symbolized subtropical paradise and Eden,” Macdonald said. “It was a holiday tradition.” 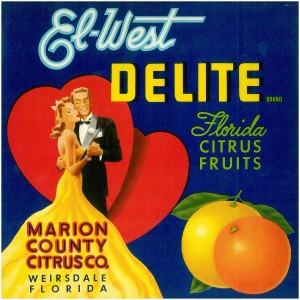 The Matheson Museum exhibit shows the romantic side of the citrus industry through historic photographs, postcards and colorful labels from citrus crates that doubled as advertising for groves. In fact, the 11 labels on display are from Fitzsimmons’ personal collection.

As Fitzsimmons delved into her research, however, she discovered the seedier side of things.

“I didn’t realize some of the darker elements of the citrus industry,” she said. “Looking back, though, every typical agricultural industry seemed to have its abuses.”

One such abuse after the Civil War was peonage, also known as debt servitude.

“Peonage arose when slavery ended in a serious way,” Fitzsimmons said. “But it was slavery, just in a different way.”

Many early citrus workers—considered peons—lived in company housing and bought goods from company stores, but they never made enough money to pay off what they owed.

“They could never leave because they could never work off their debt,” Fitzsimmons said. “It was predominantly African Americans but included white people, too.”

Another area of the “Liquid Gold” exhibit addresses the case of the Groveland Four, referring to four black men accused of raping a white woman in Lake County in 1949. The citrus industry was the backdrop for the events that unfolded over a two-year period centering on Sheriff Willis V. McCall, a well-known white supremacist.

“He had a reputation for arresting union organizers to make sure there were enough African Americans to work in the groves,” Fitzsimmons said.

One of the accused men was killed by a sheriff’s posse before he could be arrested. The three other men were convicted of rape. Two of them appealed. While McCall was transporting Sammy Shepherd and Walter Irvin from prison back to Lake County for a retrial, the sheriff shot both men when he said they tried to escape. Shepherd died.

One photograph from Irvin’s 1952 retrial in Ocala shows him being defended by NAACP attorney Thurgood Marshall, who would later be appointed to the U.S. Supreme Court.

The Matheson exhibit also displays stereographs from the 1870s showing the first citrus grafting that, according to Fitzsimmons, “brought continuity to the product.” Other photographs taken by the Farm Security Administration show citrus packing plants in the 1930s.

“Liquid Gold: The Rise and Fall of Florida Citrus” draws attention to the great freezes of 1894-95 that almost wiped out the citrus industry as well as the citrus “greening” that is decimating citrus crops today. 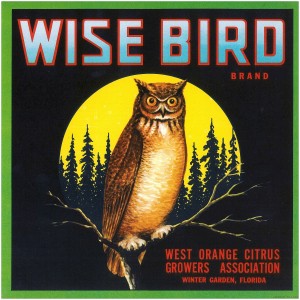 In conjunction with the exhibit, the Matheson Museum will host a special program on Thursday night titled “Dream Fruit for a Dream State, or When Alachua County Was a Citrus Power.” Gary Mormino, an author and history professor at the University of South Florida-St. Petersburg, will explore Alachua County’s and Florida’s long relationship with citrus.

The event begins at 6 p.m. and is free to the public.

On Sunday, April 17, Macdonald and Fitzsimmons will conduct tours of the exhibit from 1-5 p.m.