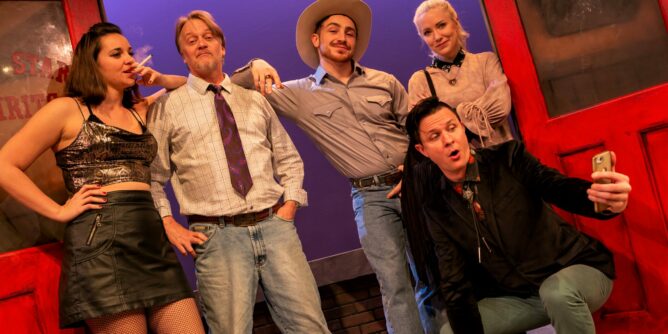 In the Hippodrome Theatre’s newest production, a young woman returns to her roots only to discover that some things never change.

Deep in the heart of Texas, there’s a town dying to keep its memories alive.

Walter, proprietor of the local liquor store, is struggling to keep his business afloat so as not to upset the ever-present ghost of the town’s pioneer founder.

Meanwhile, there’s dull-witted Drew. He’s a hometown boy dead-set on raising money to build a monument to immortalize his title-winning touchdown catch from when the place still had a high school.

Only when Walter’s estranged daughter appears out of nowhere are both men reminded that there are two sides to history — and one isn’t very glorious.

Lone Star Spirits, the newest mainstage production at the Hippodrome Theatre, takes a humorous but also poignant approach to the ghosts — real and imagined — that inhabit our lives.

Opening Night is Friday at 8. There are also shows Saturday at 2 p.m. and 8 p.m. and Sunday at 2 p.m. followed by seven performances a week through Feb. 16. Pay-what-you-can ($5 minimum) preview performances take place on Wednesday and Thursday at 7 p.m.

Marissa Toogood returns to the Hippodrome to play Marley, the young woman who sets everything in motion in Lone Star Spirits by returning to her hometown along with her city-slicker fiancé, Ben (Niall McGinty).

“It’s about coming to terms with the places that made you who you are — and sometimes we don’t necessarily like that,” Toogood said about Lone Star Spirits. “It’s that confrontation of ‘Who was I then versus who am I now?’ and where does that lead.”

Some of the play’s best lines are delivered by a local woman named Jess (Brooke Tyler Benson). She’s a single mother and rightfully jaded after losing her husband in Afghanistan a few years earlier.

“Of course I’m not happy,” Jess proclaims at one point. “Happy is for children and hippies!”

Even though Lone Star Spirits is a comedy, Tobiessen has written a play in which every character seems relatable on some level.

“They’re so beautifully written, but they’re so imperfect in such wonderful ways,” Toogood said. “And even though it’s so funny, it’s got a really, really good heart to it.”

Toogood last performed at the Hippodrome in 2018, playing an ageless vampire in Let the Right One In. She now lives in Atlanta with husband Logan Wolfe, who’s also acted in numerous Hipp shows.

Mercer, who performed as pianist Alfred Da Cappo in the Hipp’s recent Scrooge in Rouge, plays the curmudgeonly Walter. His character ignores his growing health issues, referring to doctors as “pharmaceutical whores.”

Walter’s a proud man. He keeps the liquor store open in tribute to Henry Whitman, the unseen sixth character in Lone Star Spirits. As legend goes, old Henry brawled with a 500-pound bear in the 1890s with predictable results. His ghost continues to rattle things.

“I think it’s an interesting play about success,” Mercer said. “Are you a success as a lover, a parent or a child or a friend? And just because you’re in a small town, it doesn’t reduce any of that.”

Mann, a New York-based actor, is making his Hippodrome debut as ex-jock Drew, who’s not exactly the brightest bulb in the tool shed.

Playing a hometown boy from West Texas is not much of a stretch for Mann, who grew up in Arkansas, attended college at Oklahoma University and once lived in Dallas.

“We all got cast for a certain reason and that’s because there’s something of this character that lives within us,” he said. “So much of our rehearsal has been me going, ‘Hey, y’all. My mama used to say …’

“This play has brought up so many memories of my past that maybe I forgot about or did when I went to college and was trying to be a ‘theater artist.'”

The Hippodrome production is part of a unique collaboration with freeFall Theatre in St. Petersburg. That theater is currently producing the two-person musical Marie and Rosetta. In late February, the theaters will swap productions. Marie and Rosetta will run at the Hipp from Feb. 28-March 22.

Then she added: “It really allows us to grow artistically, and it’s also a way for us to stay fiscally responsible in these much tighter economic times, so we can still provide Gainesville with high-quality, professional theater.”

* Please let us know what you think of Lone Star Spirits by providing a comment below.