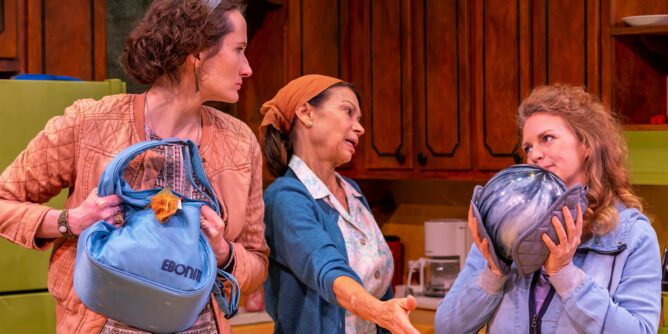 Shuffle off to Buffalo for some belly laughs in “Miracle on South Division Street,” the heartwarming comedy opening this week at the Hippodrome Theatre.

Sometimes, secrets need to stay, well, secret. But Ruth Nowak knows something about her family’s history she just can’t help blabbing to her brother, sister and — worst of all — her mother.

And maybe it’s just as well. That’s because that jaw-dropping secret someone had uttered to Ruth before passing away creates a maelstrom of a family crisis that sets the hilarious tone for Miracle on South Division Street, opening this week on the mainstage at the Hippodrome Theatre.

The laugh-out-loud comedy from Tom Dudzick (Over the Tavern) will have seven performances a week through March 24. There are preview performances tonight and Thursday night at 7. Admission for those two shows is pay-what-you-can.

V Craig Heidenreich, fresh off performing as Torvald Helmer in A Doll’s House, Part 2, is directing Miracle on South Division Street. He said he was not familiar with Dudzick’s play until he was asked to direct it.

“I have a number of friends who actually did the show elsewhere several years back,” Heidenreich said. “And when they found out I was doing it, they all wrote and said ‘Oh, my gosh. You guys are so lucky! This is the most fun we ever had doing a play.'”

It’s no wonder Heidenreich calls Miracle on South Division Street “Roseanne meets Everybody Loves Raymond in Buffalo.” The play looks and feels like a TV sitcom, but without the commercials.

The play centers around the Nowaks, a Polish-American family embedded in a working-class neighborhood of Buffalo. Clara Nowak, the acerbic family matriarch, is hellbent on keeping her three adult children from straying from their Catholic faith. After all, their reputation is at stake.

“We got to get things back on track or the miracle is gonna die on us,” Clara laments to daughters Ruth and Beverly and son Jimmy. “We got to keep this alive.”

What Clara means is that it’s her family’s duty to preserve and promote the 20-foot-tall statue of the Blessed Mother her father built in 1944 outside his neighborhood barbershop. The story goes that Grandpa, fresh from Poland with his new bride, saw an apparition of the Virgin Mary and went gangbusters to honor her with the statue.

The entire play takes place in the Nowaks’ homey kitchen, meticulously designed by Tim Dygert and well appointed by props person Patrick Ian McCall. The fun is in the details, from refrigerator magnets and a Tiffany-style light fixture to avocado-colored appliances and a copy of the red-checkered “Better Homes and Gardens New Cook Book” above the stove. Also impressive is that Hippodrome employees were recruited to hand-paint each and every pastel-colored floor “tile.”

Not to be overlooked is the small crucifix on the wall that announces the family’s faith.

Nell Page returns to the Hippodrome mainstage as Clara, whose life revolves around the statue. She even opened a soup kitchen on the site of the old barbershop that she calls “holy ground.”

Page, who most recently performed in Ripcord at the Hipp, said that Miracle on South Division Street is all about the laughs.

“We’re fortunate that the script is funny,” she said following a dress rehearsal before an invited audience last week. “As a matter of fact, there were a couple of times when I thought, ‘Man, I feel kind of guilty because I’m getting a laugh and I know I’m not doing it exactly right.'”

However, Heidenreich said pulling off comedy is not as easy as it might sound.

“Comedy is hard, it’s very hard,” he said. “The essence of comedy is truth, just like the essence of drama is truth. It’s either the recognition of yourself or others in the characters in the story or the irony of surprise when it’s not what you would normally recognize. That’s the essence of it.”

Shatkus agreed, adding that comedy might require an even deeper truth than a tragedy would.

“[Comedy is ] really just tragedy with a mask on,” she said. “It’s not the hardest part, but the challenge of comedy is finding the real truth of it for the storytelling and for your character. The need and the want and the objective is all just as great as it is in Hamlet or something. The farther you can go with the truth, the more the comedy works.”

Miracle on South Division Street is a reunion for Heidenreich and three of his cast members. He made his Hippodrome directing debut last year with Ripcord, a comedy in which Page played the resident of a retirement home, Shatkus played her daughter and McGinty her son-in-law.

Schram is making her Hippodrome debut. The Brooklyn-based actor met Heidenreich through their work with the Florida Repertory Theatre in Fort Myers.

As Ruth in Miracle on South Division Street, Schram’s character is at odds with her mother on a number of topics, not the least of which is being caught skipping Mass.

“I think, in a way, I relate to this family,” Schram said. “I have different values than my dad, especially now, and it’s a struggle to have that conversation, to have that conflict and try to bridge that gap. It’s a cycle, the next generation and parents having that conflict.”

Page said she thinks audience members will relate to one or all of the characters in Miracle on South Division Street.

“It’s not just funny for the sake of being funny, it’s funny because we relate to it, we as actors, we as the audience,” Page said. “That’s what makes it funny. We’re laughing at situations that we’ve known, so it really crosses that line. It’s a great show. It’s got just enough sweetness and got just enough bite.” 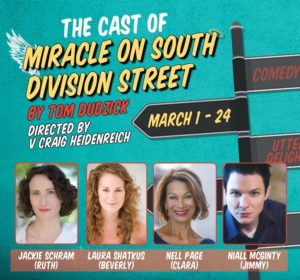