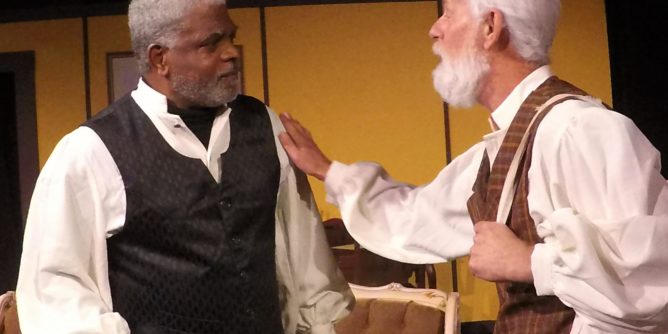 Frederick Douglass was an eloquent orator and staunch activist who believed in the power of persuasive words to achieve results. John Brown was, for the most part, a man of action — even if somewhat misguided.

Douglass and Brown, perhaps history’s best-known abolitionists, saw eye-to-eye on most anti-slavery issues. But one thing they couldn’t agree on was Brown’s plans to raid the federal arsenal at Harpers Ferry in 1859.

Their final conversation in the months leading up to Brown’s ill-fated raid is at the forefront of In Splendid Error, a historical drama opening this weekend at the Acrosstown Repertory Theatre, 619 S. Main St. Opening night is Friday at 8. There are also performances Saturday at 8 p.m. and Sunday at 2 p.m. followed by three performances a week through Feb. 17.

“I think this is an excellent piece to take you back in time to a pivotal point in American history,” said Carol Velasques Richardson, the director of In Splendid Error. “The issue between Frederick and John is over the right versus wrong method of freeing the slaves.”

By informing his friend about the pending raid, Brown creates a moral dilemma for Douglass, a former slave who became one of the most influential leaders of the anti-slavery movement. Douglass ultimately chose not to join Brown’s insurrection — and may have unknowingly preserved his legacy.

“I believe that if Frederick Douglass had assisted John Brown in that raid, we wouldn’t be talking about him today,” Velasques Richardson said.

“I think audiences are going to love them,” Velasques Richardson said. “They have mutual respect for one another as friends and as artists. I think they’re electrifying.”

E. Stanley Richardson said there are unique challenges in portraying a major historical figure from the 1800s.

“It’s scary [playing Douglass],” he said. “I have nothing to go on except some of his writings. There’s no audio or video of him, or mannerisms — just photographs.”

Douglass was born into slavery. His mother died when he was young. He didn’t know his father but suspected he was a slave master.

After escaping slavery at age 20, Douglass became a respected statesman. He also published The North Star, an abolitionist newspaper in Rochester, New York.

“His ability to write and speak brought him to prominence,” Richardson said. “People were astonished by his intelligence.”

In Splendid Error is set in the Douglass home in Rochester, where we meet his family and some of his abolitionist friends. Then John Brown shows up unexpectedly using an alias. Douglass welcomes his old friend and expresses support for Brown’s goals but not his violent methods of achieving them.

“John Brown was a great man,” McShane said. “In religious terms, he is a martyr, a saint and a prophet. He is certainly an American hero and an African American hero.”

McShane noted that the late comedian Dick Gregory rated Brown as his No. 1 hero because “A white man that’s willing to kill or be killed … to liberate me!”

“Because John Brown is a real-life hero, I feel like I have to do him justice,” McShane said. “I have to get him right.”

McShane has played historical figures in other stage productions, most notably Julius Caesar and Sigmund Freud, but John Brown’s story has been muddled by history.

“The first take I had of John Brown as a student in the 1960s, he was pictured as a crazy man who was hanged for treason after seizing a federal arsenal,” he said. “The true measure of what John Brown was all about was made by African Americans from the very beginning. He declared eternal war against slavery and was willing to lay down his life in this cause.”

Playwright William B. Branch wrote In Splendid Error in 1954. The thought-provoking play is an intimate portrait of two men at the crossroads of history. The little-known play delves into the small decisions that sometimes change the world.

“It’s tragic that Frederick Douglass never seems to forgive himself for not going with John Brown to Harpers Ferry,” McShane said.

Velasques Richardson said that In Splendid Error is not just a play for Black History Month.

“We definitely honor Black History Month, but I also believe this play could be performed anytime because it’s history,” she said. “We’re still talking about these same issues today. It’s just shaped and molded differently.”