Thornton Wilder’s Pulitzer Prize-winning allegory about the history of mankind told through the story of one family arrives at the Acrosstown Repertory Theatre this week.

You might as well call Meagan Reagle the Acrosstown Repertory Theatre’s expert when it comes to the absurd.

A year ago, she played Lucky in Samuel Beckett’s mind-bending Waiting for Godot. This season, she’s directing Thornton Wilder’s The Skin of Our Teeth, which opens tonight at 8 at the theater, located at 619 S. Main St. (in the Baird Complex).

“My niche would probably be absurdism,” Reagle said before a recent rehearsal of the play. “My favorite playwrights are David Ives, Chekhov, Wilder and Beckett. They’re all on my bookcase at home.”

With The Skin of Our Teeth, Reagle has her hands full, overseeing a cast of 11 in a three-act play that spans more than 2.5 hours and includes a new ice age, a great flood and devastating wars — not to mention two dinosaurs less scary than Barney.

“I love this show,” Reagle said. “I studied it in college. It’s an actor’s dream to do this. Wilder gives you a lot to play with.”

The story centers around the Antrobus family from suburban New Jersey. While living a seemingly normal life early in the 20th century, the family somehow weathers all of the aforementioned catastrophic events.

Throughout the play, the characters and their experiences are connected to stories from the Bible, classical mythology and world history to highlight how this one family is standing in for all of mankind.

It is totally absurdism. … The audience can expect the unexpected.”
— director Meagan Reagle

Meanwhile, the play includes a ongoing Bingo game in which audience members can win theater tickets! There might even be a character from the play serve sandwiches to the audience.

“It’s very 1930s-40s slapstick,” Reagle said. “Thornton Wilder is sort of the Chekhov in the day. It is totally absurdism. No one knew what to label this at the time. The audience can expect the unexpected.”

When writing The Skin of Our Teeth, Wilder called it “the most ambitious project I have ever approached.” His work was rewarded with the 1943 Pulitzer Prize for Drama.

“It’s hard to describe,” said Chuck Lipsig, who plays George Antrobus, whose accomplishments include inventing the alphabet and the wheel in the first act. “The family is sort of representing everyone through time. Wilder was aware that he was going to have to explain what he was doing.”

“It’s downright confusing at times,” Reagle added. “But if you know that going into it, you can sit back and relax and see where the script takes you.”

Reagle, with the help of Michael Presley Bobbitt, has also created an imaginative set that draws the audience into the play with a floor painted with black-and-white converging lines.

A bookcase includes a selection of literary classics. An old Sears-Roebuck catalog sits on a nearby table. They raided the Acrosstown prop room and thrift shops for furs, stuffed animals and a curtain comprised of found kitchen objects, such as metal whisks, spatulas, graters, teacups and beer steins.

Carolyne Salt, the Acrosstown’s president, said The Skin of Our Teeth, to her knowledge, is the first time the theater has staged a Wilder play.

“It seemed like a good fit for the theater in terms of subject matter and tone,” Salt said. “There are parts of it that are certainly timely. It was the 1940s, when people were dealing with a lot of the same things we are dealing with today.”

Then she added: “Absurdism is a good answer to a world gone crazy.” 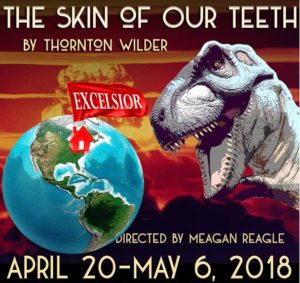