Gainesville’s home for live professional theater kicks off its 45th season with a gripping adaptation of George Orwell’s dystopian novel about Big Brother that, in 2017, seems disturbingly prophetic.

Long before “alternative facts,” “fake news” and “tweeting,” George Orwell introduced terms such as “double think,” “newspeak” and “thought crimes” to describe governmental tactics of deceit and suppression in his best-selling novel “1984.”

In Orwell’s book, written in 1949, the ruling Party of the fictional nation of Oceania defines its own reality through a “Ministry of Truth” that purposely rewrites history by denying its very existence.

“The book has made a resurgence in the last year or so,” said Lauren Warhol Caldwell, artistic director of the Hippodrome Theatre. “Volumes have sold out. It’s quite amazing that Orwell’s story has come to our present time right now.”

Not surprising is that the Hippodrome has seized the opportunity by opening its 2017-18 mainstage season with Andrew White’s provocative and spellbinding adaptation of 1984. The theater will have discounted preview performances tonight and Thursday at 7 p.m., leading up to Friday’s Opening Night.

The Hipp will have eight performances a week of 1984 through Sept. 24.

“This play dives straight into the dangers of restricting free speech and free press,” Caldwell said. “When we reread ‘1984,’ we feel its message resonates with us more than ever.”

The production, the Southeastern Regional premiere of 1984, is a collaboration between the Hippodrome and the UF School of Theatre + Dance. The cast and crew bring together the talents of two powerhouse institutions in Gainesville.

“In doing a co-production, we try to find a vehicle that will open both our seasons at the Hippodrome and in the School of Theatre and Dance as well as a vehicle that takes advantage of the resources we both have,” said Dr. Jerry Dickey, in his sixth year as director of the UF School of Theater + Dance. “This allows us to do something we might not tackle on our own.”

In the past, the theater and college have collaborated on such productions as Avenue Q, Peter and the Starcatcher and, last year, Stage Kiss. Dickey said that 1984 was an appropriate choice for this season.

“You just look at the headlines around the globe, and Orwell’s vision in 1949 and what the future would be like — we’re already there!” Dickey said. “In about any society you look at around the globe, individual rights are under threat. To me, this seemed very timely and something that I wanted our students to get involved in.”

Winston’s job in the Records Department is to rewrite articles and news items to match whatever ideas or agendas the Party is promoting at any given time. The old versions get literally swept away forever.

“To Big Brother!” Winston shouts in unison with his colleagues in the Ministry of Truth as they gaze up toward a projection screen. His words, however, seem to ring hollow.

McGinty said he has read Orwell’s novel three times since earning the lead role and identifies with the character by more than the fact he and the lead character are both 39 years old.

“He’s kind of an introvert, and so am I,” McGinty said. “He finds himself awkward socially, but he tries to navigate through the world as best he can, which isn’t very well. I can identify with that.”

Johnson, Hayter, Drushal and Krek are all working toward their MFA Acting degrees at UF while Zozaya and Mendez are BFA Acting candidates there. Morsey and Heidenreich, along with McGinty, are all members of the Hippodrome Acting Company.

Zozaya said he is excited to be performing in his first production at the Hippodrome after pursuing his undergraduate degree the past four years in Gainesville. Working on a professional stage can only bolster his résumé.

“It’s been an absolute pleasure and a joy working with the MFAs I sort of came up with but also to work alongside people that I’ve seen perform several times, like Niall and Sara,” Zozaya said. “Coming here and recognizing them and getting to work with them not only gives me insight into what I hope my life is like, but it also forces me to elevate my work standard to their level in a professional setting.” 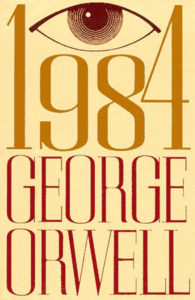 Many cast members were already familiar with the novel “1984.” After all, it’s been required reading in most high school literature classes for decades. It’s also part of “One City, One Story,”  the Hippodrome’s community-wide read and conversation initiative.

“I read it in the ’70s when I was in college and I thought it was just really kind of a cute, light-weight science fiction novel,” Morsey said. “That’s what it felt like then.”

Heidenreich, who made his Hippodrome debut earlier this year as Claudius in Hamlet, said that the impact of Orwell’s vision had not come to realization in the actual year of 1984, when the novel was set. The arrival of smartphones and personal computers came a decade later.

“We were not yet nearly as aware as we are today of Big Brother actually watching,” he said. “Today, every time I hit a stroke on a keyboard, something shows up [somewhere] almost immediately.”

Heidenreich recalled one time recently when he was having a phone conversation with his daughter while the microphone was open on his computer. An image of a product he mentioned magically appeared on his screen without so much as a keystroke.

He added that, in addition to voice-recognition software, Orwell was prophetic on more than a few things.

“Back in the ’80s, no one was talking about global warming as if it was a real thing,” Heidenreich said. “And yet, Orwell had imagined a world where it was 84 degrees in December. It’s extraordinary.”

The Hippodrome and UF School of Theatre + Dance have made their 1984 production an immersive experience. Mihai Ciupe’s set design has a cold, industrial feel that you would expect from a dystopian world, while Michael Clark’s projection design shows a continuous reel of images that makes the story onstage that more compelling.

“I think the technological aspect of having the screen with the graphics on it says a lot about the technology in 1984, how sophisticated they were able to do that in Orwell’s world,” Caldwell said.

Be warned. The play is not for the squeamish. There’s violence and one brutal torture scene that might make you feel responsible for the cruelty by remaining in your seat. Parents might also be wise to leave the children at home because of torrid love scenes involving Winston and Julia.

Overall, 1984 is a chilling depiction of a future that we all fear but seem determined to allow happen. The Hippodrome and the UF School of Theater + Dance have pulled off another masterful collaboration that will make Gainesville audiences cringe, but also applaud.

Eight performances a week through Sept. 24.