The longtime Gainesville resident, best known as a performance artist, puts his writing skills on display this week when the Acrosstown Repertory Theatre presents the world premiere of his drama centered around a mentally ill patient and his therapist.

Tom Miller has pulled off a few notable stunts in his day. Just a few weeks ago, he tested out a new device called the Chromatic Electromagnetic Birdometer, designed to remotely control the flight path of more than 1,000 birds within a one-square-mile radius of Depot Park. (No birds were harmed during the demonstration.)

Last year he and some friends “instilled” (and later carefully removed) an invisible sculpture in the middle of Bo Diddley Plaza. Then there was the time Miller unflinchingly stared into the gaping mouth of Ted Cruz for two hours or when he listened to every Eagles’ song to determine whether they sucked. (They didn’t.) Years ago, he did a 17-hour marathon reading of Truman Capote’s “In Cold Blood.”

You get the idea. It was all in fun … or something like that.

Now — finally — Miller wants to be taken seriously. No, really, he does.

This week the performance artist takes us to another realm — with his writing skills — during the debut of his play UMMU at the Acrosstown Repertory Theatre, off South Main Street (in the Historic Baird Hardware Center).

Directed by Michael Presley Bobbitt, the drama follows an artist lost in a remarkably layered utopia of his own imagination and a psychiatrist hellbent on getting inside the man’s head — as well as inside his imaginary world. There’s also a beautiful woman who claims to be a psychologist, but she may or may not even exist.

At least, that’s the CliffsNotes version of the play. Miller leaves it up to the audience to figure out what is real and what is not during the 70-minute (no intermission) performance.

UMMU has a preview performance Thursday night at 8. All tickets are $5 (cash only). The play’s Opening Night is Friday at 8 and continues with three performances each weekend through May 28. Tickets are $15 (discounted to $13 for seniors, students, veterans and active military with ID).

Although this will be considered UMMU‘s “world premiere,” the Acrosstown performed two stage readings of the play a couple of years ago in front of a packed theater each night.

“We did a stage reading and I played the lead,” Bobbitt said. “We set aside 15 minutes after the play for the audience to talk about it, and both went an hour. They loved it.”

A similar “post-mission” talk-back session with the audience is planned after each performance of UMMU.

“The stage reading was to see what the words felt like in the theater space with an audience,” Miller added. “The response was pretty profound.”

When the play was chosen for the Acrosstown’s 2016-17 season, Bobbitt insisted on directing it.

“I’ve known Tom Miller for 19 years — he was the very first person I met in Gainesville,” Bobbitt said. “We spent many years being silly doing performance art and spoken-word shows. Basically, we were comrades in bullshittery.”

Despite years involved in theater, Bobbitt said he does not consider himself a director. UMMU, though, is a rare exception.

“I’m a playwright and actor, but my friendship with Tom is tied up in this,” he said.

UMMU has only three characters. West Joseph plays John, a heavily medicated man who has created the fantastical UMMU in his head. Shamrock McShane plays Fred, the psychiatrist/psychologist who has spent many years determined to immerse himself in UMMU and to better understand John. And then there is Lola Bond as Celeste, a strong-willed (albeit ambiguous) character who appears to inhabit both worlds.

“Celeste might be an alien, she might be imaginary or she might be part of John’s consciousness,” Bobbitt said. “The whole play is a study about the nature of identity and an exploration of the lines we all draw between reality and unreality. … It’s a psychological coup.”

Bobbitt said that for the play to work, audience members will also need to become fully immersed in the fantasy world of UMMU. To help do so, Bobbitt along with lighting guru Michael McShane have created a set that is divided into two distinct worlds. The front of the stage area contains two chairs representing Fred’s office as well as a stool from which Celeste delivers a monologue.

Behind them, beyond a wall of rocks, lies John’s fantasy world complete with foliage and actual trees (“cut out of my own forest,” Bobbitt said). A colorful mural with piercing, catlike eyes fills one entire wall. There’s even a waterfall. Michael McShane’s brilliant lighting completes the mystical world of UMMU.

“The main character [John] is going crazy,” Bobbitt said. “He’s so turned off by the imperial nature of the modern world and all the horrible things we do to each other that he’s retreated into a fantasy world. He’s created 40,000 drawings and paintings, and he’s deeply immersed in his neurosis.”

“John exists in two places at once so convincingly that people can’t understand if he’s in the real world or not,” Joseph said. “I think of John as a god of imagination — like when a child plays, it’s so pure. When young kids play with toys, they don’t see toys, they see entire universes.”

Joseph, 40, is best known in Gainesville for his singing and songwriting skills. His jam band, Wester Joseph’s Stereo Vudu, blurs the genres of rock, blues, soul and alternative.

However, Joseph is also an accomplished actor. He recently starred in Stick Fly at the Actors’ Warehouse and 12 Years a Slave at the Atlanta Black Theatre Festival. In 2012, he appeared as a guitarist in the full-length feature film Jayne Mansfield’s Car starring Billy Bob Thornton, Robert Duvall, John Hurt and Kevin Bacon.

“When you see Wester Joesph slip in and out of his neurosis [in UMMU], it’s electrifying,” Bobbitt said.

Shamrock McShane’s Fred is also a treat, playing John’s shrink with just the right mix of curiosity, pathos and cynicism. He credited Miller for creating the world of UMMU and allowing him and his fellow actors into it.

“It’s really all an illusion,” McShane said. “You put the characters onstage, people accept it as reality, but it’s all just words. It’s all a mind game in Tom’s head, and then he tries to put it in the head of the audience.

“This is a great night at the theater because it’s all brain candy.”

McShane, 65, is a veteran of local and regional theater. He first performed at the Acrosstown Repertory Theatre in 1984. His credits include Willy Loman in Death of a Salesman, Prospero in Shakespeare’s The Tempest and another psychologist, Sigmund Freud, in Secret Obscenities.

By the way, he also performed alongside Joseph in 12 Years a Slave at the Atlanta Black Theatre Festival and was named Best Supporting Actor for his role as three characters. (The play was directed by Gainesville’s Rhonda Wilson.)

Bond, meanwhile, performed at the Acrosstown earlier this season in Tommy and Commander. Celeste, however, provides a special challenge in UMMU.

“She is John’s conscience,” she said. “She is everything John needs and/or wants. That’s what she genuinely thinks.”

Bond said that UMMU is an important piece because of the way Miller addresses the once-taboo subject of mental illness. She said that, like most good theater, UMMU leaves you thinking long after the play is over.

Miller said that UMMU, based loosely on a true story, was the result of a playwriting class he took five years ago and taught by Ralf Remshardt, a theatre professor at UF.

“I had thought about this play for 20 years before I even wrote it,” Miller said. “I didn’t get a lot of criticism for it in the class, so I left it alone. I finished it, turned it in and got an A. I have not adjusted anything since then.”

He also has yet to see the play, not even during rehearsals.

“I’m not directly involved with the project,” he said. “When I see it Friday [on Opening Night], I’ll be like every other audience member.”

OK, so what exactly does “UMMU” stand for anyway?

“‘UMMU has at least two specific meanings, which I am not going to reveal,” Miller said. “The third meaning is that it means the same forward as backward.”

However, Miller does make one thing clear.

“I want everybody to come to the theater and experience the best of what theater is supposed to be — which is risky, dangerous, provocative, thoughtful and life-affirming.” 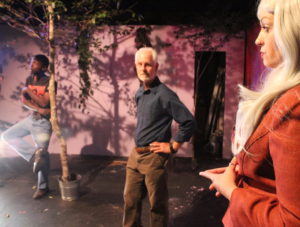 Let us know what you think about the performance by going to the Leave a Reply area below.