The Hippodrome’s newest stage comedy, which begins this week, will make you laugh but also might make you ponder the meaning of life.

Rebecca Foster, the central figure in Becky’s New Car, opening Friday at the Hippodrome State Theatre, is a middle-aged woman who unexpectedly finds herself at a crossroads in her life.

Metaphorically speaking, she can choose to proceed straight through the intersection and continue on her current course as as a loyal wife to her adoring husband, a patient mother to her psychology-major son (“fruit of my actual loins”) and a responsible employee at a successful car dealership.

Or Becky can take a sharp turn and explore exciting new places that may or may not be fulfilling and/or meaningful.

“I think the car is a perfect metaphor,” said Nichole Hamilton, who plays the charming and cheerful Becky. “It starts off with this nice easy drive and then things really speed up.”

Becky’s New Car, written by Steven Dietz and directed by former UF theater professor David Shelton, has preview performances tonight and Thursday at 7 p.m. Preview tickets are $18. After that, the mainstage production will have eight performances a week through March 19 with tickets ranging from $30-$35 (discounted for students, seniors and military).

Hamilton, whose most recent Hippodrome performances include Mrs. Kendal in The Elephant Man and the Monster in All Girl Frankenstein, is on cruise control in Becky’s New Car. She busts down the fourth wall with her opening lines (“Hi. Hello. … So glad you stopped by. …”) and invites the audience along on her bumpy journey.

And what a journey it is!

Becky’s mundane life suddenly gets interesting one evening when billboard tycoon and widower Walter Flood (Gregory Jones) stops by her cubicle at Bill Buckley Lexus-Saturn-Nissan-Mitsubishi (“Home of the Fifty-Thousand-Mile Smile”). Walter wants to buy nine cars as gifts for his employees, but what he ends up wanting even more is Becky herself.

“We chose this play because we found it interesting with the questions you ask at different stages of your life,” said Lauren Warhol Caldwell, the Hippodrome’s artistic director.

“It’s like watching scrambled eggs being cooked. Just to watch Becky go from place to place, her life is just scrambled. There’s no sunny side up.”

Shelton, who retired to tiny Boonville, Indiana, has returned to Gainesville to direct the production. It is his first Hippodrome performance since 2015’s Vanya and Sonia and Masha and Spike in which Caldwell played soothsaying cleaning lady Cassandra.

“David was in the MFA department when I was a student at the University of Florida,” Caldwell said. “When he retired, he had more time to direct. I finally got directed by him. I think he likes getting out of Indiana during the winter.”

Shelton said his objective in directing any play is to be faithful to the playwright. He credited Caldwell for casting Becky’s New Car with quality actors.

“These are all gifted gifted people — it’s such a blessing,” he said. “I don’t have to worry about teaching them how to act.”

Although Shelton took a physical journey to get from Indiana to Florida, many of the actors in Becky’s New Car mentioned that the play reminded them of personal journeys they’ve recently taken.

Jones, for example, is still adjusting to retirement after teaching theater for 28 years at Santa Fe College. McGinty and his wife are on a new journey following the birth of a child last year. Mercer is a newlywed, a new adventure in itself.

“I just got married, so I’m seeing the world newly kind of — something I’ve never been able to do before,” he said.

“It’s a lovely exercise on recognizing what love is, and what it’s not,” he said. “It’s an exploration of, you know, what does love mean for me? I think we all ask that. It’s a hard question.”

From an acting standpoint, Stancil, a third-year MFA student at UF, is making her Hippodrome debut and will soon be starting a career in Los Angeles following her spring graduation. Meanwhile, Lishawa is making the leap from community theater to the professional stage.

“It was daunting before I stepped in the door, but as soon as I had the script in my hand with the other actors, [the Hippodrome] became the most magical and nurturing place I could have hoped for,” said Lishawa, fresh off an exhausting performance as Vladimir in Waiting for Godot at the Acrosstown Repertory Theatre.

Hamilton said she can relate to Becky’s midlife crisis on some level.

“I think that Becky’s journey in life and my journey in life are very opposite,” she said, “but the sense of being overwhelmed, not knowing what’s happening next, and then really taking these deep existential moments of ‘What is life?’ ‘What is my purpose?’ ‘Am i doing anything worthwhile?’ — we can all empathize with that.” 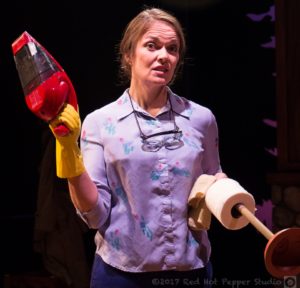 Eight performances a week through March 19

* Please let us know what you think of the production. Leave a Reply below.