The Hippodrome Theatre’s outrageous stage production, which opens this week, might make you wince or laugh with guilty pleasure. Just be sure to leave the kids at home!

If Tyrone, the foul-mouthed antagonist in the play Hand to God, were a child, his disruptive behavior simply wouldn’t be tolerated. Under normal circumstances, he surely would spend most of his days alone in time-out.

But these are not normal circumstances, and Tyrone is not a child. He’s not even human. He’s a sock puppet who speaks his mind without a filter. And, oh, that temper!

In the Hippodrome Theatre’s newest production, which opens Friday night, Tyrone transforms from Elmo cute to Chucky ugly before your very eyes. Whether you grin or grimace at his antics might just reveal the kind of person you are — or at least the mood you’re in at the moment.

“If you were to ask 15 people what they thought the play was about, depending on where we are in our lives, I think you’ll get 15 answers,” said director Lauren Warhol Caldwell. “That’s really great writing. And this is a really smart play.”

Leading up to Opening Night, Hand to God will have preview performances tonight and Thursday at 7. The production continues through Feb. 5 with eight performances a week. Tickets range from $30-$35, with discounts for students, seniors and military. (All tickets for the Tuesday, Jan. 17, show are only $10.)

Pastor Greg (Charlie Mitchell) has requested that Margery put on a puppet show for the congregation. That’s all well and good until Jason’s once-lovable puppet, Tyrone, starts getting so out of hand that the only solution is an exorcism. The play’s otherwise folksy soundtrack even includes a few bars from a particularly head-spinning 1973 horror classic.

Each human character in Hand to God, adeptly written by Robert Askins, is struggling to find love and acceptance in one form or the other. Tyrone’s mission, it would appear, is to sabotage those intentions, beginning with Jason’s interest in Jessica.

“I sort of describe it as what happens when there is this sustenance of darkness that gets in the core of your body,” Caldwell said. “The savior is hard to find and he might be just where the devil was.”

Hippodrome newcomer Jon Kovach not only plays Jason but also manipulates and voices Tyrone with conviction. The dual role is one of the highlights of the performance.

“It’s challenging,” he said, “but as an artist I think it’s important to remember to go into the fire to see what scares you. That’s the only way you can grow. It’s what I want to continue doing.”

Kovach, 26, is surrounded by fellow cast members who all have previous Hippodrome experience. Atkins was seen most recently in The Toxic Avenger, Reich in Whatever Happened to Baby Jane? and All Girl Frankenstein, George in Vanya and Sonia and Masha and Spike, and Mitchell in Peter and the Starcatcher. Mitchell, a UF theater professor, also wrote and directed The Snow Queen a year ago on the Hippodrome’s mainstage.

Hand to God contains more adult subject matter than most recent Hippodrome performances. In fact, the production comes with a disclaimer: “This play may contain puppets, but it is definitely not for children. Trust us on this. The play contains strong language and adult situations.”

Although Gainesville is technically located within the Bible Belt, Caldwell said she trusts that local theatergoers will embrace Hand to God. The production earned five Tony Award nominations, including one for Best New Play, when it played to sold-out houses on Broadway.

Reich said she hopes audiences take away more from Hand to God than the foul language or content, which might or might not include a raucous sex scene between two consenting puppets.

“Everybody talks a lot about the adult language and content,” she said. “Aside from that, I personally see a lot of beauty in the piece and I hope that’s what audiences walk away with. I think the play says a lot about humanity. We’re all human beings. There’s that balance between good and bad. There’s energy and darkness in all of us and there’s light in all of us, and different things bring that out.”

Atkins refers to Hand to God as a “cautionary tale.” Her conflicted character Margery crosses moral and legal boundaries that may not be forgivable.

“It’s all about what not to do with your emotions, which is to bury them down and act like they’re not there because that’s always going to come back and bite you in the ass,” Atkins said. “When you’re hurting, it doesn’t mean you have to hurt other people.”

Mitchell’s character attempts to be the moral compass of Hand to God, but even the well-intended pastor shows signs of weakness.

Ryan George, who plays the emotionally distant Timmy, said he saw Hand to God when it was all the rage on Broadway. The New York-based actor said he can’t wait to see how Gainesville audiences respond to the production.

“When I saw it in New York, I was laughing so hard immediately!” he said. “The energy in New York is very different than the energy in a town in Florida or a town in Georgia. We are in the South, but these are people that almost everybody can relate to. I’m looking to be surprised about how people receive it.”

Caldwell said that Hand to God is the most produced show in regional theaters across the nation.

“The reviews were really and surely unanimously off the chart about how funny it is, about how unique it is,” she said. “It developed sort of a cult following. It was extremely popular.”

She said the Hippodrome was fortunate to find someone as talented as Kovach to play Jason and his alter-ego puppet, Tyrone.

“What he’s doing is not easy — finding the technique, first of all, manufacturing the life of the puppet, and not ever letting the puppet go ‘dead,'” she said.

Most impressive, she added, is the way Kovach finds his own voice as Jason versus Tyrone’s voice and all the switches involved.

“The play is like one of those roads going down the mountain in Colorado,” Caldwell said. “It’ll take you one place and then, boom!, it’ll turn you another way.”

George has some advice for anyone interested in seeing Hand to God.

“Come with no expectations,” he said. “Just come with an open mind.”

Reich quickly added: “With an open mind and an open heart.” 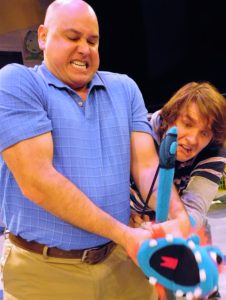 Eight performances a week through Feb. 5.