If you have an inexplicable appetite for the undead, you might want to make plans to spend Saturday night downtown at the Atlantic Nightspot.

Rachel Wayne’s favorite zombie movie is, without question, Night of the Living Dead.

Director George Romero’s 1968 film shows how a group of individuals huddled in an abandoned farmhouse deal with each other while fighting for survival against ravenous corpses rising from a nearby graveyard.

“Many people still look at that as the definitive zombie film,” Wayne said. “It has a strong script that explores the complexities of humanity in the face of crisis.”

Filmed in black-and-white on a $114,000 budget, Night of the Living Dead remains a cult classic almost 50 years after its release.

On Saturday night, Wayne pays homage to Romero and all things zombie by producing Zombieville, a film festival and variety show at the Atlantic Nightspot, 15 N. Main St.

“This is an immersive show where the stage is part of the space,” Wayne said. “There’s no line drawn between the performers and the audience.” 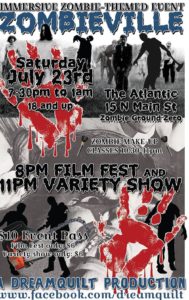 The evening begins at 8 with the screening of White Zombie, the original zombie film from 1932 starring Bela Lugosi, and then a showing of the 96-minute Night of the Living Dead.

When the films end, there will be a brief discussion about what was seen—and how everyone should cautiously proceed.

“The idea is that things at this point are starting to happen, and it’s just going to keep getting stranger,” Wayne said.

The Atlantic will then transform into what Wayne describes as “Ground Zero” for the zombie apocalypse.

Makeup artist Angela Knox will offer instruction on how to blend in with zombies. Knox learned her makeup skills while working on the set of the 2009 film Zombieland. There will also be a demonstration of weapons training for fending off zombies.

“Apocalypse training is very important,” Wayne deadpanned. “Everyone should know the basics of survival, from makeup and weapons to food safety.”

Wayne added that by this point of the Zombieville program, there will be heightened intrigue. People should start to feel trapped, she said, so they might as well be entertained. 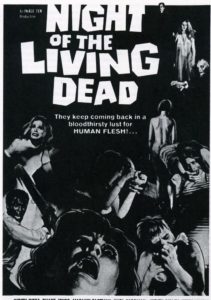 At 11 p.m., the variety show gets in full swing with a series of performances by local and visiting burlesque artists portraying luminaries in the zombie apocalypse, from The Walking Dead’s Michonne to The Evil Dead’s Ash.

There will also be musicians and a puppeteer. Members of Dystopia Rising, a live-action, post-apocalyptic role-playing group, will add authenticity to the festivities.

The immersive-style event is a new format for Wayne, whose DreamQuilt Productions is putting the show together.

“There are a lot of moving parts to coordinate,” she said. “It’s pretty organic.”

Admission is $10 for the entire evening. However, $6 tickets will be available to anyone who wants to attend just the film festival or just the variety show. The event is limited to those 21 years and up. 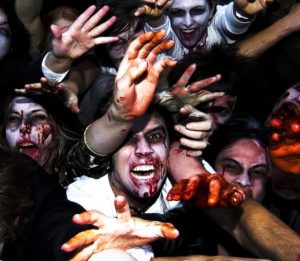 Zombieville is all for fun, but Wayne said that her collegiate studies in anthropology and film taught her that public interest in zombies fluctuates with real-world events.

White Zombie came out during the Great Depression. Night of the Living Dead was released during the height of the Cold War. The rise of bioterrorism in the early 1990s sparked a resurgence in zombie films as has today’s unstable world stage.

“Losing our identity is a core fear of western society,” Wayne said. “To some people, there is a shifting sense that there is some other force out there that can turn you into a flesh-eating zombie!”