When the crowd settles in at Bo Diddley Plaza tonight and listens to Hot Club de Ville during the Free Fridays concert, they might think they’ve been teleported to Paris.

For one thing, vocalist Patti Markoch will perform many of the songs in French. For another, the five string instruments backing her up will create a sound with a certain, how do you say, je ne sais quoi.

That distinct sound is what is known as gypsy jazz or, as it’s referred to in France, jazz manouche. It is the style of music that Jean “Django” Reinhardt, a Belgium-born guitarist and composer, made popular in the 1930s with the help of famed jazz violinist Stephane Grappelli.

“It could have been Hot Club de Hogtown, but I got voted down on that one,” Liquori said with a laugh.

Hot Club de Ville will try to replicate the gypsy jazz sounds of Django Reinhardt, Irving Berlin, George Gershwin and other composers when it performs on the Bo Diddley Plaza stage from 8-10 p.m. The concert is free.

Liquori wants everyone to enjoy every note, so he’s offered another suggestion.

“This is quiet, intimate stuff,” he said. “The closer to the stage you are, the better.”

“He was burned in a fire, so he only had the use of two fingers on his left hand,” Liquori said. “Because of that, he couldn’t play the guitar like most people did, across the fingerboard. He had to go up and down really fast. It changed the style of guitar. Until then, guitars were playing mostly rhythm for other instruments.”

“This will be the first time we’ve had three guitar players and one of the few times we’ve had a violin player and a vocalist at the same time,” Liquori said.

In addition to playing bass, Forbes is a world-renowned maker of violin bows. He flew back to Gainesville this week from Sweden, where he has been working on bows for the Swedish National Orchestra. Lawson, the violinist, recently returned from a gig in New York City. 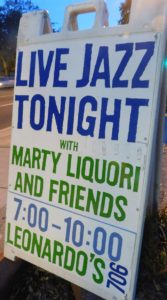 Abernathy, at 20, is the youngest member of Hot Club de Ville. The Gainesville native is a UF music major.

Fletcher, 24, drives to Gainesville from his home in Cocoa Beach to perform in the active jazz scene. He started playing rhythm guitar with Hot Club de Ville five years ago when he was still a teenager.

“It’s been a great opportunity for me,” he said. “I learn so much from playing with them.”

“It was great to see so many people get excited about the old-style music,” Fletcher said.

“It’s always fun playing with these guys,” Markoch told the Leonardo’s 706 audience before breaking into Cole Porter’s “I Love Paris.”

Markoch, also an accomplished flutist, first sang with Hot Club de Ville in early 2015 at the invitation of Liquori.

“I’ve loved every minute since Marty asked me to sing with them,” she said. “He’s spontaneous, he’s fun and he lets me be me. That’s what jazz is all about.”

Markoch has an extensive musical background. She and her former husband were a stage duo for 13 years. In the early ’80s, they performed six nights a week at the Hilton at the Kansas City International Airport. 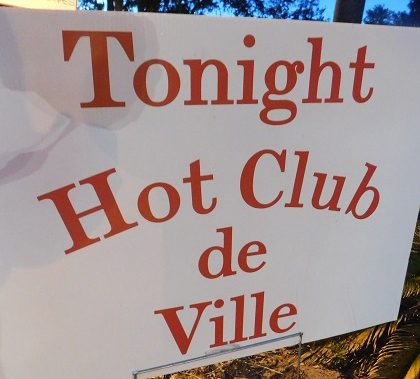 Earlier this week, Hot Club de Ville gave the dinner crowd at Leonardo’s 706 a taste of what to expect during tonight’s gypsy jazz show. (Liquori pointed out that it was May 16, which happened to be the 63rd anniversary of Django Reinhardt’s death at age 43.)

Liquori said the Bo Diddley Plaza crowd will be entertained tonight even if they weren’t jazz fans when the evening began.

“They’re going to hear a lot of different rhythms,” he said. “It would be classified under ‘world music.’ It’s very string-based, where the guitars create the rhythm instead of drums.”

He added: “We want everyone to walk away with a smile.”

Marty Liquori is an accomplished jazz guitarist in Gainesville, but he’s known around the world for other memorable achievements. Read Gainesville Downtown’s profile of him at Marty Liquori All Jazzed Up.

If you have a comment about this article or about Hot Club de Ville, please Leave a Reply in the space below.