Ken Eats Gainesville, the blog written by Gainesville resident Ken Peng, keeps a close eye on the food scene in town. And sometimes what he writes doesn’t go down very well.

Just for the record, Ken Peng’s 16,366 Facebook followers should know that he eats spaghetti and meatballs one forkful at a time.

In other words, Gainesville’s No. 1 food blogger chews his food like everyone else. But it’s the way he writes about that food—particularly restaurant meals—that has elevated him to social-media rock star in this once culinary-starved college town.

We recently sat down with Peng at Piesano’s Stone Fired Pizza to talk about the evolution of the Gainesville restaurant scene as well as a scary encounter he recently had that proves just how seriously some people take the guy’s opinion.

Before the juicy stuff, however, a little background is in order.

Peng came to Gainesville from South Florida in 2004 as a UF freshman. He was not prepared for life away from the big city.

“It was a culture shock at first,” he said. “My first meal in Gainesville was at the old Atlanta Bread Company on Archer Road. Two friends took me to Szechuan Panda [on Northwest 13th Street], but there was really nothing much to offer food-wise at that point.”

While attending school, Peng gained some notoriety writing restaurant reviews for the Independent Florida Alligator. Then he graduated, stayed in Gainesville and focused on a career in finance. In early 2014, he was between jobs and bored out of his mind.

“I was sending out résumés and running out of things to do around the house,” he said. “Anybody who knows me personally knows that I’m a hypercritical person. So I started posting restaurant critiques on my personal Facebook page.”

A friend of mine was like, ‘Whoa, you should do a food blog.’ I was like, ‘Nah. I don’t think anybody wants to read that.’
— Ken Peng

One of those early reviews was for the La sso’s Steakhouse on South Main Street in downtown Gainesville. Peng panned the ill-fated restaurant for its food and its, umm, odor. He wrote: “The second we walked in, I was greeted with a smell of sewage and industrial cleaning solution. It literally smelled like a dirty bathroom or New York City sewage plant. …”

Although Peng soon found fulltime employment again in his chosen field, he continued to blog about food under Ken Eats Gainesville, a catchy title he had used almost a decade earlier at the Alligator.

Then people encouraged him to develop an appropriate logo.

“I had this really stupid looking photo of me at my friend’s wedding, clutching a bunch of empty wine bottles,” Peng said. “I had this joyous look on my face like an idiot. I said, ‘You know what? I think I’m gonna use that.’

“I think I’m recognizable because I’m a weird Asian guy with a faux hawk. It’s like a brand.”

The marketing strategy, much to Peng’s surprise, quickly paid off.

“I just started posting stuff and, overnight, people were following my page,” he said. “All the sudden I see my page ‘Likes’ jumping. I’m like ‘What the hell is happening here?!’ And then I just rolled with it. I just kept writing and kept posting, and it took on a life of its own.”

Peng soon gained a reputation for his straight-forward restaurant reviews, calling it like he tasted it. Today, Peng’s face (and hair) is recognizable wherever he goes around Gainesville.

And that is why the foodie recently became embroiled in some drama that unfolded on the streets of downtown Gainesville—not once but twice!

According to Peng, he was leaving Dragonfly Sushi and Sake Co. one night when he sensed he was being watched.

“Out the corner of my eye, I caught this guy glaring at me,” he recalled. “I was going to ignore him, but he was going out of his way to be obvious, giving me these angry glares. I finally asked him if there was a problem. And he said, ‘Yeah, I know who you are. You should keep your opinions to yourself. It’s taking every ounce of me not to punch you in the face.’”

The angry man refused to identify himself, but Peng soon found out that he was a newly hired chef for a local restaurant group. Peng had written an unfavorable review of one of their downtown establishments. Like any responsible blogger, Peng wrote about the sidewalk encounter in an online post.

I always say that if one person’s bad opinion of a place sinks the ship, then there are holes in that ship to begin with.
— Ken Peng

“That post got 40,000 views, 800 likes and sort of blew up in their face,” he said. “So their owner messaged me and said he would like to apologize. But I know their reputation in town. They’ve been very dismissive of me in the past. Employees there have told me before that management said ‘Don’t pay attention to that guy, he’s a joke,’ instead of looking at their own problems.

“I always say that if one person’s bad opinion of a place sinks the ship, then there are holes in that ship to begin with.”

“He could have handled that a little differently,” Peng said. “He could have said, ‘Hey, I’m the chef there now. Things are different. We’re making changes. Please come back.’ And I would have been like, ‘OK, yeah, I’ll check that out.’ But he was a little baby about it.”

Although Peng refers to the hospitality group as “douchy,” he wants to put the incident in the past. To extend the proverbial olive branch, he removed the blog post.

“Afterward is when management backtracked and said, ‘Well, we’d love for you to come and check out the food again.’ I was like, ‘You guys are joking, right? Do you think I’m that much of an idiot that I would come back now and try your food again?”

Interestingly, since that incident, the restaurant at the center of the controversy closed for lunch for a week to revamp its overall menu.

Peng, however, is a firm believer in karma and said he would rather focus on the many good things happening on the local restaurant scene. He described the past decade of growth in Gainesville as a “metamorphosis.”

“I think you’d be hard-pressed to find another town in Florida that’s growing as quickly as Gainesville is,” he said. “It’s booming. There was a time when people couldn’t wait to get the hell out of here, which is the mentality of a lot of the students here, but I kind of want them to stay and help and build this town into something it could be.”

Peng said he encourages UF and Santa Fe College students to step out of their comfort zones and explore all that the area offers.

“For God’s sake, you’re in college. Go out and do something,” he said. “Wander down to Paynes Prairie. Go antiquing in High Springs. Go to the springs up there. Do something! Don’t just go to Midtown and get plastered. You’ll have plenty of time to drink when you’re sad and depressed and you’re older.”

If I say something about a place, it’s usually pretty accurate…
— Ken Peng

Peng doesn’t apologize for his outspokenness, especially his restaurant reviews. 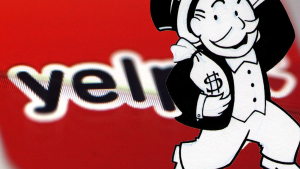 Peng has a low opinion of Yelp, where people can randomly post often-critical reviews of restaurants. He said the people should watch the recently released documentary Billion-Dollar Bully to better understand Yelp’s questionable business practices.

“I don’t go into a place looking to shut them down or looking to extort them or some nonsense like that, which is why Yelp gets such a bad reputation,” he said. “It’s basically an extortion ring. In the documentary, all these business owners talk about their experiences dealing with Yelp, and how [Yelp] deals with negative restaurant reviews. ‘If you slip us a few bucks, we’ll make those bad reviews go away.’”

Ken is a big fan of the downtown restaurant scene and welcomes such recent additions as Crane Ramen and MoJo Hogtown Bar-B-Q. He recently recommended five restaurants for Valentine’s Day, four of which are downtown: Crane Ramen, Mark’s Prime, Dragonfly and Emiliano’s Café.

“There are just lots of cool stuff happening,” he said. “I think the state of downtown is improving. I think there’s lots more to go. Parking is terrible. I’d like to see some bigger restaurants come in. There’s a lot of empty space, but I think it’ll get better.”

Peng said he would like to see a French restaurant open up downtown, or perhaps a good Chinese restaurant.

“I’m Cantonese so I’m sick of seeing the take-out joints that are all over the place – what people perceive to be Chinese food but it’s all just Americanized nonsense,” he said.

Not only do Peng’s followers religiously read his every word, local restaurateurs follow Ken Eats Gainesville as well.

“Ken is very fair and he’s a true foodie,” said Diego Ibanez, whose family has owned Emiliano’s Café for more than 30 years. “You have to respect that he writes for his audience. He doesn’t give the review based on public opinion. It’s refreshing to hear someone outside the industry who has educated himself on the subject.”

Another restaurant with a high regard for Peng is Omi’s Playa Azul. He named the Sun Center eatery “Best New Restaurant of 2015,” writing “It’s the closest thing we get to Miami flavors and feel in Gainesville.”

“What I like about Ken is that he visits a restaurant multiple times before he writes something,” said Harry Rivera, general manager of Omi’s. “He is also very thorough. When he doesn’t like a place, he’ll give a reason. That’s why he has a really good following.”

Across the Sun Center atrium, the owners of Sababa Israeli Cuisine were flattered when Peng named it the area’s “Best Mediterranean” restaurant.

“Of course we’re happy he gave us a raving review,” said Yael Goldstein, whose partner, Riley Sullivan, does most of the Middle Eastern cooking. “So many people found out about us through Ken. He’s great advertising!”

“You might not agree with everything he writes, but he has a lot of knowledge about food,” she said. “I know people who religiously go to places or won’t go to places he reviews. He keeps you on your toes and makes you want to work harder.”

Peng said he has no personal agenda with Ken Eats Gainesville except to see the restaurant scene improve—along with all other aspects of town.

“If you want these brilliant people who graduate from here to stay here, you have to give them something to stay here for,” he said. “I’m all for growth and progress. I’m not into crowds or chaos. But it’s kind of up to all of us to make Gainesville grow the right way.”

To get a taste of Ken Peng’s blog, visit his Ken Eats Gainesville website.

Do you have a comment to share about Ken Eats Gainesville or the downtown food scene? Please Leave a Reply in the section below.