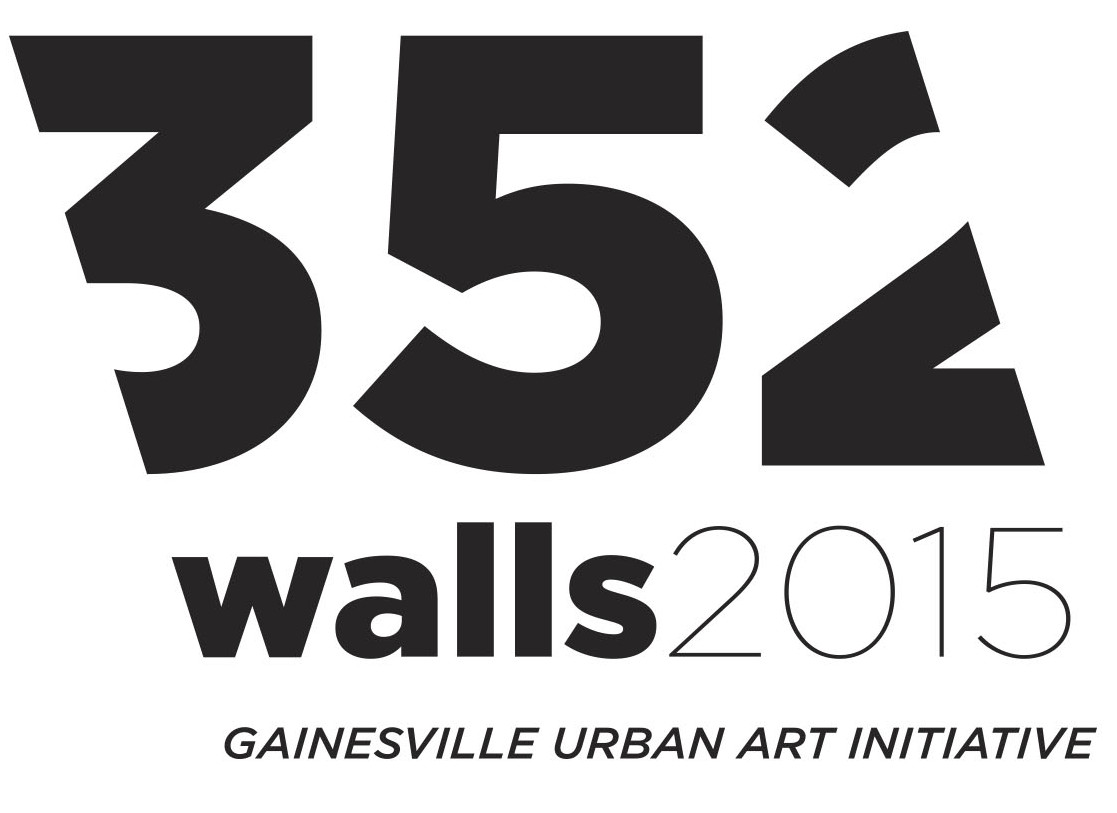 The 352walls project, involving a dozen internationally known street artists, has given the downtown area a dramatic facelift. Tonight’s Artwalk is a great opportunity to view the completed artwork.

To passersby on Southwest 2nd Street, the large mural on the wall across from Volta Coffee could be almost any hard-charging football player. But the man who painted the image, Miami-based street artist Reggie O’Neal, knows exactly who the player is. Or, sadly, was.

Richard Hallman never got to play college football like his cousin, current UF starting quarterback Treon Harris. That’s because earlier this year, the 16-year-old Hallman was shot and killed in Miami’s Overtown section. Two other teenagers have been charged in his death.

“I watched [Hallman] grow up,” said O’Neal, who uses the tag L.E.O. for his street art. “I wanted to paint something that related to Treon and to Overtown. It [the murder] happened in my neighborhood and took a huge toll on everyone there.”

O’Neal’s mural is one of eight recently added to the downtown streetscape by internationally known artists as part of 352walls/The Gainesville Urban Art Initiative. The last of the artists finished up work on Thanksgiving morning, leaving Gainesville’s downtown area more visibly appealing than ever.

The “museum of the streets” will be one of the highlights of tonight’s monthly Artwalk, which includes more than a dozen galleries and art spaces in and around the downtown area. Five of the murals, including O’Neal’s, are visible within a block of Lot 10, at Southwest 1st Avenue and 2nd Street.

The mural project was the brainchild of Iryna Kanishcheva, a Ukraine native and current Gainesville resident. She organized the artists and secured the walls for them to work on.

“I tried to choose artists with the most different styles and techniques,” said Kanishcheva, a professional photographer who has chronicled street art around the world. “These are artists who are all young and do the best work. They are all relevant.”

All of the artists left indelible marks on the city. Some painted images that relate specifically to the area, while others chose more general images to grace the walls and buildings. One mural, by Filio Galvez and Andrew Antonaccio, is an abstract work adorning the wall on the east side of Héctor Framing & Gallery, at 702 W. University Ave.

“What the project did was bring internationally renowned urban artists to Gainesville,” said store owner Héctor Puig, “That’s going to draw attention from all their followers and bring Gainesville notoriety.”

Galvez and Antonaccio, known collectively as 2Alas, collaborated on the Héctor Gallery wall as they have done with outdoor murals in Canada, Puerto Rico, Italy and South Florida. Their work is a black and white, zebra-like linear portrait that fools the eye until viewed from a distance, when the repeating images come into focus.

“I was more than thrilled,” Puig said. “I couldn’t have asked for anything better.”

Galvez said he and his mural partner had never been to Gainesville before and didn’t know what to expect. He said the biggest challenge they faced was a wall much longer than ones they had previously worked on.

“We were super pleased to do a mural here,” Galvez said before he and Antonaccio returned to their Miami homes. “Everyone here was so receptive and friendly to us, especially in the neighborhood.”

Miami street artist Axel Void, whose murals grace more than a dozen European cities, painted a postcard view of downtown Gainesville on the wall adjacent to The Bull. The image was reproduced from a photograph he took looking east from the top floor of the Southwest Parking Garage.

“Street art is a movement in many large cities,” said Void, who was born in Miami and raised in Spain. “Gainesville is not a large city, but the murals will invite people to come here. It’s a positive sign.”

At the top of one wall, he chose to include a portrait of Jane Jacobs, who Gaia calls “the preeminent theorist for new urbanism.” Her strategies, outlined in her book “The Death and Life of Great American Cities,” have been implemented in many U.S. cities.

Although Gaia had never visited the city, he Googled “Gainesville gentrification” soon after being invited to participate in 352walls.

“My approach is to make my murals placed-based, or relevant to the area,” he said, calling it a “reinvestment strategy.”

That strategy included a portrait of A. Quinn Jones, the first principal of Lincoln High School, which was once Gainesville’s all-black high school. Under Jones, Lincoln High became the second fully accredited African-American high school in Florida almost a century ago.

Gaia’s mural, which extends around the corner of the parking garage, also includes images of an orange blossom, the nearby Porters community, old Union Academy, Chief Osceola, Union Street Station, the Continuum condos and even an everyday jogger.

“I want the mural to create a framework that will stand as a testament to this moment in time,” Gaia said.

Funding for the 352walls project was provided by Visit Gainesville, the Gainesville-Alachua County Art in Public Places Trust and the Gainesville Community Redevelopment Agency with coordination from the City of Gainesville Parks, Recreation and Cultural Affairs Department.

“Every city can afford this kind of project, but not every city will accept it like Gainesville has,” Kanishcheva said. “I think it’s because Gainesville is a young, open-minded city.”

She added that the 352walls project is far from over. In January, two more walls will be painted—one next to Market Street Pub by the Ukraine duo known as Interesni Kazki and another by Alexis Diaz from Miami on a wall yet to be determined. In February, street artist Add Fuel from Portugal will paint between 10 and 15 street-level transformer boxes in the downtown area.

Russell Etling, the city’s Cultural Affairs manager, said the community is indebted to Kanishcheva for her 352walls curating efforts.

“She had a vision for how urban art, particularly murals, could change cities,” he said. “She was dogged in finding the support to make it happen. We are grateful for a private citizen coming to the city and county to help improve the quality of life of all our residents and visitors.”

As for O’Neal, the street artist who painted the mural of Richard Hallman, he returned to Miami before he could share his work with Treon Harris, whose Gators are playing Alabama for the SEC championship this weekend in Atlanta.

“I texted him. I told him I had something to show him but didn’t say what it was,” O’Neal said. “I sent him a picture of me with the sketches but blurred out his cousin. I hope he likes it. It was done for his family and [UF wide receiver] Antonio Callaway.”

For more photographs and an overview of the project, visit Iryna Kanishcheva’s Gainesville Urban Art  website.

A gallery of photos, showing the work of each artist from 352walls, is below: