The Actors’ Warehouse presents Anna Ziegler’s disturbing one-act drama about a boy who is raised as a girl because of a physical deformity only to eventually discover the painful truth.

Such is the case in the stage production Boy, debuting this week at the Actors’ Warehouse, 619 NE 1st St. Opening Night is Friday at 8. There are additional performances Saturday night at 8 and Sunday at 2 p.m. followed by four performances a week through Nov. 4.

Inspired by a true story, Boy is the heartbreaking saga of a boy raised as a girl following a botched circumcision as an infant. The boy’s naive parents, on the recommendation of a seemingly well-intentioned but misguided doctor, reluctantly agree to the experiment until, well, nature takes its course.

“It’s really about the old question of nature versus nurture,” said director Ann Kinnebrew. “Now we have such an expanded understanding of gender identity and development.”

More than 50 years ago, however, medical experts were still debating whether a person’s upbringing and environmental factors could supplant genetic factors in determining adult behavior and personality traits.

In Boy, parents Doug and Trudy Turner (played by Jorge DeJesus and Paula Ambroso) give birth to twin boys. They name one of the boys Samuel until a medical procedure mangles his penis. The traumatized parents seek advice from Dr. Wendell Barnes (Bradley T. Hicks), who all but insists that young Sam be raised as a girl, Samantha, and everything will turn out fine and dandy once gender-reassignment surgery takes place.

“I think Dr. Barnes is absolutely sure that he’s right about everything he’s ever said or done,” Hicks said. “He’s at the top of his field. He’s found something — sexual reassignment — he can be an expert in.”

Hicks directed The Effect earlier this year at the Actors’ Warehouse. That play was about a clinical drug trial that backfires. In that production, DeJesus played a cocky drug developer. In Boy, DeJesus goes to the other extreme to play a distraught father.

“He’s a man in over his head,” DeJesus said. “Every doctor and every academician he’s ever encountered has screwed him over. He’s incredulous, but he tries anyway.”

Ambroso, making her Actors’ Warehouse acting debut, is a mother of three children who empathizes with her character.

“I think Trudy, like any mother, wants her baby to grow up with a normal childhood,” Ambroso said. “She’s doing the best she can to find the best solution to a horrible tragedy. As a mother, I can’t imagine something more awful.”

At the center of Boy is Sam/Samantha/Adam, played with appropriate innocence and later understandable fury by Taylor Lawrence, making his Actors’ Warehouse debut. Lawrence, 19, a Buchholz High graduate, said he didn’t realize what he was getting into when he auditioned for the role.

“I saw the auditions listed on their website,” Lawrence said. “I thought, ‘It’s called Boy, so they need a boy, and I’m a boy.’ I really had no idea what I was auditioning for.”

In flashback scenes, Lawrence plays young Samantha during therapy sessions with Dr. Barnes. The psychologist is hellbent on steering the child toward girlhood. At one point, the conversation turns to the movie Star Wars.

“No!” Samantha responds with youthful contempt. “I want to be Luke Skywalker.”

Much to Dr. Barnes’ dismay, his patient’s gender-identity crisis only intensifies when Samantha reaches adolescence and transitions to Adam (rather than Samuel). The awkwardness hits a crescendo when, in his early 20s, Adam develops feelings for girl-next-door Jenny (Cristin Donaldson) but is too ashamed to reveal his secret to her.

Donaldson, 18, is also making her Actors’ Warehouse debut. She is a UF freshman from Fort Pierce majoring in theater and psychology.

Boy is based on the tragic real-life story of David Peter Reimer, a Canadian man who ended his own life in 2004 after decades of torment related to his gender-identity issues. In her play, Ziegler touches on but doesn’t dwell on her protagonist’s mental-health issues.

When Actors’ Warehouse artistic director Steven H. Butler asked Kinnebrew to direct Boy, she was up to the task. Kinnebrew is executive director of Ignite Applied Theatre, which uses theater-based activities to promote deep connection, communication and collaboration within the community.

“I’ve done work with the transgender community, and their issues are close to my heart,” Kinnebrew said. “The transgender population makes up only about 700,000 people in the U.S., but it is the most marginalized with the highest suicide rate of any minority group.”

Kinnebrew, who points out that Boy is a gender-identity play and not a transgender play, recently directed No Roosters in the Desert at various Gainesville venues. That play follows the plight of four women who cross the U.S.-Mexico border at great peril and sacrifice.

As with No Roosters in the Desert,  there will be community learning exchanges following each Sunday matinee performance of Boy.

As a community engagement specialist, Kinnebrew has developed several ways for the audience to grapple with the question of gender identity. Through interactive lobby displays and the three matinee learning exchanges, facilitated by narrative specialist Dr. Syraj Syed, many ideas and reflections will be shared.

“I would love for audiences to have a better understanding of gender issues with our youth and a better window for parents,” Kinnebrew said.

Hicks said the whole point of Boy can be summed up in just a few words.

“We shouldn’t mess with who a person is,” he said. 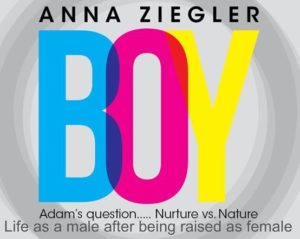 Let us know what you think about Boy by posting a comment in the Leave a Reply section below.