For the next four weekends, the Acrosstown Repertory Theatre presents one of William Shakespeare’s “problem plays” during its Summer Shakes series. Despite the subject matter, be prepared to laugh!

Othello will just have to wait.

That’s what Carolyne Salt, president of the Acrosstown Repertory Theatre, decided last fall when the news cycle dictated that she steer away from scheduling the tragedy as its Summer Shakespeare production in lieu of a play more reflective of these rather strange and tumultuous political times.

“I had originally chosen to do Othello this year, but suddenly, around October, everything I saw in the news — from the presidency, to increasing hypocrisy on the far ends of the political spectrum, to the #metoo movement — started reminding me of Measure for Measure,” she said.

“I dove back into it, and was struck by two things — how little the world had changed in over 400 years and how downright funny the show was. As the world spiraled into chaos and despair, I took comfort in Shakespeare, in the similarities he saw in the world and especially how he was able to bring out the humor in otherwise dark subject matter.”

And, so, the Acrosstown Repertory Theatre will present Measure for Measure — not Othello — beginning this week. Opening Night is Friday at 8. There are also performances Saturday at 8 p.m. and Sunday at 2 p.m. and four shows a week to follow through July 29.

In Measure for Measure, Duke Vincentio (Jesse Vale) leaves Angelo (Michael Glover) in charge of Vienna as he pretends to leave town on a mission. Instead, he disguises himself as a friar walking unseen among his people. Meanwhile, Angelo takes his new role quite seriously — not unlike a certain current U.S. Attorney General — and quickly enforces the letter of the law, closing all brothels and condemning the honorable Claudio (Alex Barba) to death for getting his fiance pregnant.

Enter Claudio’s sister, Isabella (Andrea Young), who intervenes on his behalf only to find herself with an ultimatum: give up her chastity to Angelo or see her brother executed. Meanwhile, the Duke manipulates everyone while teaching a few lessons about mercy in the process.

And, after all that mayhem, the play is still considered a comedy!

Actually, Measure for Measure is considered one of Shakespeare’s “problem plays.” According to Salt, who is directing the play, a critic coined that term in the late 1800s to describe those of Shakespeare’s comedies that make social commentary and delve into darker topics.

“Some call them tragicomedies, but I think Shakespeare honestly meant them to be funny, and this one truly is,” she said. “How do you address topics like hypocrisy in the Christian conservative movement or the role of power imbalance in sexual harassment while respecting the importance of those topics and making people laugh?

“Most directors, I think, don’t even try; those that do often err on the side of tragedy. But this is, first and foremost, a comedy and reminds us that we can, indeed, find humor in dark days, even as it gives us food for thought.”

Michael Glover performed on the ART stage most recently as Garcin in No Exit and as Elijah in Trailer Park Elegy. Both were conflicted characters. His Angelo in Measure for Measure, however, is simply afflicted.

“I’m the bad guy. Some of the things I say, you can imagine what Harvey Weinstein said,” Glover said, referring to the disgraced Hollywood mogul who allegedly made a few indecent proposals of his own.

“I hope people don’t like me [as Angelo], but I also hope there are moments when they do like me. It’s not interesting as a villain to just stand there and twirl your mustache.”

Glover said Measure for Measure is his first attempt at performing Shakespeare. He refers to the Bard as “the Steven Spielberg of his day” because his work appealed to the masses.

“Shakespeare is sort of out of my wheelhouse, but it’s something I’ve wanted to cross off my bucket list,” Glover said. “It’s definitely been challenging. It’s almost like interpreting Chinese to make it sound natural.”

Jesse Vale clearly has the biggest challenge in Measure for Measure. Of the nearly 2,600 lines spoken in the play, the Duke delivers about 800 of them.

“This is just my third play since college,” said Vale, who performed as Riff Raff in The Rocky Horror Show last fall at the ART and, more recently, as Arthur in I Love You, You’re Perfect, Now Change at the Gainesville Community Playhouse. “Carolyne invited me to the audition, but I’ve been very interested in doing a Shakespeare play for a very long time.”

Vale said his Duke Vincentio character considers himself to be a kind and virtuous man, but he’s also quite manipulative.

“I came up with a nickname for him: Duke Ex Machina,” Vale said. “He swoops down and gives people a way to prevail over Angelo. … Above all, he’s accountable for his actions. He’s manipulative, yes, but he’s not a troll.”

Meanwhile, Andrea Young (Isabella) is one actor who has performed in a number of Shakespeare plays and considers herself “a Shakespeare nerd.” She’s done Twelfth Night twice in Chicago and many other Bard plays while attending Wright State University in Ohio. She made her Gainesville acting debut at the ART this spring as the fortune teller in Thornton Wilder’s The Skin of Our Teeth.

As Isabella, her saintly character must decide whether to give up her virginity to Angelo or see her brother put to death for the same crime — fornicating out of wedlock.

“She has a choice to make,” Young said. “Some people today might not think it’s a difficult one, but if she goes through with it, she believes she’ll condemn her soul for all eternity. The situation is ridiculous because she is so chaste and devout, you have to think about it.”

Salt said the Acrosstwon Repertory Theatre’s Summer Shakes program furthers the nonprofit theater’s mission in terms of challenging itself artistically and technically, as well as challenging audiences to think more and feel more.

“It’s important to me and, I believe, the greater Gainesville area because there is a timelessness in Shakespeare’s works,” she said. “They touch upon archetypes and eternal truths, speak to us in deep and meaningful ways about what it means to be human, and remind us that ‘the more things change, the more they stay the same.’

“Great art is a reflection of life and of the human condition, and Shakes is great art.” 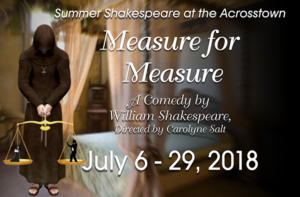