The Actors’ Warehouse begins its 2017-18 season this week with a drama by Octavio Solis that looks at a Latino man and woman facing their worst fears about becoming parents.

In the opening scene of Se Llama Cristina, a man and a woman wake up in a trash-strewn apartment oblivious to who they are or how they got there. There’s drug paraphernalia on the coffee table and, of all things, a fried chicken leg in an otherwise empty crib.

This could be the set-up for an outrageous comedy (The Hangover maybe) or a horror thriller (Saw perhaps), but playwright Octavio Solis goes down an even more surreal path. He’s crafted a drama in which the two heavily flawed main characters piece together their haunting memories and try to determine whether they can become worthy parents.

“The whole play is about them going back and remembering their pain,” said director Kathy Byrne. “The theme is about letting go of the past so that you can have a future.”

The Actors’ Warehouse, 619 NE 1st St., is presenting the Southeastern premiere of Se Llama Cristina as its first production of its sixth season. The play’s Opening Night is Friday at 8. There are also performances this weekend on Saturday at 8 p.m. and Sunday at 3 p.m.

The production continues through Oct. 8 with four shows a week. Tickets are $20 ($15 for students and seniors). For further info, visit the Actors’ Warehouse website.

The theater is staging Se Llama Cristina as part of Hispanic Heritage Month (Sept. 15-Oct. 15). Solis, one of the most prominent Latino playwrights in the U.S., was born in Texas to Mexican parents. He has written more than 20 plays, most of which address issues unique to Mexican-Americans.

In Se Llama Cristina, the two main characters are Mexican-Americans and played by Hispanic actors. Jorge DeJesus, who plays Man (later known as Miguel/Mike/Miki), is of Puerto Rican descent. Karina Kolb, who plays Woman (later Vespa/Vesta/Vera), has a Cuban-born mother.

“A contemporary Latino playwright is rare,” Kolb said. “You don’t often see plays like this in community theater. It’s specific to the Mexican-American experience.”

The production also features Tom Miller as Abel, an ill-tempered telephone lineman who likes to tell it like it is, and Julia Diven as Girl, a precocious teenager whose monologue toward the end of the play helps put everything in perspective.

Se Llama Cristina weaves elements of magic realism that give the main characters many layers that are slowly stripped away.

“These two people are so damaged,” said DeJesus, who most recently performed in These Shining Lives at the Acrosstown Repertory Theatre. “She’s been abused by her father and has had one bad lover after another. Miguel is the bastard son of 100 men. He has no idea who his father is.”

Miller, who most recently wrote the play UMMU at the Acrosstown, said that Se Llama Cristina can be appreciated on many levels.

“On the surface, it’s a very straight-forward story about the fear of bringing a child into the world,” he said. “But there are layers which, if the audience dares explore, are as endless as a fractal and as deep as an ocean. This play functions directly, symbolically, visually and poetically.”

“It may be that Abel is a composite fear in the imaginations of the strung-out principle characters,” he said. “Abel may be the father of a child, but maybe not. He may be the father of his wife, or the boyfriend of her daughter. It may be that Abel, as dark and reprehensible as he is, is the secret hero even as he is the villain. Abel is the telephone man. He is here to repair the lines. Abel is a shadow.”

To understand the play better, Byrne and her cast recently had a two-hour Skype session with the playwright.

“We got to pick his brain about the characters — it was very cool,” Kolb said. “Everybody was able to gain a little more insight into their characters and to explain the stranger, symbolic stuff. We gave him some theories and he sort of confirmed them.”

It so happens that Byrne and Solis were classmates in the MFA program at Trinity University in Texas in the early ’80s. Their program was conducted at the Dallas Theater Center under the tutelage of its founder, Paul Baker.

“Baker believed that each artist needs to find the God within him/herself that makes our work truly unique,” Byrne said. “Octavio’s and my training was very collaborative, and that’s the way I direct. I also get to collaborate with my old friend through his beautiful poetic words and story.”

Byrne and Solis both also did intensive studies — but not together — at the Dallas Institute of Humanities and Culture, where Byrne said she learned to read deeply and understand the profound influence of myth, symbolism and archetypes on the human psyche.

Two years ago, Byrne directed another Solis play, Lydia, at the Acrosstown.

“Directing Octavio’s plays is like taking a journey into the depths of the subconscious,” she said. 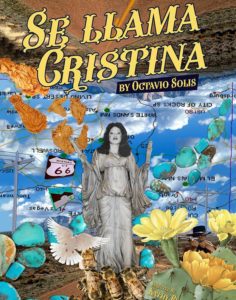