Steve Howell, an award-winning potter from Gainesville, will be one of about 220 artists displaying their fine arts and fine crafts this weekend during the 48th annual show along tree-shaded Northeast 1st Street.

Every year for the past 25 years, friends and acquaintances of Steve Howell have known just where to find him the first weekend in April. The potter hangs out along Northeast 1st Street, only a few blocks from his home in Gainesville’s Duckpond neighborhood.

That shaded spot is where Howell has a booth during the Santa Fe College Spring Arts Festival, and it’s where you can expect to find him again this weekend when the art show celebrates its 48th year.

“This is my community and I quite appreciate the opportunity to participate and support the local arts community,” said Howell, who actually began displaying his work at the Spring Arts Festival in 1985 when he still lived in DeLand.

Howell will be one of 220 regional and national artists showcasing their work in downtown Gainesville this weekend. The hours are Saturday 9 a.m.-5:30 p.m. and Sunday noon-5 p.m. Admission is free. In addition to paintings and sculptures, the show will include jewelry, ceramics, fiber arts, glass, wood, photography, print making, graphics and digital art.

Although all artists’ booths will be situated along Northeast 1st Street between 2nd and 8th avenues, there will be entertainment stages and other ongoing activities into the evening at Bo Diddley Plaza and on the grounds of the Historic Thomas Center. (For a complete schedule and a list of artists, visit the Santa Fe Spring Arts Festival website.)

This year’s Spring Arts Festival has a new director in Raul Villarreal, coordinator of Cultural Programs at SFC. He takes over for longtime festival director Kathryn Lehman, who has a new position as the college’s director of Grants and Projects. 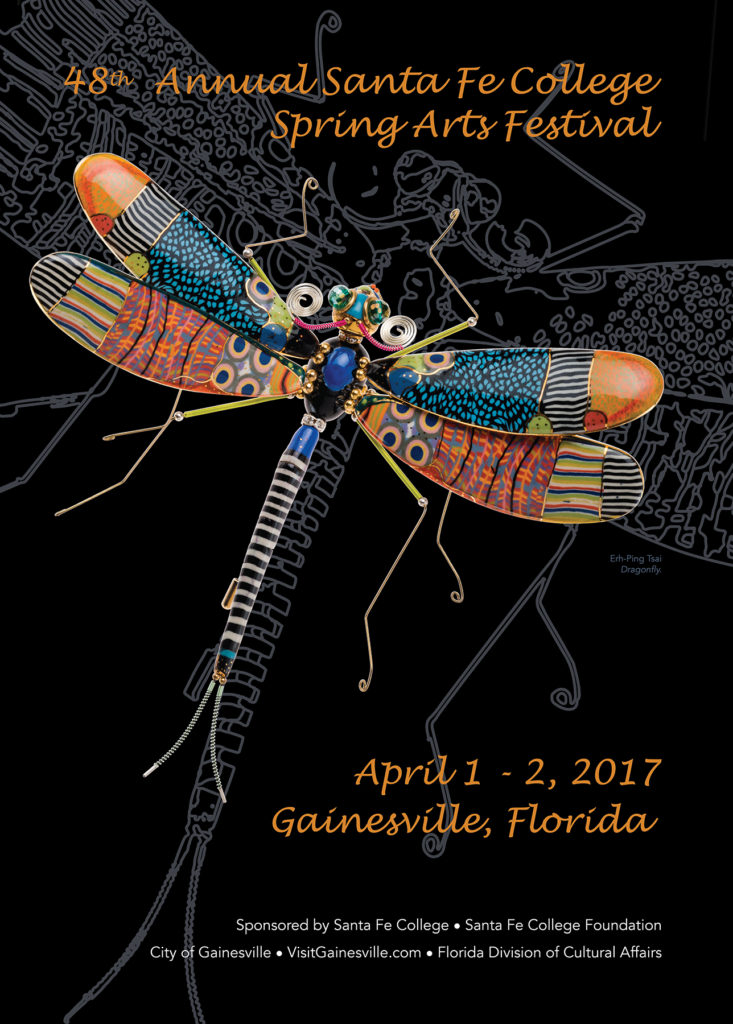 Villarreal, a visual/graphics artist himself who moved to Gainesville two years ago, has spent the past 15 years as an organizer and curator for museums, arts centers and commercial galleries in the New Jersey area.

“An arts festival is a whole different aspect of exhibit art with different dynamics, but I approach it the same way,” Villarreal said. “The primary focus is that the artists are taken care of and well represented. You let them know that the show is about them.”

Villarreal said there will be fewer artists at this year’s Spring Arts Festival, partly due to changes in the downtown landscape but also for the benefit of artists.

“We decided to make it a little smaller so as not to overwhelm the spectators,” he said. “Hopefully they will get to spend more quality time with each artist.”

Villarreal’s efforts are already getting praise from at least one artist.

“I had a great relationship with Kathy Lehman,” Howell said. “She went out of her way to make sure that the artists were taken care of. What I see so far from Raul, I like very much. I like him as a person, I like his ideas for the show moving forward, and I respect him as an artist.”

One bold move that Villarreal has taken is choosing a poster artist from outside Gainesville. Outside Florida even.

The 2017 festival poster features a brilliantly colored dragonfly displayed on a black background created by Erh-Ping Tsai, a New York-based jeweler from Taiwan.

Tsai and his wife, Cynthia Chuang, create one-of-a-kind jewelry pieces that he describes as “wearable art.” He displayed the dragonfly at last year’s show. The Santa Fe College Foundation purchased it for permanent display at its Spring Arts House, 636 NE 1st St.

“I thought it was an amazing piece of art,” said Villarreal, who designed the poster himself. “It is a departure from tradition, but the reaction to the poster has been fantastic.”

Meanwhile, Howell has been busy at his studio in the Northeast Industrial Park putting the finishing touches on works that he will display at his booth this weekend.

“Everything’s on schedule, but I’m working down to the wire,” he said.

Although Howell specializes in functional earthenware ceramics, he has decided to display only his woven copper “vessels” with ceramic bases at the Santa Fe College Spring Arts Festival. He explained that the intricate copper work is all based on the Medieval idea of the reliquary, or a container for relics.

Whatever the medium, however, Howell wants to be known simply as a potter.

“All my work is based on the vessel,” he said. “It all goes back to thinking about the container and the space that container occupies.”

Howell, 67, said he is happy to report that he has been a full-time studio potter since 1982.

“I’m proud of that,” he said. “It shows that if you have the right mix of idealism and practicality, you can make a living at it.

“It’s hard work. It’s a job. We all have our transcendental days, but most of the time it’s just work.”

Howell purposely works from a studio instead of out of his home to avoid distractions. His studio is located on Northeast 19th Drive next door to mechanics, auto body shops and warehouses.

“I’ve been here so long, I’m just another working stiff on the block,” he said.

Howell once did as many as 18 art shows a year across the U.S. Now he stays closer to home, limiting himself to about eight shows a year, including the Downtown Gainesville Festival and Art Show each fall and the Santa Fe Art Festival each spring. He has won numerous awards, including Best of 3D and Best of Show.

Villarreal, meanwhile, is ready to welcome all artists with open arms. After all, he is also an artist. He has had 20 one-person shows and taken part in more than 400 group exhibitions in the U.S., Spain, France, Italy and China during the past three decades.

Santa Fe College hired him in 2014 as an adjunct professor. Villarreal, 52, is currently organizing an exhibition of 30 U.S.-based artists in Havana, Cuba, for 2019. His book, “Hemingway’s Cuban Son,” is based on his father’s memoirs of his friendship with Nobel Prize-winning American author Ernest Hemingway.

Villarreal was co-coordinator of the Santa Fe Spring Arts Festival last year when Saturday’s festivities were canceled due to rain.

“Fortunately, on Sunday we had perfect weather and a great turnout, and many of the artists were able to make up for their lost sales,” he said.

This weekend’s weather forecast calls for mostly sunny skies with high temperatures near 90.