The newest restaurant in downtown Gainesville is hoping that late-night partiers will have a huge appetite for comfort food once the bar scene closes down.

Three once-vacant storefronts on Southwest 2nd Street, in the shadow of the city parking garage, are coming alive this month, doubling the number of eating and/or drinking establishments on the block. 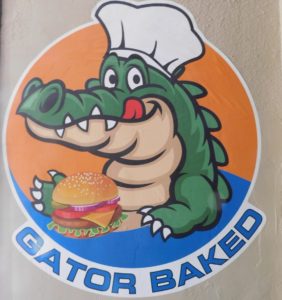 Last week was the grand opening of the FishHawk Spirits Distillery Tasting Room at 21 SW 2nd St. Although not a formal bar, customers can sample rum, vodka, whiskey and other products made by the distillery and then purchase bottles and other merchandise.

“FishHawk Spirits is very excited to part of the growth on the near west side of downtown Gainesville,” said David Molyneaux, CEO of the Ocala-based distillery. “Our distillery tasting room will add a new dimension to the area.”

Next door, at 15 SW 2nd St., the husband-and-wife team of Romain and Sita Challandes are converting the old Motor Room dance club into a French bistro called Alpin. They hope to open within a few weeks.

And this week, at 12 SW 2nd St., is the soft opening for Gator Baked, a late-night carry-out and delivery food service that has set up shop in the former Infinity Lounge hookah bar.

Following in the tradition of Flaco’s Cuban Bakery a block away — but with a different menu — Gator Baked is geared toward the late-night college crowd emptying out of the bars.

“We provide food when there is no more booze,” said Erik Glenn, one of the Orlando-based owners of Gator Baked along with Curt Lentz.

Glenn, 22, calls the concept a “diner/bakery fusion” that does comfort food until 3 a.m., or an hour after all the downtown bars and clubs close for the night. The eatery will open most days by 3 p.m.

The extensive Gator Baked menu includes burgers, panini, pulled pork sandwiches, wraps and chicken and waffles. Customers can also choose from fresh-baked dessert items such as brownies, cookies and specialty doughnuts, including cronuts (a croissant/doughnut hybrid). Although no alcohol is available at Gator Baked, chocolate milk is on the menu along with soft drinks.

Gator Baked has a dining room for those who want to order from the counter and sit in. However, Glenn expects the business to also have a thriving free-delivery service that will take orders to the UF campus and everywhere in between.

“I don’t think there’s anyone who does quite what we do,” Glenn said.

Cowboys Saloon, located on the same block, already has agreed to use Gator Baked as its food service.

The long, narrow building in which Gator Baked is located has housed a number of businesses over the years, including a strip club.

“When we took over this building, it was out of code 100 percent,” Glenn said.

Gator Baked will have its grand opening on Monday. In the meantime, customers can check out gatorbaked.com or like them on Facebook. The phone number is 352.792.6505.

Across the street, the FishHawk Spirits Distillery Tasting Room already has a number of downtown establishments featuring its products.

“Patrons can enjoy the spirits at these local establishments or come by our place and experience the farm-to-bottle ultra-premium spirits story,” Molyneaux said. “In addition, patrons can purchase bottled spirits directly from us as the distiller as well as branded retail merchandise.”

Meanwhile, Romain Challandes and his wife — both from Geneva, Switzerland — have gutted the former Motor Room to create Alpin. When open, the establishment will feature a full range of imported wines and beers.

The bistro menu will include crepes, quiches and croque monsieur, a type of grilled ham and cheese sandwich popular in French cafes.

Like its predecessors at the address, Alpin will also have an outdoor patio where customers can enjoy fresh air.