Lawrence Clay is bringing a taste of California to downtown Gainesville with the opening this weekend of Elixir Lounge and Juice Bar in Union Street Station.

Looking for something new and different in downtown Gainesville? Look no further than Elixir Lounge and Juice Bar, opening this weekend at 201 SE 2nd Ave., Suite 109 (behind Starbucks).

In the afternoon and evening, Elixir will offer patrons an extensive list of beers and wines along with appetizers such as beef taquitos and pizza strips. A full liquor bar will be available in August.

Owner Lawrence Clay has scheduled a “Quiet Opening” for Saturday at 9 p.m., featuring $2 drafts and bottles and other drink specials. There will also be free food and other giveaways throughout the night to introduce Gainesville to the new concept. Hogtown Slayers will provide live music.

“The headline should read, ‘Hollywood Takes Gainesville By Storm!'” said Clay, a promotor and consultant who splits his time between Tinseltown and Hogtown. “I really want Elixir to be the ‘it’ thing downtown.”

Although Clay expects Elixir to appeal to all ages, he is targeting the college demographic, particularly the Greek community and its ability to network and create a buzz. The goal is to pull in business from the UF campus, Santa Fe College and beyond.

“The college kids don’t have a tendency to come downtown, but I’m gonna change that,” Clay said.

To do so, Clay has created an atmosphere that is bright, cheerful and inviting only a few steps from the Hippodrome Theatre and across the street from Sun Center East.

Elixir features a custom-made bar and high rectangular tables created by Alexis Dold, owner of Studio Circle Square in Gainesville. The bar and tabletops have pieces of scrap wood arranged in swirl patterns and set in black and clear epoxy.

Dold’s influences were “The Starry Night” by Vincent van Gogh and the works of Japanese artist and printmaker Katsushika Hokusai.

“I wanted the design to look effortless,” Dold said.

“When you walk into my space, there is an elegant feel,” Clay said.

In addition to the main floor, there is a large loft space that can be used for private gatherings or overflow crowds.

Clay explained that he chose the bar’s name because an elixir is a concoction of liquids intended to cure one’s ills. Both the alcoholic and non-alcoholic “potions” at Elixir will serve that purpose.

Elixir will have an extensive menu of protein shakes and fruit smoothies, with such names as Caribbean Storm (mango, coconut, banana and yogurt) and Key Lime Pie (lime, lemon, pineapple, orange and Energy Boost). Each shake and smoothie is $5.50, but customers can also choose from 20 wellness elements for an additional charge.

On the alcohol side, Elixir will offer eight beers on tap, including locally crafted brews from Swamp Head Brewery. There will also be a selection of more than 40 foreign and domestic IPAs, porters, lagers and ales as well as a wine list.

Later this summer, an international cocktail menu will include more than 100 drinks. Also, there will be a happy hour seven days a week from 4-7 p.m.

“This is a different vibe than a lot of the other bars downtown,” said Ryan Roth, Elixir’s interim manager. “It’s a cool place to come with a group of friends and hang out.”

To create that vibe, Clay is recruiting employees based not only on their work ethic but also on their people skills. In other words, he wants to hire people with the ability to attract business.

“If you’re going to build your field of dreams, you have to make sure you have people who contribute to the bottom line,” he said. “A bartender on a Tuesday night has to have his or her 20 people and get them to show up.”

That is one reason the built-in networking of UF fraternities and sororities is critical to Elixir’s success.

“If we don’t have a line down the street, we’re not doing our job,” he said.

But he also wants Elixir to become that place in downtown Gainesville where customers young and old are known by their names.

Clay, 43, grew up in California and attended Humboldt State University north of the San Francisco Bay Area. When a classmate of his entered a graduate program at UF, Clay tagged along and started dividing his time between California and Gainesville.

Although Elixir will be Clay’s first business in Florida, he has been a consultant and promotor for a number of bars and nightclubs in San Jose and San Francisco.

“I was very good at it,” he said. “I’m a people person and a great networker.”

However, the acai bowls are probably Elixir’s most distinct import from the west coast. The acai is a berry derived from the South America acai palm. Many nutrition experts consider the vegan-friendly acai a “super fruit” because of its antioxidents, fiber and heart-healthy fats. 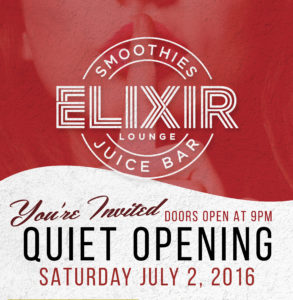 An acai bowl is an acai puree/sorbet topped with oatmeal or granola and a variety of fruits and berries. The Huffington Post recently touted the acai bowl as the “world’s best healthy breakfast.”

“It’s a trend on the west coast that people are following,” Clay said.

In Gainesville, acai bowls are currently available at 3 Natives at 1023 W. University Ave.

Roth, a UF senior in philosophy and business, said it is easy to buy into the concept that Clay is creating with Elixir.

“Lawrence wants this to be a place where everyone can feel comfortable,” he said. “He wants to make it a home for people.”

Added Clay, “It’s not about what you spend; it’s about how you feel about your experience.