Two world-famous artists from Ukraine have left their mark on downtown Gainesville in the form of a whimsical and evocative mural on the east side of Market Street Pub & Cabaret.

Just when you thought the 352walls/Urban Art Initiative mural project in downtown Gainesville couldn’t get any better, along come Vladimir Manzhos and Aleksei Bordusov to blow you away.

The Ukrainian duo, known collectively in the urban-art world as Interesni Kazki, completed their huge mural on the wall of Market Street Pub & Cabaret last week. It is a surreal, dreamlike masterpiece that will leave people gawking and talking for years to come.

To the casual observer, the mural is a montage of seemingly unrelated images. Look closely, however, and the elements include everything from a flaming eyeball and a floating brain to a buzzing insect and a tropical bird.

Then, of course, there’s a Gator in a business suit climbing stairs to deliver musical notes to the ear of man with an out-of-control Fu Manchu mustache. Not to mention the monkey head on top of a box that resembles a temple with a wagging gator tale protruding from its front entrance. Oh, yes, and the hourglass with legs that seems to represent humans running out of time.

The mural facing Southwest 1st Street near 1st Avenue is up for interpretation, but one of the artists involved said there is a story to the madness. “My part of the story is about the five [traditional] human senses and the sixth sense of intuition,” said Bordusov, speaking with a thick Russian accent. “That [sixth sense] is what makes humans different from animals.”

So you could say the mural suggests that the evolution from apes to humans can be connected.

“The flaming eyeball is like a third eye—a symbol of intuition maybe,” he said.

The two artists are a team but work independently on different sides of their murals. In this case, Manzhos, 34, painted the left side of the Market Street Pub mural (the section with the human hourglass and monkey-headed box). Bordusov, 35, painted the right side (with the steps leading up to the man’s large head).

The muralists start with a general idea but then, like good storytellers, let their imaginations take over.

“We don’t realize the final concept of this at first because during the work we do a lot of improvisation,” Bordusov said. “But in general, each of us paints our own part of the mural. Then at the end of the work, we combine it into one story.”

In this case, the flaming eyeball connects the two sides of the mural. But it still raises questions.

“Every single piece … contains a secret to decipher,” Bordusov said.

In the man’s hollowed eye sockets sit a scantily clad man and a woman. Adam and Eve perhaps?

“No, it’s not connected to particular Bible story,” the artist insisted. 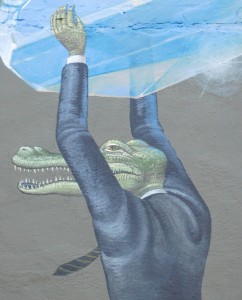 Ok, what about the suit-wearing alligator? A tribute to Gainesville and the University of Florida, no doubt?

“Maybe it’s a tribute to some local politician or businessman,” he said.

Iryna Kanishcheva, the 352walls coordinator, said people can interpret the massive artwork however they want to suit their beliefs. All she knows is that the mural is yet another beautiful addition to the downtown streetscape.

“Everybody says it is the best mural so far,” she said. “But I can’t say that one mural can be better than another because each one represents a different style and a different subject.”

Other international artists had invaded downtown Gainesville in November to paint murals on walls on the Southwest Parking Garage, Loosey’s, the Bull, the old Shadow Health offices, the Top restaurant, Hector Gallery and the Haven Hospice Attic/Rails-to-Trails wall. 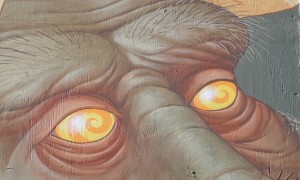 The Interesni Kazki duo of Bordusov (aka Aec) and Manzhos (aka WaOne) had a scheduling conflict, but vowed to paint their mural at the beginning of the year. That delay afforded Kanishcheva, also a Ukraine native, the opportunity to spend more time with her fellow countrymen during the recent two-week mural process.

“I am proud that these guys are from my country, from my hometown,” she said. “Those are my personal feelings, but I love all of the murals.”

The prolific muralists grew up in Kiev but didn’t meet and start working together until 15 years ago.

“We’re just friends and we paint all the time together. That’s why our styles are very similar,” Bordusov said.

Interesni Kazki, which translates into “interesting fairytale or story,” helped spearhead the urban-art movement in Eastern Europe. They have painted fantastical images around the world, in such places as Italy, Australia, France, Mexico, Los Angeles and New York. Their previous Florida work was on in Miami.

Where does the duo get their ideas from?

“It’s all based on our knowledge and our interests about different sciences, like paleontology, history, philosophy, cosmology, religion …” Bordusov said. “We like to discover everything.”

Bordusov has a degree in architecture but has never worked in that field.

“When I finished school, I started to paint murals in the city and abandoned my architectural occupation,” he said. 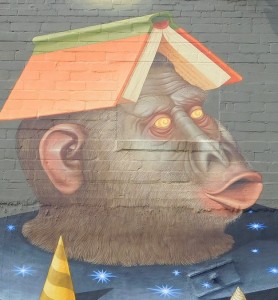 Kanishcheva pointed out that his contribution to architecture now is painting murals on older buildings to make them beautiful again.

The mural in downtown Gainesville is unlike any that Interesni Kazki has ever done.

“All murals are different, so this mural also has its own story,” Bordusov said.

The duo is used to the hustle and bustle of much larger cities. Bordusov laughed when he described Gainesville as being “very calm … but maybe too quiet.”

For more photographs of the Market Street Pub mural, scroll down to our gallery.