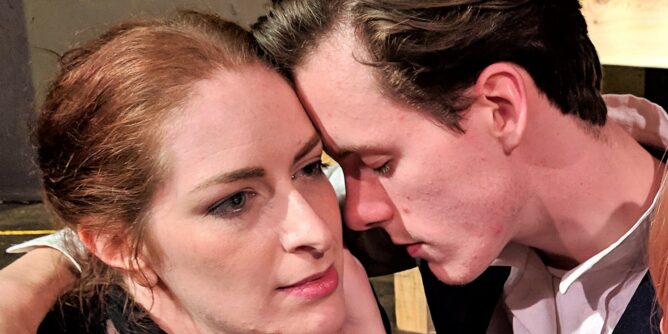 When the Acrosstown Repertory Theatre commences its three-week run of the drama Bloody Poetry on Friday night, director Jessica Jenkins will be thinking fondly about her late grandmother, Naomi Marrow.

Marrow, who passed away in 2016, owned Backstage Productions community theater in Williamsburg, Virginia, for nearly 20 years. The theater company was known for its free performances.

Not by coincidence, Bloody Poetry popped up on the Backstage calendar of shows every couple of years.

“My grandmother developed a passion for the show,” Jenkins said. “It’s really a heartbreaking play. The dialogue is just amazing. And when you see it, you want to do it!”

British playwright Howard Brenton once called his play, written in 1984, “the celebration of a magnificent failure.” The play explores the frustrated attempt by Percy Bysshe Shelley, Lord Byron and their significant others to live utopian lives outside their native England.

“It’s not exactly a love triangle — it’s a love square,” Jenkins said. “It’s complicated. There are so many emotions, all intertwined.”

To prepare for his role as Percy Bysshe Shelley, Devin Huchingson read Mary Shelley’s “Frankenstein” and then dived head-first into his character’s poetry.

“I found that the influence of his writing transcended time and space,” Huchingson said. “He influenced Gandhi; he influenced Dr. Martin Luther King. During this particular period of history [early 1800s], they started using their vocabulary and language to not beat around the bush but to say exactly what they meant.”

Huchingson, 21, last performed at the Acrosstown as Jack in Into the Woods. He’s also performed in other musicals in his native Lake City, but this is his first dramatic role.

“I’ve never done a historical character before,” Huchingson said. “Shelley’s words are now in my head all the time. This whole show is about a kind of haunting. Playing a real person really lets that person sink into your own life.”

In addition to being one of Lord Byron’s many lovers, Clairmont was Mary Shelley’s stepsister.

“She was kind of Mary’s shadow,” Grimm said. “She was a magnificent letter writer. Her letters revealed them to be monstrous people. They ruined her life.”

Grimm recently played in Time of My Life at Gainesville Community Playhouse and as Little Red Riding Hood in Into the Woods at the Acrosstown, But, like Huchingson, she can’t get her character in Bloody Poetry out of her head.

“We’ve all become very obsessed with our characters,” she said. “We’ve embodied them on and off the stage. They are fascinating, fascinating people.”

And that is why Jenkins, a Ph.D. student in archaeology at UF, pitched Bloody Poetry to the Acrosstown’s play-selection committee last year and offered to direct it.

“I saw it for the first time when I was probably 7 — a little too young to understand it — at the College of William & Mary,” Jenkins said. “Whenever my grandmother went to a play, she’d take me and my sister with her.”

In fact, under her grandmother’s directing, Jenkins performed in Bloody Poetry three times, at ages 17, 19 and 21. She played a different female character each time.

And now, Jenkins is directing Bloody Poetry in her grandmother’s memory.

“All of this is inspired by her,” she said. “Doing theater with her made me who I am. Being able to carry her passion and the play she loved to new communities is very meaningful for me.”

Then Jenkins added: “I probably should be working on my dissertation right now, but here I am. This is great!”

For further info, visit the Acrosstown Repertory Theatre website.
If you attend a performance, please let us know what you think by Leaving a Reply below.