The Gainesville performance artist caps a busy week by displaying his Magic Marker drawings at Hardback Cafe as part of the Holiday Artwalk.

Tom Miller is a busy guy.

Earlier this week, his newest play, Audience, debuted to a packed house at The SL8 Gallery in downtown Gainesville. On Wednesday night, he religiously emceed the Tabernacle of Hedonism at Hardback Cafe. And on Thursday night, he performed as the Pope, Satan, Doubting Thomas and a stockbroker in a stage reading of Shamrock McShane’s play, Holy Shit, at the Acrosstown Repertory Theatre.

And if all that wasn’t enough, Miller will be back at the Hardback tonight as featured artist during the monthly Artwalk Gainesville.

The holiday-themed Artwalk will take place at more than 20 downtown area galleries and art-minded businesses. Most venues will be open from 7-10 p.m., but a few will get an earlier start at 6. (The complete list of participating venues can be found at the end of this article.)

Many of the Artwalk stops will offer light refreshments and holiday treats. Some will offer live music. The self-guided tour is free.

At Hardback, now located at 920 NW 2nd St., Miller will display about 40 Magic Marker drawings and a few of his paintings. All will be available for sale.

“This is the first time I’ve ever priced myself so low so that people can own a piece of me,” he said with a laugh.

Miller said he is trying to raise money to attend his next 10-day residency in the David Lynch MFA screenwriter’s program at Maharishi University of Management in Iowa. The program is unique because it has a strong Transcendental Meditation (TM) consciousness component.

According to Miller, the TM aspect is the future of education.

“I’ve learned more in the first semester there than I have in my entire previous academic career,” he said. “I’ll do four residencies in Iowa and a final residency in Los Angeles. … We get to talk to David Lynch and really connect ourselves to our intuition and put our work immediately into action. And you don’t see that a lot of times.”

Miller said he was accepted into the program due, in part, to having finished writing Audience earlier this year. The 45-minute play centers around six characters sitting down to watch a stage performance in which the actual audience is the focus of their curiosity.

At Monday’s premiere, many of the 40 or so attendees doubled over with laughter at the witty dialogue, silly antics and overall cleverness of the play. Miller even chimed in on occasion by directing the play within a play using a “fleshlight” and megaphone as props.

“Audience is an avant-garde piece of guerrilla theater that is talking about reclaiming our humanity and respect for manners and the importance of storytelling to culture,” he said.

The play will be performed three more times over the next few days. It will take place on Saturday night as part of the Gainesville Homegrown Local Playwrights’ Showcase at the Acrosstown Repertory Theatre. Admission to the performance, which includes two other one-act plays, is only $5.

On Sunday and Monday at 8 p.m., Audience returns to the small theater space at The SL8, 10 E. University Ave. Tickets to each show are $12 if purchased online at ticketbud.com, $15 at the door (but seating is limited). Miller said there will likely be encore performances of Audience after the holidays and he has plans to make “a little movie” out of the piece.

Miller has been part of the Gainesville scene since 1984. His history as a performance artist is renowned. In recent years, he stared nonstop for three hours into the gaping mouth of Ted Cruz (which caught the attention of the Huffington Post) and spent a full afternoon and evening listening to every Eagles’ song ever recorded to determine whether the band sucked. (They didn’t.)

Then there  was the time he and friends erected — and later dismantled — an invisible sculpture titled “Nothing” in the middle of Bo Diddley Plaza.

“I actually didn’t take that down,” Miller confessed this week. “I left that sculpture up. I pretended to take it down. It’s still there. I just didn’t tell anybody.”

Shamrock McShane, who also arrived in Gainesville in 1984, has an appreciation for Miller’s body of work. 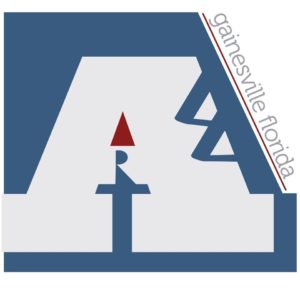 “Tom pushes the envelope — he takes art to the edge,” McShane said. “He’s the master of endurance comedy.”

Oh, and did we mention that Miller is bassist for The Threetles, the Gainesville-based Beatles tribute band that also includes Chuck Martin and Larry Thompson?

And Miller said he is not done performing in 2018. He will soon return to the Hardback for a potentially yawn-inducing feat.

“Before Christmas I’m going to read every falsehood that Donald Trump has uttered since becoming president,” he said. “It’s over 3,000 of them and will take me 38 hours to read nonstop. … All I’m going to do is read what he said, so nobody should be mad at me.”

And that is vintage Miller, McShane said.

“He’s the one and only Tom Miller, which is funny because there must be a million Tom Millers.”

Following is a list of participating venues for Friday night’s Holiday Artwalk and what to expect:

Civic Media Center (433 S. Main St.): Featuring Holidaze, artwork for sale by local artists. There will also be an Open Jam and Art Show until 2 a.m.

4Most Gallery (534 SW 4th Ave.): Presenting “The Border is Here,” a solo exhibition by Sandra de la Rosa, MFA candidate in Drawing and Painting at UF. She will exhibit a body of work about the U.S.-Mexico border. “It depicts a series of drawings that visualize some of the dynamics that immigrants navigate. These are translated into symbols such as doors, walls, ladders to nowhere and ladders leading to the entrance.”

Somewhere Along the Way (201 SW 2nd Ave., Suite 110): Featuring work by dozens of local and regional artists in the atmosphere of a coffee and wine bar. Live music by Mark Miale and Kimberly LeCouteur.

Sweetwater Print Cooperative (117 S. Main St.): Presenting the annual members’ holiday show, “Off the Wall: Sweetwater Fairy Tales,” in which artists in various media take liberties with traditional stories. There will also be many other works for sale right off the walls of the gallery for holiday giving. (Show ends Jan, 23.) After Artwalk, the gallery is open on Thursday afternoons and Friday mornings, or by appointment. (Call Stewart Thomas at 352.514.3838.)

The Bull (18 SW 1st St.): Hosting Celino Dimitroff and his art made from found and familiar objects. “I have been collecting stuff that I found all around in piles that were destined to the dump. I consider myself a middleman of sorts. Not that my impact is big, but I firmly believe that every little bit helps.”

Florida Community Design Center (101 N. Main St.): Hosting Bettianne Ford. “My father and grandfather were both professional photographers. Father instructed me in composition and lighting and how to develop and print photos in his studio. Started taking photos when I was 8 years old with my Brownie Starflash. Digital photography has added another dimension to the art for me. My other love is glass — both warm glass and stained glass. I often design glass pieces based on my photography.”

The Rosa B. Williams Center/352artspace (524 NW 1st St.): The opening of “Blueprints,” showcasing recent works by emerging Florida artist Brett Taylor. The works on paper juxtapose the body, manufactured space and identity. The result is an ongoing construction of built portraits and abstractions depicting the struggle for individuality over physical disability. Note: Exhibit open 7-9 p.m.

The Vine (627 N. Main St.): Featuring art by Nikki McClure with a happy hour that includes a complimentary cheese plate with the purchase of a bottle of wine. “I cut my images from black paper with an X-Acto knife,” Nikki says. “Everything is connected. It is all one piece of paper, yet now it holds a story.” Live music by John Dickie from 7-9 p.m.