The Acrosstown Repertory Theatre begins its 36th season with a sorrowful play by Melanie Marnich that dramatizes the perils many women once faced in the workplace.

And with those opening lines from character/narrator Catherine Donohue, the tone is set for These Shining Lives, the Acrosstown Repertory Theatre’s (ART) 2016-17 season-opening production that will take audiences on an emotional journey into the lives of four ill-fated women.

The play tells the real-life story of four female workers who, in the 1920s, painted the tiny numerals on the faces of watches for the Radium Watch Dial Company only to discover that the luminous compound gave them radiation poisoning.

“They’re good, honest women and, through no fault of their own, they lose everything,” said Laura Jackson, who jumped at the opportunity to direct These Shining Lives for the Acrosstown. “It’s a very touching story.”

The play opens Friday night at 8 at the theater located in the Historic Baird Center, 619 S. Main St. Performances will take place Fridays and Saturdays at 8 p.m. and Sundays at 2 p.m. through Oct. 2. Tickets are $15, with discounts for students, seniors, military personnel and veterans.

“We chose These Shining Lives because it touches on important social issues — women’s rights and labor rights — but is also a funny, challenging, charming and uplifting play,” said Carolyne Salt, president of the Acrosstown Repertory Theatre.

“Not only is the play of excellent quality, the cast and production team are both outstanding, and I’m certain they’ll do this piece justice.”

Emma Grimm, a newcomer to Gainesville and the Acrosstown Theatre but not to acting, gives a praiseworthy performance as Catherine Donohue, a happy-go-lucky wife and mother who must find the courage to stand up for herself while confronting her mortality.

“Catherine reminds me of my grandmother,” Grimm said. “She’s soft-spoken with a wonderful sense of humor and an abundance of love in her heart. But when it comes time to fight for what she believes in, she is a powerhouse. She is a force to be reckoned with.”

In These Shining Lives, written by Melanie Marnich (HBO’s Big Love), Donohue accepts the challenge as lead plaintiff in a lawsuit against Radium Watch Dial Co.

“She [Donohue] surprises me every time we run through the show,” Grimm said. “She makes me feel stronger as a woman and makes me want to be stronger for other women.”

Grimm, 20, is a year older than Donohue was when she started working for Radium Watch Dial. The actor said the best word she found to describe These Shining Lives is elegiac, or “having a mournful quality.”

“I love stories with a dark twist,” she said. “This has a very tragic tone.”

“I think this is an absolutely vital piece,” said Lishawa, an Acrosstown veteran most recently seen as Count Orsino in Twelfth Night. “It’s how these women changed the face of American labor with their courage and fortitude.”

For much of the play, Lishawa plays Tom Donohue, Catherine’s supportive husband. When her fate is inevitable, Tom is devastated but unflinching.

“It’s terrifying and heartbreaking for any person to watch their loved one fade away,” Lishawa said.

Jackson, the director, first heard about the so-called Radium Girls from longtime theatrical designer Michael McShane, who is the lighting director for These Shining Lives.

“He told me about the play, I read it, I fell in love with it, and I felt a calling to tell this story,” Jackson said. “I submitted it to the Acrosstown’s play-review committee and they decided they wanted it to be the season opener.”

Salt said These Shining Lives is similar in structure and narrative to A Piece of My Heart, which the theater produced in May 2015 to considerable acclaim. Instead of focusing on real women’s experiences during and after the Vietnam war, These Shining Lives begins in 1920 as the 19th Amendment was ratified, empowering women with the right to vote.

She said the play fits in well with the theater’s mission to help nurture and develop Gainesville into the center of arts and culture in North Central Florida.

“The ART’s mission is to continually respect and challenge ourselves — as actors, designers, artists and visionaries to achieve more; our audiences — as living, thinking and feeling human beings to engage more; and other local theaters and arts organizations to collaborate more,” Salt said.

Salt is excited about the ART’s new season. The Florida premiere of Commander, which opens Oct. 14, is about the first openly gay presidential candidate. That is followed in December by another edition of the Gainesville Homegrown Local Playwrights’ Showcase, in which local playwrights get the opportunity to see their shows as staged readings.

“Not only does it help these local authors develop and refine their craft, it also allows our audiences to see the newest plays before anyone else,” Salt said.

Also in December is the ARTy (Acrosstown Repertory Theatre Youthtroupe) holiday production, Herschel & the Hanukkah Goblins and The Baker’s Dozen, A Saint Nicholas Tale –— kids’ theatre for kids by kids.

January brings Waiting for Godot, a classic piece of absurdist theatre that is certain to raise as many questions as it answers. In February, ART will stage The Who’s Tommy, the theater’s first musical in several years, in collaboration with After Hours Theatre.

In April, to commemorate the 18th anniversary of the Columbine High School Massacre, the Acrosstown will produce columbinus. The 2016-17 season draws to a close with an as-yet-to-be-announced play in May and a summer Shakespeare production in July.

“We’re a place where people of all ages, races, identities and beliefs can come together in a safe place to make thought-provoking, ‘unsafe’ theatre,” Salt added. “These Shining Lives is challenging to both our actors and our technical people, and should have our audiences talking about the subject for weeks and months to come.” 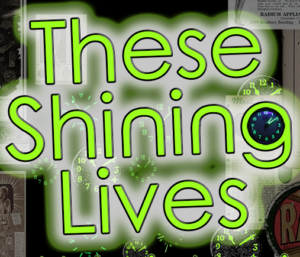